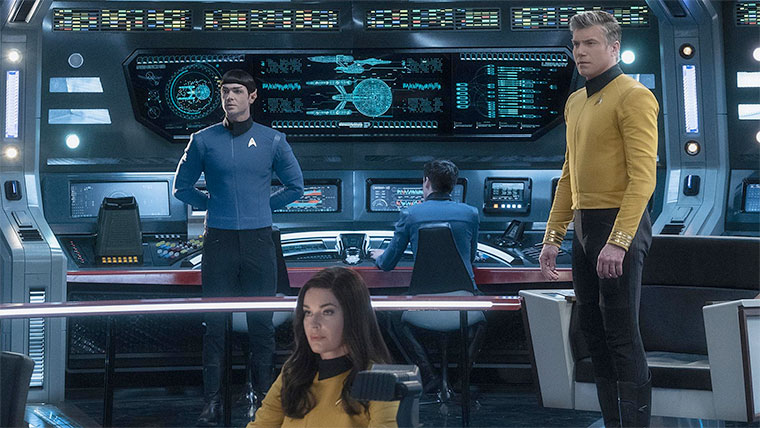 Star Trek: Strange New Worlds is here, which is an interesting coincidence because I just started watching Star Trek: The Original Series, the first show, which debuted in 1966.

Star Trek: Strange New Worlds is the oldest of the live-action shows, set years before The Original Series. I don’t think the timeline matters to anyone. Star Trek fans do not care about the events that occurred before Captain Kirk took the helm of the Enterprise.

But I have a feeling Captain Pike from Strange New Worlds will change that attitude in the next few weeks. We met Pike in the second season of Star Trek: Discovery. Despite its success, some viewers rejected the first season because of the darker, grittier future it painted.

Older fans expected Discovery to embrace the style of previous shows in the franchise, notably Star Trek: The Next Generation. These fans wanted to see an optimistic show that celebrated humanity’s strengths, reveling in the wonders we could achieve by eliminating trivial conflicts and pursuing enlightenment above all else.

Their ideas failed to win me over because the show they described sounded bland and unappealing. But then it happened. Anson Mount’s Pike walked into the frame and blew me away. The character was the physical manifestation of The Federation: strong, compassionate, indomitable.

Pike uttered lines of dialog that would have nauseated me had they come from any other character. I get what the writers wanted to do.

But the absence of subtlety in Pike’s dialog was disappointing. The character went on and on about duty and honor, and rather than dismissing him as a self-righteous buffoon, I applauded Pike because, in his words, I saw the glorious vision Gene Roddenberry had sought to depict when he created Star Trek.

A few days after that, I began my journey through Old Trek. To this day, that second season is still my favorite of all Discovery’s seasons. And now, Pike is back, and instead of another supporting role, they have given the character his own show.

The first episode came at the perfect time because my interest in the Star Trek franchise was starting to waver. My journey through Old Trek ended with Star Trek: Voyager.

Then Star Trek: Picard came along, and after a highly entertaining first season, the show water-boarded me with a dissatisfying second season. Granted, I have not finished it, but the five episodes have seen so far have been an utter disappointment.

Admittedly, this is not a complete surprise. I had a feeling the show would get mired in contemporary politics the moment I learned that the season would throw the cast back to the 21st century, but the show exceeded even my worst expectations.

By the time I ditched the season, Star Trek: Picard had abandoned its sci-fi roots to do political commentary about life on earth today.

Discovery’s 4th season was only slightly better. They basically did the opposite of season one. It is almost like they wanted to course-correct and, in so doing, went too far in the opposite direction. The season had a movie-quality sheen. Star Trek has never looked this good.

But it had no real substance, and every problem had a boring solution because none of the antagonists were genuinely villainous. Do I expect Star Trek: Strange New Worlds to fix these issues? I expect the show to entertain me and episode one did not disappoint. I’m hopeful.

I need this show to stick the landing. A solid first episode is not enough. I need an astounding season of episodes. Otherwise, I may abandon Star Trek altogether.