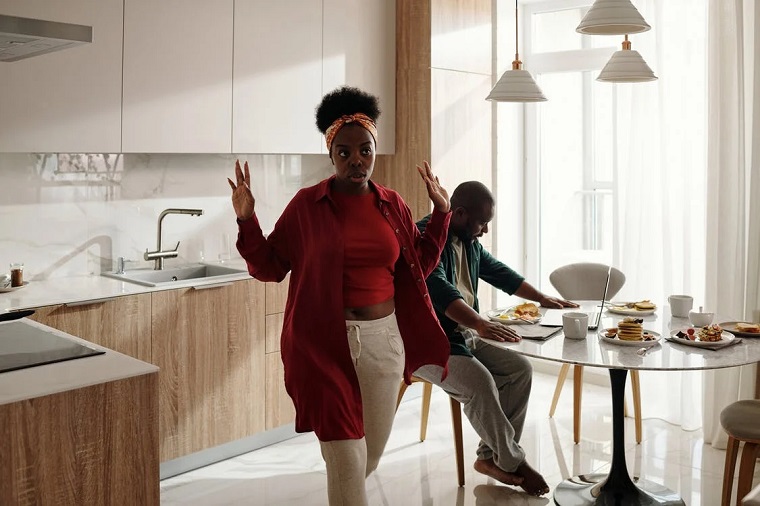 “I’m sorry, looks like he sensed his daddy was around and woke up,” I said apologetically, as I rejoined Julie in the living room, this time with Junior in my arms.

“Oh no; I was hoping he would sleep for at least an hour,” she groaned tiredly.
“I’m happy to hold him; you look really tired, are you alright?”

“Yes, I’m fine; he just didn’t sleep well last night, so I’ve got a bit of a sleep debt, that’s all.” “Sorry,” I answered sympathetically. “But, like I said, I’m happy to hold him for you while I’m here.”

“Thanks; dinner is ready, but if you can keep him while I clean up after it, that would be great.”

It was clearly time to break the news that I would not be around that long.

“Unfortunately, I can’t stay till then,” I answered apologetically.
“What do you mean? Why not?”

“I’m sorry, like I said when I came in, it’s been a long day and I’m just really tired.”

“You being tired from work isn’t anything new; I thought that’s the reason you came here – to relax, unwind and have dinner. What’s changed?” she demanded, her tone a mixture of hurt, confusion and bridled anger.

“Nothing has changed; I just want to get home and not have the thought of traffic and driving hanging over my head,” I tried to placate her. It didn’t work.

“Why do I think this has nothing to do with traffic, and everything to do with your wife showing up at your parents’ house? You did not stay for dinner yesterday either, yet you weren’t tired from work then. I think you’re scared of her; I think her finding us there has put you in a corner that you’re trying to wriggle out of!”

She had hit too close to home for comfort, and it got me edgy and defensive.

“For goodness sake, that’s my home; I shouldn’t have to explain going home to it!” I snapped.

Her eyes widened in shock like I had hit her, then narrowed in anger.

“Well in that case, you should go right now; don’t let Junior and I keep you when there’s somewhere else you would rather be!” she shot back.

I had expected her to be hurt, not angry; so, I was not prepared for her reaction, and opted for flight rather than fight.

“Fine; I don’t have the energy to argue with you; so, I’m just going to go and see you tomorrow,” I answered as I picked up my keys and stood up.

“Why? Won’t your wife be waiting for you tomorrow as well?” she retorted snidely.

I did not answer her as I walked on to the front door and out of the apartment.

After Kenneth had dropped Junior and I back at the apartment that morning, I had eventually managed to get Junior to go to sleep, but did not have that luxury myself; there was laundry that had been piling up that I needed to get done and cleared away, and knowing how particular David was about a clean house, I wanted to make sure the apartment was spotless before I tried to get some sleep myself.

Both chores were constantly interrupted by Junior waking up to either be fed, have his diaper changed, or simply held; so, by the time I finally completed them, it was time to get started on dinner and catching some sleep myself was out of the question.

After all that, for David to just walk out less than a quarter of an hour after he had arrived, was hurtful, confusing and infuriating to say the very least, and my first impulse was to sink onto the floor and cry my eyes out.

I was about to give in to that impulse, when my phone rang and thinking it was David calling to say he was sorry and on his way back, I eagerly snatched it up, but it wasn’t him; it was Kenneth, and I hesitated for a second before answering it.

“Hello.”
“Hi Julie, it’s Kenneth; I hope I haven’t caught you at a bad time, I was just calling to find out how Junior is doing,” he explained, his tone almost apologetic.

The sound of a kind, caring voice when I was at my lowest broke something within me. “He’s fine,” was all I managed to get out before bursting into the tears that had been threatening from the time David walked out.

“I’m on my way,” he answered firmly, and before I could respond one way or the other, the line went dead.

After I left the boutique, I passed by a supermarket; so, I had not been home for very long when David arrived a few minutes after six.

“You’re early; I wasn’t expecting you back for at least another hour!” I exclaimed in surprise.

“I know, but I was tired and decided the reports I was working on could wait till tomorrow,” he explained, as he greeted me with a peck on the cheek.

“True, but it was a long day and I had had enough; besides, I would rather be home with you and the children than slaving over reports,” he shrugged with a smile.

Something about his smile and answer reminded me of last night and got me flustered; this was definitely a new David, and I certainly preferred this version.

“The children are upstairs; why don’t you go on up, see them and freshen up and I’ll check on how far along dinner is,” I suggested.

A quick cursory inspection of the pots and pans the maid had on showed that dinner was still at least an hour away; so, I put a bottle of wine that I had picked up at the supermarket in the fridge to chill, then left the kitchen in the maid’s capable hands and went off to find my family.

That he was home this early for the first time in a long time proved to me that he had indeed turned a new leaf; after all, since I was not expecting him this early, he could have gone to that whore and their bastard after work, and yet he had chosen to come home to the children and I.

It was definitely an encouraging sign, and one that reassured me that I had done the right thing in turning down the shopping trip for the boutique – there would be other shopping trips in the future, now was the time to focus on and explore this new chapter in my marriage.