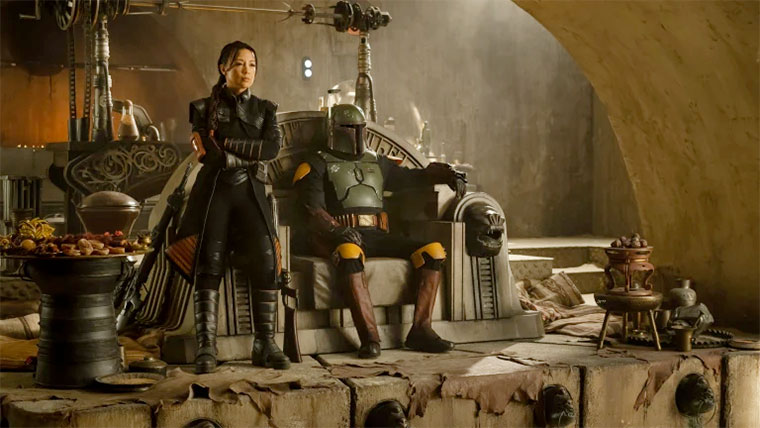 ‘Oh my goodness! That was amazing!’ is what I wanted to say after watching The Book of Boba Fett. But as far as debut episodes are concerned, this one was very tame.

The Mandalorian had a stronger premiere. I wanted to watch the original Star Wars trilogy before The Book of Boba Fett came out. That was a month ago. For some reason, I keep dragging my feet. I watched the first 25 minutes of Episode 4. Not very compelling.

I did the same thing with Star Trek: Picard. I had a feeling that learning about Picard’s backstory would improve my appreciation for his show, and I was right. After binging seven seasons of Star Trek: The Next Generation, Star Trek: Picard was a far better show.

In fact, after watching TNG, I grew to appreciate Star Trek: Discovery, a series I had tried and failed to enjoy before. I was aware of Boba Fett’s origins, sort of. I knew he made a brief appearance in the original trilogy before falling into some kind of pit. I also knew that the character was immensely popular despite his limited screen time.

I vaguely remember the bounty hunter from the Star Wars Prequel Trilogy. Though, it took me several years to realize that Temuera Morrison’s character in Star Wars Episode II was actually Jango Fett, not Boba Fett.
Boba is Jango’s clone/son, which is why they look alike. I don’t know if you’ve noticed, but Boba Fett’s backstory isn’t particularly complex.

Like The Mandalorian, you don’t have to watch every single Star Wars film to understand The Book of Boba Fett. At no point during the first episode was I lost.

I appreciate the concept. The Boba Fett we know is a solid, stoic, seemingly invincible figure, and he maintained that façade during his appearances in The Mandalorian.

The Book of Boba Fett peeled back the layers to reveal the man hiding beneath. This Boba Fett wants to rule the underworld on Tatooine, but he has no intention of maintaining the same iron grip that allowed his predecessor to succeed.

Boba wants to rule with respect, a tactic that quickly backfires when the bounty hunter realizes that some of his subjects have no interest in bowing to his rule.

Boba is clearly out of his depth, and most of us will take great pleasure in watching as he slowly rises to the challenge, finding that balance between cruelty and mercy that he requires to keep his new empire in check.

I hope that happens sooner rather than later because this season has seven episodes, and the 23-minute premiere did nothing to whet my appetite. I have every intention of watching episode two, but only because I like Boba as a character, not because episode one gave me any reason to return.

Take my familiarity with this character away, and I would have abandoned this show here and now. On a positive note, Boba and Fenec are great characters. Fenec is what we expected Boba to be: tough and quick to anger. The assassin contrasts sharply with Boba, an older figure with several years of wisdom.

I was never bored because Boba and Fenec are entertaining. But their chemistry isn’t enough to keep me interested and I don’t care for the flashbacks.

Long-time Star Wars fans will love them, but new fans like me don’t care about that journey. We want to see what comes next. The Book of Boba Fett has a lot of potential, but the second episode has to give me a reason to stick around.