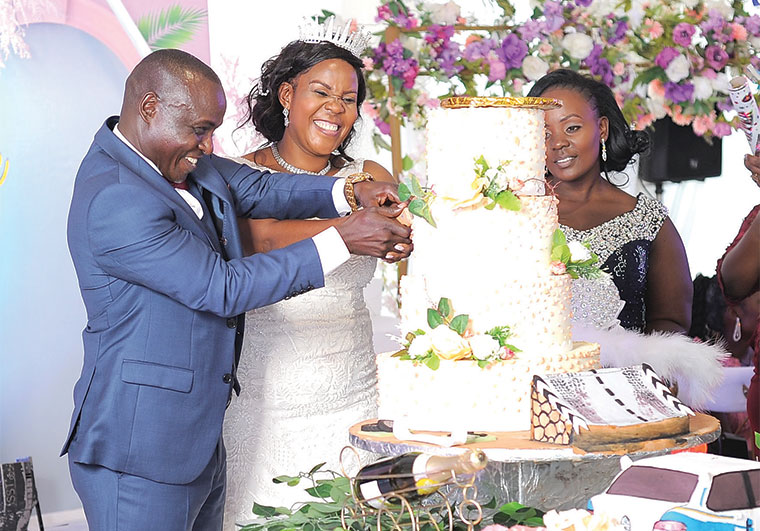 Talking about marriage, it is one subject every couple that has officially been wedded can testify to as a walk of life with ups and downs.

For the newlywed celebrated motorsport couple of Ponsiano and Rose Lwakataka, who walked down the aisle on October 15, 2021 at Lubaga cathedral, the milestone was all the sweeter because they had been cohabiting for decades. Not many in their setup get to hear the wedding bells at all.

The lovebirds met in 1993 when Ponsiano Lwakataka was 18 years old and Rose, then Nassonko, was only 15. It was at a tailoring shop owned by Rose’s aunt in Kyotera town, where Ponsiano first laid eyes on the young Rose there to learn the craft.

“Rose’s father, the late Francis Muwanga, who had nurtured me in business like a grandson, used to brag about his beautiful daughters. I secretly reserved it inside my heart that one time I would land on them,” Lwakataka told The Observer.

Lwakataka, who says at 18 years of age he was already financially sound, made his first move on Rose with several lift offers to her and her elder sister on his motorbike, a Honda 50CC, but in vain. The two sisters would totally ignore him and walk back to their home in Buzirandulu, some kilometers away from the town, when not picked up by their father or uncle on any day.

“On another occasion I stalked Rose and she still gave me a cold shoulder; so, I decided to abuse her, telling her how she wasn’t as beautiful as she thought,” Lwakataka recalled.

At this, the couple exchanged looks at the memory, then burst into loud laughter. It was only three months later when Ponsiano resurfaced through a messenger, that Rose finally gave him an ear. To make their moves quicker, Lwakataka convinced his friend Stephen Kyambadde to woo Rose’s elder sister, a move that was successful.

One day through the messenger, Lwakataka sent Rose a message asking her to come to his rented bedsitter and help wash his clothes. She accepted and came over.

Rose quickly jumped in, reminding Lwakataka: “Ojukira olunaku olwo wampamba? (Do you remember how you abducted me on that day?)” Lwakataka had locked her in his single room and walked away, in a well-hatched plot, only returning at 7pm, knowing well it was well past Rose’s curfew to be back home.

The following morning, like a hunter who had netted his quarry, Lwakataka walked into the home of Mr Joseph Banasula, a friend to both families, and asked him for a favour.

The favour was to go to Mzee Muwanga’s home and inform them that their daughter was safe, despite going missing for a day. Additionally, Banasula was tasked with asking them for approval for their daughter to marry Lwakataka. Since Muwanga knew Lwakataka as a hardworking young man, he never hesitated.

The two started their courtship officially. Six months later, Rose conceived their first child, Ronald Bosco Kiggundu. On the eve of Kabaka Ronald Mutebi’s coronation day in July 1993, the couple remembers that Lwakataka, escorted by a few elderly men, went to the Muwangas’ home to be officially introduced (kwanjula) and Rose was handed to him customarily in marriage.

Two years later, Lwakataka, then dealing in fish and coffee, was imprisoned in Tanzania, leaving behind the teenage mother in a rental muzigo. In January 1996 when he was released from prison, surprisingly he found that Rose had completed building two rooms of a house he had started building before imprisonment.

“I was shocked to find a girl of her age still waiting to for me,” confessed Lwakataka. Not only was she waiting, but she was also furthering their dreams.

“This sent signals to me, of how God had given me true wife material.

“We finished our first house in Kyotera, and my first gift to her was a car. God blessed us more financially that in 1997 I started my racing career with motorcycling.”

Lwakataka admired then great racers such as Mzee Wycliffe Bukenya and a mechanic called Kamoga.

“I actually bought 10 racing bikes at once and formed a motorcycling club, then enrolled riders including George Ssemakula of current Semka Racing Academy, Derrick Sserunjogi, Christopher Kyembe currently based in South Africa, Matovu and others.”

After breaking his right leg at a race at Nabugabo sand beach in 1999, Lwakataka decided to quit bikes and instead joined motor rally in 2000.

“My first car was a Toyota Levin Supercharger that I bought from then Sgt Ismail Lule,” he said. “It was my maiden year in rallying that I finished seventh overall in the prestigious Pearl of Africa rally championship (2000). I have never looked back, to-date.”

“She joined me in 2002 in Kyebando, where I had rented two rooms. Fortunately a year later, we were able to buy a plot of land in Erisa zone, where I built my first house in Kampala.”

“I remember Ponsiano got annoyed when he found us occupying the unfinished house! I just didn’t want to incur any more monthly rent,” Rose interjected.

As a ‘punishment’ for moving into the unfinished house, Lwakataka abandoned his home for a week, only sending necessities.

“I used not to tell Rose my plans; even when I bought my first rally car, she just saw it at our muzigo,” lightly bragged Lwakataka.

“Although she continued to support all my activities and businesses, I rallied for seven full years and later interested her in the sport.”
Lwakataka said, as one way to account for the excessive budgets that went into motor rally, he offered Rose a chance to race as he acted as her manager.

The couple does not regret having joined the sport, as they made many lifelong friends and found a mutual hobby to bind them closer.

“I met Suzan Muwonge in rally; she became a sister to me and has been supportive since,” said Rose, when asked about her gains from rally.

She prematurely exited the sport at a time when it became so fractious and character assassination had become the order of the day.

“In 2009, I returned to rally using the same car my wife had been driving,” Lwakataka said.

Between the trophies, business triumphs and setbacks, the Lwakatakas were yet to take the final leap as regards their marital status.

While customarily they were legally married, it was important for both of them to solemnize their union in church. And 28 years after that Kyotera kwanjula and seven children later, Lwakataka, 46, made 43-year-old Rose’s dream of a white wedding come to pass.

Why it took so long? Lwakataka philosophized saying, “women change. Also we were still young”. 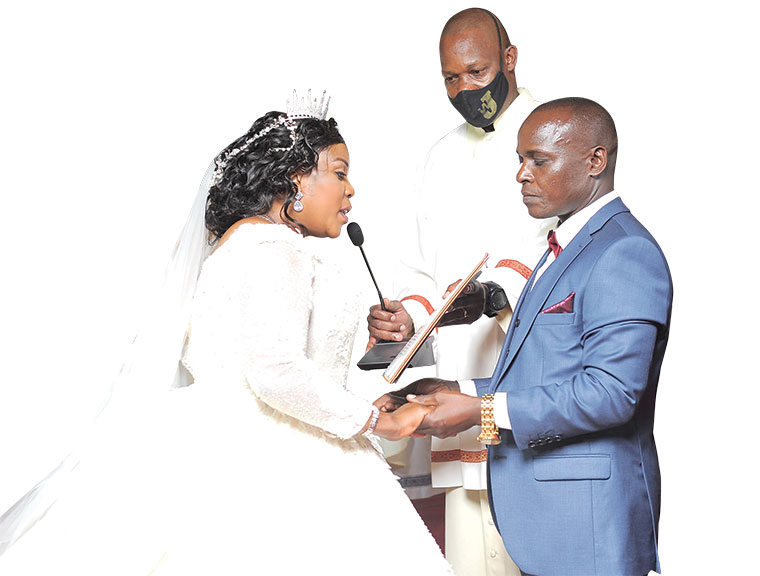 He said before taking that final leap, he had to take her through different tests, including setting up different men to try and woo her, and she passed each of them.

“Secondly, we wanted our children to be witnesses to our wedding when they were old enough, something we have fulfilled,” Lwakataka said.

Rose said: “I loved him as a person, and I grew up knowing that once you marry, you are fully in it.” For her, it was never about anyone else; only Ponsiano.

However, in 2014 the couple was struck with a bigger challenge, when Lwakataka was imprisoned and charged with murder. Stemming from an incident from his fish business, a man had been shot and killed and Lwakataka was pinpointed as the ‘murderer’.

It was this moment that Lwakataka considered taking his marriage vows with Rose from prison, because he thought he would surely spend the rest of his life there. Fr Bonny Ssebyanzi, who used to visit him in prison, had demanded a wedding from the couple for years.

“While in prison, I promised Fr Bonny that if I managed to leave prison, I would wed my wife to glorify the Lord. I kept my visitor’s registration book while in prison; those were the guests I wanted to witness my wedding.”

In 2015, the High court at Masaka acquitted Lwakataka and he set about fulfilling his promise to the priest. He was set to wed in 2020, but Covid-19 happened and they postponed the wedding “until we couldn’t hold it anymore and decided with pain to host a few guests”.

“The only way I could thank my wife was to wed her in holy matrimony. We have been blessed with six boys and one girl. Four of the boys are done with education,” Lwakataka said.

Ronald Kiggundu is a civil engineer, David Mugema is into agriculture, Brian Lukwago is an accountant “and he is our area councilor”, and Paddy Kafeero is a statistician.

“Outside rallying, we are businesspeople; we trade in fish. Rose helps sell the fish in Congo, does some farming in Kitagobwa and Kapeeka,” Lwakataka spoke with pride.

“I am planning to do serious commercial farming in future,” Rose chipped in.

Lwakataka has also invested in sand mining, and plans to start a hardware business, in addition to a driving and rally school to impart his skills.

“A rally academy will help keep my legacy in the sport. Our simple advice to those who are not yet wedded is, take your time…marriage is not a bed of roses.”