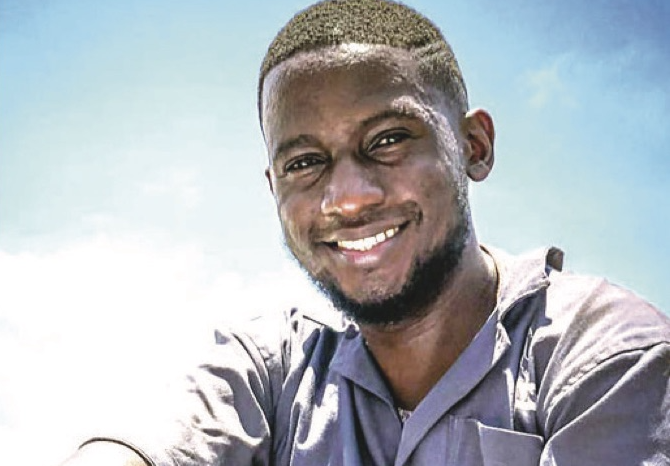 UNCLE MO, real name Moses Kiboneka, is a youthful engineer, actor and comedian whose satirical take on trending issues has turned him into an online sensation.

He does his comedy in the comfort of his garage in Kireka, wearing his overalls and looking every bit the makanika. Quick Talk caught up with him at Nyange Automobile Workshop in Kireka for a chat.

How would you describe yourself?

My real name is Moses Kiboneka. I got Uncle Mo as a nickname from my friends. I am a guy who has interest in both sciences and arts. My day job is totally science [mechanical engineer] and my hobby [comedy] – which is also becoming a job now – is arts.

I actually met arts before I met science, because I started acting and being on stage back in nursery school before I even knew that

I would specialise in sciences. I used to be in music, dance and drama at school. I actually wanted to be a lawyer, but my father told me to get into engineering [studied electrical engineering at Kyambogo University]. Later I continued with my studies and fell in love with science because of its realism. Sciences were just very easy.

So, how does an engineer turn into a comedian?

I come from a family where people are effortlessly funny. I was the kind of guy who looked at things and said funny things about them.

In 2010, I got into Rotary Club, where I met someone who used to work at NTV, who told me I could do a show like Trevor Noah’s Daily Show. I wrote a script, took it to NTV where I met Moses Serugo, who promised to push it for me so that it gets on TV. Unfortunately, Serugo left NTV and everything stopped there.

In 2016, there was a Rotary Club which organized a comedy fundraiser and my club won. The winner was given a chance to go to Comedy Files at Theatre La Bonita and perform a stand-up comedy skit there.

But the second time I performed, it was at Laftaz bar and I struggled with my punch lines, because very few people there understood English. When I walked out of there, I vowed never to do comedy again. I resorted to writing reviews of different events in the country and posting them on my social media pages and many people liked it.

This concept of shooting skits from your garage, how did you come up with it?

When Covid-19 struck, I used to come to the garage but there was no work, because [of the lockdown]. We were so idle I was even getting depressed. In those moments, I started to write and send the script to my friend who had promised to help me shoot if she liked it. She liked it and we started planning to shoot.

However, I did not have a place to shoot from, because I wanted a set like the Daily Show with desks, lights... But the guy I went to request to shoot from his office jokingly told me to go shoot from my garage. We laughed about it, but I later realised it’s a good idea.

I got back to my garage, put on my [overalls] and we shot from there. I just wanted to be a person communicating his opinion on stuff, but over time I refined my craft until the day people said I am a comedian. I would be lying if I said from the beginning I wanted to come out branded as a comedian; my work just launched me to be the comedian. [I was aiming for] observation satire.

So you are the people Covid-19 has been a blessing in disguise to!

Honestly, I can only see it now. I started shooting in July last year and between July and November, I did about 16 videos. It was not easy; I reached video seven and I felt tired. I wanted to shoot one more video then give up.

The video I shot was ‘what if Uganda hosted Big Brother’ [the video has a very funny spin on the Big Brother show, in relation to Ugandans’ stereotypical nature. Quick Talk still remembers the hashtag #PayMwebe from this one].

I was tired of doing this; in that video I was even sleeping – not that I wanted it to be like that, but I was tired mentally. Surprisingly, it went viral and that is what made me come back to do this. Before that video, I was not enjoying myself like I am now. It is now that I can look back and appreciate the hardships I endured and didn’t stop. [Otherwise], it was just an alternative to not be idle.

What do you consider [being] shooting a skit?

It is important that what I want to talk about is in the news, because that way it is relatable and easy for people to get interested. It also has to be relatable to people beyond Uganda. Even if I am talking about something in Uganda, I should be able to give it a regional touch.

Some perceive your kind of comedy as being for the elites and urban people. Is it so?

But the muntu wa wansi is the most well-fed person when it comes to the comedy circuit in this country, because almost every comedian is working for them. I wanted to do content that speaks to me, because the first person you are going to sell your product to is yourself.

Truth is, the people who enjoy my kind of comedy are fewer compared to the other genres, but I chose this because although the other one is an easy road, it is packed and there [is a lot of competition].

But along the way I have learnt that the people who listen to me are effective buyers of products and even the endorsements I get are different [He has worked with international brands such as Fireboy, Adebayor, Nandi, Prudential, Guinness] and crafting my comedy like this makes it go beyond Uganda while maintaining a local audience, because I tell Ugandan stories.

Which is your favourite skit, so far?

The one I did for DTB bank vs Ham [Kiggundu]. I even kept laughing at my own lines while shooting. No wonder it went so viral. There is also the one I did recently about the Dubai Expo. Those two for me are the videos I have shot and was like, “Why am I silly?”

How big is the team you work with?

It is usually me and one other person on camera, though sometimes I can have an extra person to help make sure I am at par with the script. I am easily distracted when I have so many people on set and forget my lines. That is why I also usually shoot on Sundays when there are few people moving around.

[Promptly] I perform in a motor garage [bursts into laughter]. My set is so different and it makes the show stand out. I do the same funny stuff people do on stage, but I do them at the garage.

What else do you like doing away from fixing cars?

I am an events MC. I enjoy emceeing. Other than that, I am always at home chilling, resting, sleeping. I enjoy being in my own space recharging the batteries to start again.

What is that one thing your fans would be surprised to know about you?

[In a mock whisper] I am actually very shy. I have done over 50 videos so far in a space of months, but I never get used to people. I am the performer that doesn’t like to look at people.

Wow. But were you a naughty child growing up?

I was actually quiet. I come from a family where people are very talkative and very funny and I am the fifth born of six; so, they had all the airwaves. I talk now because I have authority over saying funny things. All my siblings were very loud people; so, I grew up quiet, but it didn’t take away that fact that I loved to speak.

But are you people really earning from these online platforms?

YouTube [his channel, I Am Uncle Mo has more that 18,200 subscribers] pays us per month if you are monetized and people are watching your content. But on top of that, the more you put up work and people watch it, brands start realizing that you have influence and you start getting endorsements because you can deliver a message.

How far do you wish your career to go?

For me, my win is influence; so, I want to have as much influence as possible. If one day I am doing this and the whole world is watching, I will have won. For now, what is more important to me is development, because the more you keep on doing it, the better you get.

[Speaking to Uncle Mo, it is easy to forget that this guy is actually an auto mechanic – a job a tweep recently said, he does even better than the comedy.]

Born [he declines to say when] and raised in Kireka to Moses and Maureen Sserwanga.

An alumnus of Budo Junior School and King’s College Budo, Kiboneka was admitted to Makerere University for a bachelor’s degree in Statistics, on government sponsorship.

The same year, Kyambogo University offered him a bachelor’s degree in Electrical Engineering on private sponsorship; he took up both offers, attending day and evening classes at the respective universities, because he wanted the stipend that came with the government sponsorship.

At university, his brother invited Kiboneka to work part-time at Nyange Automobile Workshop, where he digitalized their invoicing and payment systems at a fee, but also discovered his love for auto mechanics.

Today he is partner and general manager at the same garage, and has never really practiced electrical engineering.