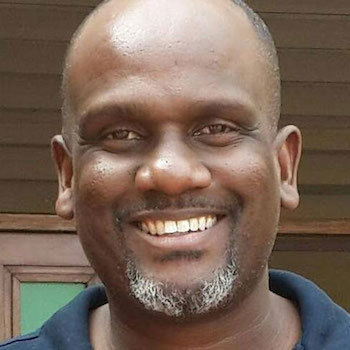 Luswata, 47, is one of the most recognizable faces and names in Uganda’s theatre and arts. Currently starring in popular TV series The Honourables on Pearl Magic Prime, Luswata is mostly credited for his pioneering role in Uganda’s standup comedy genre, where he started Theatre Factory many years ago, which gave birth to almost all the outstanding comedy outfits we have today. After pleasantries:

What inspired you into becoming an actor?

I had a big interest in fine art from the word go and my passion was for clay and modeling but I didn’t get the marks for BIFA [Bachelor of Industrial and Fine Art], so I settled for my second choice, which was drama. I had no other choice than those two [Quick Talk is sure Luswata would have made a great fine artist too!]

You have quite a catalogue of works; which is your favourite?

I love the fact that I was offered the unique opportunity to act in Alex Mukulu’s 30 Years of Bananas as Kaleekeezi, and I pulled it off in the modern days.

That was a jackpot for me [the critically acclaimed stage play to mark Uganda’s thirtieth independence anniversary in 1992 was a brilliant satirical view of Uganda’s journey through the years, as seen through the eyes of Rwandan refugee, Kaleekeezi.]

Acting as Kaleekeezi and then, Macbeth from Macbeth by Shakespeare, I felt [the characters] earned me bragging rights when I did them.

What is the future for theatre with the pandemic woes?

Theater is experience and stories, and without these two ingredients, it is not theatre. Imagine that the stories brought up die as a result of Covid-19. Theatre may die because of the hardships resulting from Covid, but [that is not what] defines theatre. Theatre will prevail and emerge even more accountable than before.

What about the film industry?

For that, I am not yet able to define what shape or form our commercial film practice takes in Uganda.

All Quick Talk knows about you is acting. Do you have any other hobbies?

Acting for me is not a hobby; it is a way of life. Even better, acting is a vocation as I practice it professionally and teach it at the university.

Oh okay! I’ll rephrase that: Besides acting, what else do you do?

I teach theatre and film at Makerere University, but I will soon go into farming in Bweyale.

Tell me about your family life; how many children do you have?

I am a married man for more that 10 years to Irene Wanjiru [they met on the set of Makutano Junction], and I have three children. Two daughters and a son.

Do you have a mentorship program for those who admire you?

I believe that God landed people like us where we are now so we can share the gifts he gave us. I hope the atmosphere will be created for people like me to be able to share before we expire.

Was your family always on board when you chose drama?

I’m not sure about this, but the reality is that choosing acting in East Africa is not being supported by the family. It is individual sacrifice. It is hard to convince family that you are up to any seriousness when the ground you operate on is not level for such circumstances.

Who is your favourite actor?

None. I train everyday to be the best actor for me, but I continue to fail at that. But I will get there.

Are you still actively in comedy?

I laugh and smile everyday with my team. Comedy is not a vocation to me but it is part of life. Either you choose to live your life with a smile or live it with bitterness. I choose the former.

You were also quite the hit in Makutano Junction series. Is there any hope for Ugandans to have such a community series again?

That was a Kenyan show. We are currently producing Mpeke Town, which is the Ugandan equivalent to Makutano Junction; so, we are on the right track.

You seem so confident in everything. Have you ever had stage fright?

In my view, any performer who does not have fear for their next act is a tragedy for performance. Stage fright is a good measure for the respect we have for the craft. I am always afraid when heading for performance [oh, wow! It never shows].

Due to the pandemic, most actors are dormant…

It is terribly sad in this situation, but the [best] time for actors is now. That is something we didn’t have as we would jump from show to show. It is now a great opportunity to go from A-Z in our minds; it is time we explored our creative potential.

Where do you see Uganda’s film industry in the next five years?

Promising; we have the potential to grow a market now, thanks to the television stations that now see the value in buying and paying for content. We are good but will be much better.

ο Born Philip Kafuluma Luswata, he has been active on the theatre scene for 25 years.

ο He studied music, dance and drama at Makerere University and has a master’s degree in Communication from Leeds University.

ο He is renowned for productions such as Queen of Katwe and Makutano Junction, which he also wrote and produced, as well as Maka Close, Barbed Wire, Egoli, The Honourables and Crazy Storm, among others.

ο Theatre has taken Luswata places, including for the Royal Court Theatre residence in London and to Sundance Institute Theatre Lab in Utah, USA.