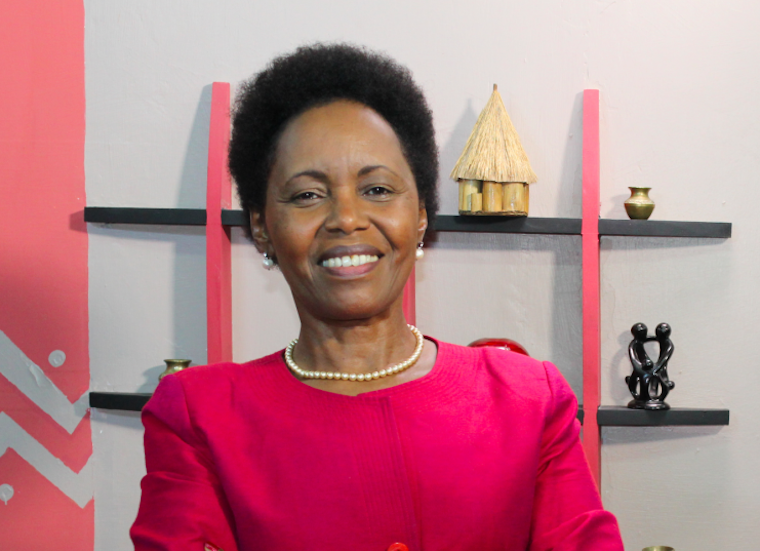 One cannot talk about trailblazers in East African journalism and not mention Rose Wairimu Kimotho, 65, and how she is among those that paved the way for women in the media.

The Kenyan entrepreneur, advertising executive, media owner, founder of Kameme FM and K24 TV (the two broadcast stations have since changed ownership) and founder/ managing director of Three Stones Ltd has been in newsrooms since 1978.

As she talked to more than 180 women journalists from across Africa last Friday, the awe and inspiration in the virtual room was enviable.

Kimotho remembered walking into her first newsroom at The Weekly Review in Kenya in 1978 and noting how much of a man’s world it all was then.

“The sound of typewriters and cigarette smoke filled the air. I joined with [fellow apprentice] Peter, who was immediately assigned to the political desk – he was put in the thick of things, while I was put in the gentle side covering art and beadwork. That was my first encounter with gender discrimination in the newsroom,” the veteran journalist told her attentive listeners.

Kimotho was the maiden mentor at the quarterly WIN Media Lounge, which has been started so that women journalists have a space where they can be mentored and helped by their more experienced colleagues.

Kimotho shared her story of how she had to leave journalism due to frustrations similar to those that affect younger journalists today, to try her hand at advertising, and ended up excelling in that field too.

When Ugandan journalist Eunice Kasirye asked Kimotho how she balanced her career and social life, the mother-of-one, whose husband is David Kimotho, shared how she regrettably put her career ahead of her personal life, only having her first child at 39.

“I didn’t have a life per se. If I could turn back the clock, I would do it differently. Even with my son, I was not there a lot; the house girl was feeding him and putting him to bed. I justified it by saying that I was doing this for them,” Kimotho said.

“But you look back and you don’t even have the business anymore! So, get your balance right; nothing is more important than your family and kids.”

In 1999, when Kimotho’s son was only four, she was busy as MD of Regional Reach Ltd, and the company was setting up Kameme FM, Kenya’s first vernacular language radio station that had taken advantage of Kenya’s liberalisation of the media to do things differently.

Eight years later in 2007, she started K24 TV, her country’s first news-only channel, delving into the kind of bulletins and clientele that KBC and KTN were not covering. But due to Kenya’s post-election violence of 2007 and bad loans, Kimotho lost both the FM and TV stations to new owners, although she is still proud of her legacy, because she “trained very many journalists” at K24.

At the time, the TV station also recruited Jeff Koinange, who had just left CNN in a shroud of scandal, but was still very much a celebrated journalist back home. He has since left K24 for Citizen TV.

From the reactions of the journalists in the ‘room’, Kimotho’s story of burying oneself in a job and sacrificing family resonated with many women, who still feel they have to postpone their social lives if they are to get their media careers going, in an either/or choice.

“It doesn’t have to be that way,” Kimotho told them.

The WIN lounge started off as a huge hit as women journalists could finally offload in a safe space and among peers that have been there, done that.

When one journalist complained that she had been on ‘probation’ for three years in a newsroom where her boss seemed to be expecting sexual favours before he could confirm her on the job, Kimotho provided the webinar’s catch phrase: “People will put a value on you basing on the value you put on yourself. Set your price and set your value.”

The young journalist possibly left the webinar to go resign at her non-job. Kimotho is no stranger to the macho jokes packaged as newsroom banter, being pestered for dates and temporarily being hounded out of the profession because “this is not what I had paid for to study at Nairobi School of Journalism”.

When she felt that early newsroom was not taking her seriously enough, she left and joined the advertising industry as a copywriter, and actually gained a respectable level of fame while there. But her heart was beating for journalism, still.

The highly respected journalist in the region once chaired both Kenya’s Media Owners Association and Marketing Society of Kenya; she is currently is the managing director of Three Stones Ltd, a digital media station modelled after the traditional African fireplace, hence its name.

The fireplace (ekyoto) was where storytelling, sharing and grooming happened before the era of TV, radio and social media turned everything on its head. Kimotho said that is why spaces like the Media Lounge are vital, because it is important for young women journalists to have a mentor.

“In my time, men didn’t consider it sexual harassment to talk about your legs, or tap you on the back... find a mentor you can run to,” she advised the myriad of women journalists that signed in, at least 30 of them Ugandan.
She encouraged them to “go after the jobs you want to do”.

“By nature, we women always question how good we are – the imposter syndrome – we feel we need more qualifications, more books before we can go for it...[but] things don’t land on your lap because you are a woman,” the Columbia Business School alumna said.

Until May 2021, she was a board director for Stanbic Bank Kenya, just one of several boards she sits on. At the lounge’s launch last Friday, WIN’s Melanie Walker said African women already have a culture of mentorship, and “this is an incredibly powerful tool”.

Barbara Kaija said, “We need to be that bigger sister. If women don’t stay in the newsroom, their stories will not be told. From every five stories, only one is told from a woman’s perspective.”

“The newsroom can be very lonely as a young woman journalist when you join and there is no one to talk to,” she added.

The next media lounge will gather women journalists in December.

The number of women in leadership roles in national parliaments has doubled over the past 25 years, but their voices are not heard in the news. Male counterparts dominate. In political news coverage, men’s share of voice is up to seven times higher than that of women.

In the last two decades, the use of women as experts in news coverage has diminished in comparison to that of men. Only 15-30 per cent of news sources were women.

Only 26 per cent of media leadership positions globally are occupied by women. - Extracted from Carolyn Byerly’s Global Report on the Status of Women in the News Media, 2020.