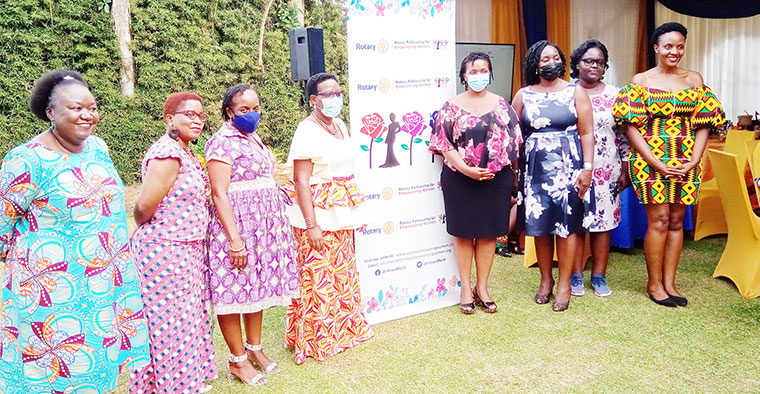 Rosette Nabumba (4th left) and other Rotarians at the launch. Extreme right is Blessing Owomugisha, a beneficiary of the Rotary Fellowship for Empowering Women Initiative

The Rotary Fellowship for Empowering Women officially launched in Uganda on September 4 and joins a global programme by female Rotarians dubbed the Rotary Roses aimed at fostering women leaders.

During the launch held at the residence of Rotarian Rosette Nabumba in Luzira, the occasion celebrated sisterhood through which women also mentor each other.

As JOHN VIANNEY NSIMBE writes, it was a landmark event to demystify gender stereotypes on skills and jobs, enabling women to dojobs for a livelihood, that were hitherto known to be a male forte.

Between July 2020 and June 2021, Trucua Letaru, 24, was among 100 women, who got new skilling through the Rotary Fellowship for Empowering Women programme. And right now, Letaru is a certified carpenter. She is enjoying making home furniture, but also a realization of a calling, that perhaps was stifled, because of perceptions.

Letaru said: “I hold a bachelor’s degree in Social Work and Social Administration from Uganda Christian University. But while I worked in a couple of non-governmental organizations, I realized I did not have the thrill for office work. My interest was in doing stuff, that engaged my hands. But there were no opportunities I could find for women.”

Handy works are known to be a male thing. And that is the problem Letaru experienced, even though the calling for her to get into wood works was growing stronger. She visited several social media platforms, to see if she could find women involved in carpentry, which she did and drew inspiration.

Yet, here at home, she struggled to find a carpentry workshop that could induct her, and orient her in the trade. When she sought training, Letaru was looked down on or charged amounts she felt were out of her reach. On the other hand, she feels she was underestimated for her gender.

The impression she got, following interaction with individuals she sought an opportunity from, was that she was not strong enough to do such tough work, because it involved lifting heavy things and using hard metal equipment. Letaru was beginning to lose heart in pursuing her dream, when she got a blessing.

Her friend, Blessing Owomugisha, 28, introduced her to the Rotary Fellowship for Empowering Women, which at the time offered free training in carpentry.

This turned out to be a real break for Letaru, as she was now living her dream. After a year, Letaru has realized a few milestones, which include fine art out of wood pieces from her own hands.

There has been a sense of fulfillment on Letaru’s part. However, there are still some stinkers. Letaru said that she feels that she is going places with carpentry, because of the thrill it gives her, after the things she makes. Her income from carpentry is yet to reach the level she wants it to be, though.

“Although I am getting opportunities to make for people their furniture, I am yet to get my own workshop and machinery. That is what I am aiming for,” Letaru said.

Letaru is using her social media platforms to build her carpentry profile, and she has never been more determined to beat the odds.

Such is the spirit the Rotary Roses have aimed to inculcate since the inception of the Rotary Fellowship for Empowering Women. According to Rotarian Susan Ssamula, “We want young women to be leaders. And this means adopting skills in male-dominated fields and succeeding in it.”

That said, Rotarian Helen Kawesa, the assistant director, Communication and Public Affairs at the Parliament of Uganda, added that empowered women, probably like Letaru is, have got to inspire. This helps change mindset, but also encourages many other women not to fear challenging men in the employment space.

In addition, this Rotary Roses women empowerment initiative has not only broken gender barriers. But it has also gone a distance in creating more resourceful young women. Ssamula feels young women are best suited to learn new things and completely adopting them.

Owomugisha, who is a lawyer by profession, feels that considering how Covid-19 has ravaged many people’s work, and most especially women, learning how to tailor has through the Empowering Women programme, is a big accomplishment on her part.

She has bought a tailoring machine, and used it to make several clothes, that she donates to deprived communities and families. Owomugisha told The Observer that she has not used her new tailoring empowerment for commercial purposes. But also for a noble cause of dressing those that lack.

As a Christian woman, Owomugisha is committed to the Bible scripture, whch says, “when I was naked, you clothed me.”

There is power is giving, and in service above self, as is the Rotary mantra. And the skilling extends to fashion, design and information technology (computer science) among others. Ssamula said that more opportunities lie in wait for women interested in empowerment.