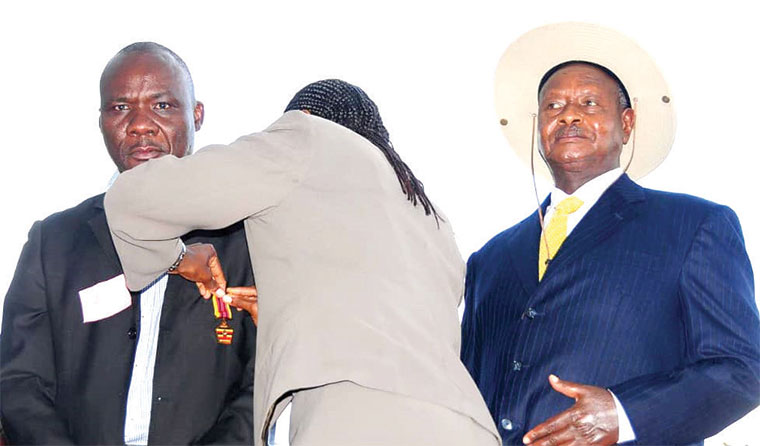 Those who know The Observer’s Hassan Badru Zziwa, 57, describe him as a moving encyclopedia of sports. The man will name and describe each player who was part of the Uganda football team that toured the UK in 1956, when they were born and when they died.

It is one of his more hilarious stories – how the team was losing to the hosts, until they removed their boots to play barefoot and started scoring!  Those who have not met HBZ, as we call him at the office, think he has been around since the 1950s. Well, Quick Talk caught up with him at The Observer, where he is also the operations director.

Hello HBZ, tell me about yourself…

I went to Kiteete Umea primary school for primary and Kololo high school for secondary. Originally it was supposed to be Kibuli secondary school but I was one mark short of the pass mark and I missed out on joining the school my father wanted.

How many are you in your family?

We are 23 children, but we had other children at home. Between my father and mother, we are 10 and I’m the fifth child. But among my father’s children, I’m the 10th.

You earlier said you didn’t perform very well, what do you mean?

I got 209 marks, yet Kibuli wanted 210, which was the first grade, then. All my brothers went to either Kibuli or Gombe SS. So, when I missed the point, he wanted me to repeat and I refused. One of my brothers supported me, saying he would take over paying my fees. But in S3 that brother died and that’s where the problems started from.

What kind of problems?

I started struggling for my own fees, which affected my grades. I still wanted to go to Kibuli for A-level but failed.

What did you do then?

I started selling merchandize on the streets in order to get money to go for HSC. I went to Kampala high school, but I was only able to pay for S5 then dropped out. A friend told me to go for a course in business management, but by then I had two children. I had got one in Senior Four and the other in Senior Five [eh, boss….!] You know those days we didn’t have these things of protection.

I hear you. Were the children from the same mother?

No, no, from different women. The first one when I went to the village for holiday, my mother said, ‘banange, baleete omwana [someone bring that child]’. I then asked her, whose kid she was talking about and she said, ‘This is your son. That girl in the neighborhood is the mother’.

I told her I was with her only once and she said, ‘hmm, look at him’ [HBZ’s children have a strong resemblance to him]. So, with the children now in the picture, money became even a bigger problem.

Was that the end of school?

In 1989, my brother told me about a course in photojournalism that had been advertised by the ministry of Information and Broadcasting. They had a school at Radio Uganda [now UBC] called School of Media and Graphic Arts.  At the time, I was already an ardent supporter of KCC FC; so, my brother said I could start contributing to a magazine called Soccer World. He was working with the Weekly Topic newspaper and was getting money to pay for my course.

Because of my support for KCC FC, which [Spear Group of Companies CEO] Gordon Wavamunno was also supporting, he said he was going to pay for the course [the two remain good friends to-date]. After that course, I did not continue for a diploma being offered at Uganda Management Institute. Maybe I would have continued had my brother, Siraje Zziwa, not died in 1992.

How is his death connected to anything?

At 31 years, he already had nine children and in his will he said Badru Zziwa should look after my children and that I should not refer to myself as a guardian. He was the closest to me. So, I stopped everything and looked for money to look after these children. At that time, I also had four of my own. I also had three other children of my other brother [a father-of-16 at 29!]

What did you do then to get the money?

Weekly Topic gave me my late brother’s job of staff photographer. But that year in July, Wafula Oguttu, Charles Onyango Obbo and Kevin Ogen Aliro left to start The Monitor [now Daily Monitor]. But I had a personal attachment to Jaberi Bidandi Ssali [who co-owned Weekly Topic], who said me of all people shouldn’t join The Monitor. But later I would also cross over to The Monitor.  I worked there until December 2003 and joined the group of journalists that started The Observer.

What was your salary at The Monitor?

Going back a little bit, how come your father, who refused to pay your school fees, chose you as his heir?

My father didn’t choose me; my siblings did. I used to visit my siblings a lot; so, they thought I was more approachable. My father hadn’t left a will [he died in 2004], yet he used to write a lot. Unanimously, I was chosen as the heir.

Your combined 16 children… were you able to dispense that role?

I tried, but many refused to study; but some of them were able to get at least diplomas.

When did you marry?

By 1995, I had five children and told myself before I marry or build a house, I want to first look after my children and see them through school. I also vowed I would only sire other children once my youngest daughter reached S6.

So, from 1997 to 2007, I didn’t have any other children. I started seeing somebody who was also my friend. She already had two children and didn’t want any more. I was comfortable with that; so, after she returned from the UK, we married in 2011 and have one child.

Sauda Babirye; she is a former national netballer.

How old is your eldest child?

Many people think you are such an old man because of your deep knowledge about sports.

I started enjoying sports way back and also had close relationships with people who knew a lot about sports. Rashid Mudini [former Sports editor at The Monitor and a former national footballer – he perished in a motor accident in 1998, with his colleague Richard Tebere] used to read a lot about sports. He was a reference for everything sports.

I used to envy him a lot. I started reading a lot to be like him. When he died, I said I wanted to replace him. I started reading all the books about sport. I started following sports and covering games. So, when people ask me about things, I know them [if you wake HBZ from sleep and ask him a random question about sports, he will have a definitive answer, complete with years, names and scores].

What do you think of the current crop of sports journalists?

Majority are lazy; they don’t want to read. But for me, I record everything in my laptop for easy reference. Even if I overhear someone sharing someone’s phone number, I also record it. Once I start calling someone, I automatically store that number in my head. Should I lose my phone, I can easily replace more than 40 numbers off the cuff [isn’t that a gift, boss?] but surprisingly, I can’t memorize car number plates.

On radio and TV [he features on sports programs], what kind of information do people want to hear from you?

Majority of our listeners are young people and because there are no books about our local sports, they are interested in stories from the 1970s, 80s, and 90s. That’s why when you listen to radio, most of the sports they cover is foreign, because for it, it’s a click away whereas for local sports, there is no literature.

But there is you! How do you spend your time away from the sports?

I don’t compromise my time for the gym, aerobics and sauna. Before Covid-19, I also used to go for Afrigo band every weekend. It’s the only band I enjoy. I used to also go to the theatre, but I stopped being regular because it’s also declining.

Is there anyone in sports you currently look up to?

Some people are good; the only problem is, they have no historical knowledge of sports. They start knowing from when they started following it. If they could go back and read, they would really be good.

Which sports journalist can you point out and say, this person is really good?

What is the one thing you can’t do without?

My laptop, because whenever I see something new, I write it down. I really love that laptop.

Have you backed up these things somewhere in case anything happens to that laptop?

Being old-school, somethings are very new to me. I have tried to engage some young people to help me. For example, someone is helping me manage my Twitter account, which I joined in July this year. I now have 1,300 followers.

If you ever leave the media, what will you do?

Write books; we still have a lot of gaps in that field. I talked to Mr Wavamunno and he said he was ready to print them.

When was the first time you flew out of the country?

It was 1988 when I was going to Zimbabwe but along the way, I have travelled to a couple of countries.

I threw up, because of my phobia for heights; I even felt like I was losing my ears. But that happens when I’m in a small aircraft. With big planes, it is always fine.