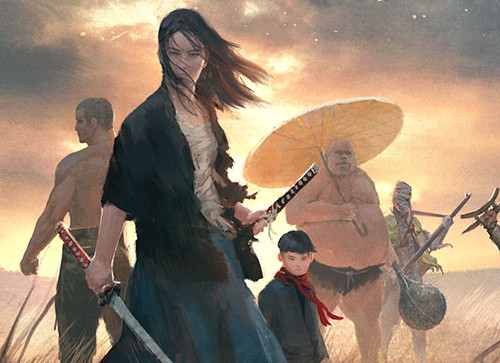 I chose to read Never Die by Rob J. Hayes, because I wanted something different. After months of sequels, I wanted to dip my toes into the works of a brand-new author.

Never Die had one of the most enthralling covers I had ever seen. I bought it for that reason alone and did not regret it.

I don’t know how to categorize the novel; I suppose ‘anime-inspired historical fiction’ works. The novel is set in the time of the Samurai. A warrior known only as Whispering Blade is on a mission of great importance.

But despite her incredible skill, things take a turn for the worst. When she regains consciousness, Cho (Whispering Blade) learns that she has been charged with a vital mission.

The Immortal Emperor of Hosa has grown too strong. The god of death has given Ein, an eight-year-old boy, the impossible task of taking the monarch’s head. But Ein cannot achieve this objective alone.

The boy needs warriors, legends like The Century Blade, Iron Gut Chen, and Flaming Fist that died in battle but who Ein can revive with the gifts granted to him by the Shinigami.

Ein’s offer is simple. Cho must lead this dysfunctional band of misfits into the heart of Hosa to complete an assignment that only the half-dead can execute. If they succeed, Ein will grant them a second chance at life. If they fail, the boy will send them back to the grave.

Three things make Never Die a must-read. First of all, the novel is quite short. You could finish it in a few days if you wanted to. So even if it is not your cup of tea, it won’t consume much of your time.

Secondly, the story is incredibly fast-paced. Rob J. Hayes avoids all the detours that normally burden other novels of this ilk. Many of his peers would use a setting like Hosa to explain the culture of the region, the traditions of the people, the rationale behind every nod, the texture of the food, and so on.

They would turn an action-packed adventure into a long lecture on life in historical Asia. Through the conversations between his characters, and the brief observations that Cho makes, Hayes tells you just enough to paint a clear picture of Hosa in your head.

He gives us only those bits of information we need to know to understand where the characters are going, why they need to go there, and why things have gone wrong. Hayes fights the temptation to annoy his readers with pointless exposition that doesn’t serve the story. As such, Never Die does not have a single slow moment. The story sprints from start to finish.

Thirdly, the concept behind the plot is far more intriguing than the synopsis suggests. Ein’s goal is to find legendary warriors that can aid him in his quest. He doesn’t care where their morality lies, whether they fought for good or evil during their time.

This places Cho, the primary protagonist, in a unique position because she has to keep the peace between egotistical individuals that can barely tolerate each other.

These components wouldn’t have worked if the author’s writing style was not simple and engaging. His sentences encourage the reader’s eye to flow seamlessly from line to line.

I do not doubt that some people will reject the novel specifically because it refuses to delve into pointless details. But I liked it. It was such a fun read, and I cannot wait to consume more of the author’s work.