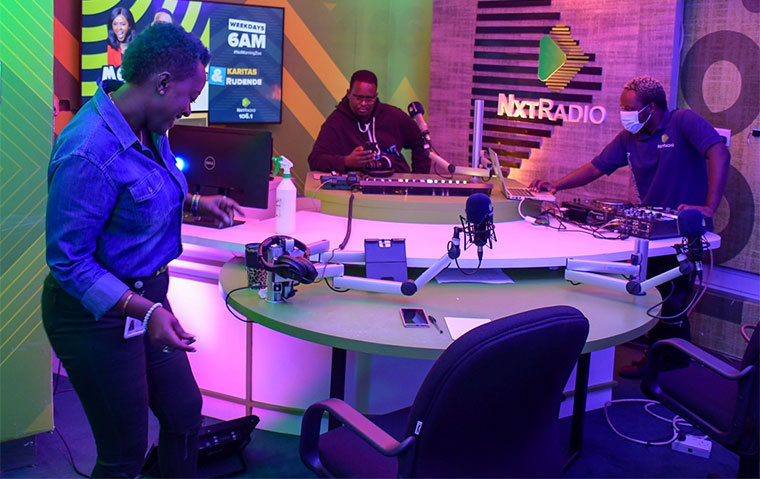 Next Media’s NxT radio has been launched onto the DStv platform. During an event held at the Next media’s headquarters in Naguru, it was announced that lovers of NxT radio will not only have to listen to their favourite presenters on 106.1 FM, but will also be able to watch them live on DStv channel 898 while in studio.

Marcus Kwikiriza, the general manager of NxT radio noted that this is a big achievement for them; to be the first audio/visual radio from Uganda on the DStv platform.

The whole set up will provide radio lovers with a new experience. From just listening, to watching videos of the music being played, while also capturing the actions of their presenters before and during the music interludes.

Joan Semanda Kizza, the public relations and communications manager of Multichoice, the induction of NxT radio onto the DStv bouquet, is proof of the great strides in terms of growth, that the FM station has realized.

“Clearly, NxT radio has a big listenership, and that undeniably makes them a good partner to a brand like DStv. We are convinced that this is going to be a successful union for many years ahead,” Kizza said.

NxT radio will be marking three years in October. But for the time of its existence, it has represented the trend of your modern-day radio listener. The urban youth, who are among its most dominant patrons, have reportedly moved away from the times, when radio was all about listening to a voice, that created a high sense of imagination.

The audio technology supported listenership to a restricted radius. It propelled NxT radio to a certain degree, as far as its reach and fan-base was concerned. Yet, with the visual support that DStv is providing, it means that whoever has a DStv decoder in their home, in any part of Uganda, right from the lowest bouquet called Access, they will be able to catch NxT radio, who are all about turning up the “vibe” as their catch-word and slogan goes, in every Ugandan corner.