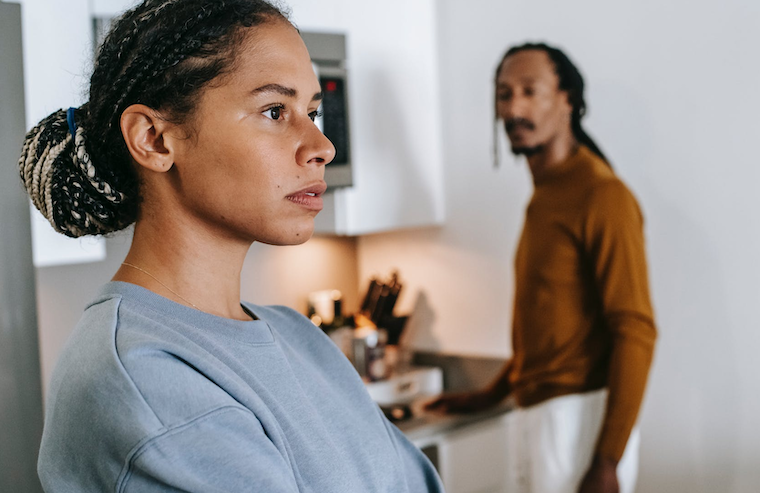 Diane was not at home when I arrived, but the children excitedly ran to hug me as soon as I walked through the front door.

They were filling me in on what their week had been like when Diane arrived, and I immediately blocked out their cheerful chatter and focused on her. She seemed nervous and only glanced at me briefly with a quick nod, before busying herself with the children.

“Stacy, did you finish your breakfast?” “Daniel, I hope you haven’t spent all morning on that PlayStation!” “Samantha, how many times must I tell you not to jump on the chairs?”

Her bustling busyness was clearly an attempt to delay facing me, but I was determined not to be put off.

“Diane, could I talk to you upstairs for a minute?” I asked with forced politeness as I stood up and dismissed her shield: “Kids, go play outside for a while.”

She stiffened at my request, but quickly covered it up.

“Sure,” she agreed easily.

She ushered the children out, and then followed me upstairs. Alone in our room, I got straight to the point: “Someone poisoned Julie; you wouldn’t happen to know anything about that, would you?”

“So, that’s what the policeman was going on about! An officer came to the boutique this morning asking me about her, but wouldn’t say why; poison, huh? Looks like someone else got tired of her whoring ways,” she smirked.

“Someone like you? Did you poison her?” I demanded bluntly.

“Ha! Like I told the officer this morning, I’m a busy woman; I don’t have the time to go running around after your whore!”

“No one else would do this to her.”

“Are you sure about that? She’s sleeping with my husband; so, who’s to say there aren’t others? Besides, I’m a businesswoman and poison isn’t exactly one of the tools of my trade,” she scoffed sarcastically.

I had been so sure I would be able to see the truth in Diane’s eyes, but at that moment, I was more confused than ever. Her suggestion that Julie might be sleeping around was rubbish, but I had to admit that the rest of her argument was logical.

At my silence, she deduced that I was unsure of how to proceed, and quickly took advantage of it.

Although I had said I was returning to the boutique, I had no intention of doing so. David was on to me and his interrogation had been even more nerve-racking than the policeman’s that morning. I needed a drink.

I picked a small and little known bar on the outskirts of the city center where I was less likely to run into anyone I knew; after all, it was still early in the day and I did not want to come off as an alcoholic.

Thankfully it was practically empty when I arrived, apart from a party of four men at a corner table that were so engrossed in a loud argument over a football match. I walked straight to the counter and took a seat on one of the bar stools like I was a regular.

“Get me a double gin and tonic please,” I instructed the barman.

He raised his eyebrows at my order, but wisely did not make any smart remarks.

Two drinks later I was feeling slightly calmer, but still had no idea how to get out of this web I had woven that was now closing in on me.

The only person I could think of who I could discuss the situation with was Tracy; so, I ordered my third drink and called her.

“Hi Diane, I was just about to call you. I passed by the boutique and Lisa told me some policeman came by, and after talking to him, you left; is everything alright?”

“No, everything is far from alright; I need to talk to you.”

“Where are you?” she asked worriedly, and once I had given her directions to the bar, she said she was on her way.

Later that afternoon, Kenneth came back to check on me, and after going through my charts and the latest lab reports, declared that I had improved enough to be discharged the next day.

Thankfully the baby had survived any adverse effects of the poison, though with the delivery date so close, Kenneth advised that I take it easy.

“Thank you so much; you literally saved my life,” I thanked him earnestly.

“Don’t mention it; just doing my job,” he shrugged indifferently, and from his tone and cold stance, I sensed he was not quite as pleased as I was about my discharge news.

“Is there something wrong?” I asked cautiously.

He did not answer for a few seconds, but then with a sigh, finally did; “Not really; I’m just worried about you.”

“Why? I thought you just said all my charts were looking good.”

“And they are – health wise, you’re doing well, I’m just concerned about the rest. When you came in here, you told me David had poisoned you – and now suddenly you two are all lovey-dovey again, and if I’m not mistaken, once you’re discharged tomorrow, you’re going right back to him, right?”

So, that’s what it was! Kenneth was simply jealous.

“I told you that because that’s what I believed at the time; now I know he didn’t have anything to do with it, so yes, I am going back to him.”

“You’re so quick to believe he’s suddenly innocent, but you can’t tell who poisoned you if not him.”

“The police seem to think it was his wife.”

At that, I got angry; his jealousy I could put up with, but now he was pushing it too far, and I was ready to push back.

“That’s enough, Doctor Kenneth! Thank you for saving my life, but anything beyond the status of my health, is none of your business!”

His eyes narrowed and I could see his jawline move as he gritted his teeth, before he finally answered: “Noted.”
With a curt nod, he turned and left the room.