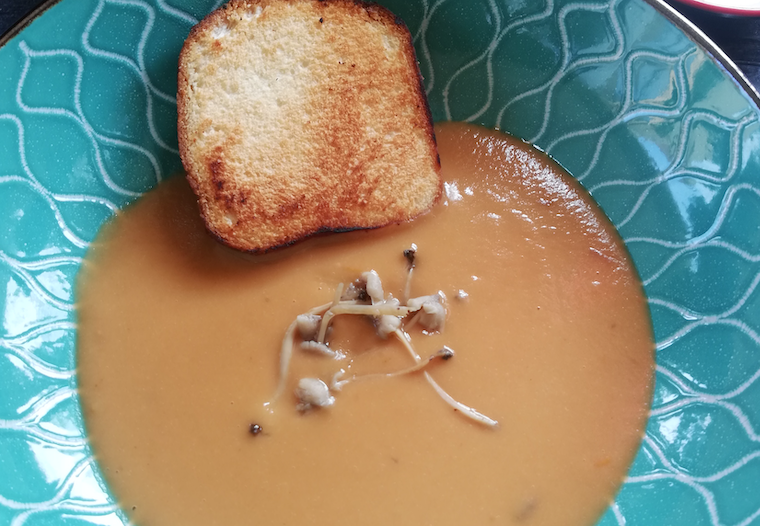 About three years ago, Eric Li, a Hong Kong national, came to Uganda to work with a solar company. When his contract ended, mix in the coronavirus pandemic and the subsequent lockdown around the world, Li stayed put.

After traversing the country with his friends, he discovered that nearly every region in Uganda has its own unique culinary style and food staple. This is similar to Asia, he says, but unlike there where you can get all this dining experience within the city, in Uganda, you literally have to drive to those locations to enjoy the variance of those meals.

Even more than architectural tourism, food tourism ranks extremely high on the bucket list of many a tourist. Little wonder former Tourism state minister Godfrey Kiwanda Ssuubi tried with the rolex street food promotion. He had the concept but it was not well executed.

‘A journey through Uganda’ as the nameless restaurant housed in a private home in Bukasa, Muyenga calls it, is a nine- course, Shs 150,000 tasting menu.

It is more about the enjoyable experience than sorting out your hunger demands. Even for a Ugandan, it is still mesmerizing to learn about the ideas and purpose behind the different traditional foods.

Maybe Uganda or Africa at that was not as backward as the colonialists would wrongly want you to believe. The food tasting journey takes about two hours and the portions are small - but cumulatively you will actually get full as you cap it all with the Sipi Falls Red Honey coffee (made from the coffee bean husks) or the Cascara tea.

The tasting starts with the welcoming chilled loose hibiscus tea served in a small glass mug – with Romeo charismatically doing the honours of introducing every upcoming meal. He is very good and it, and easily draws your interest and whets your taste beds even before you set sight on the food.

First up is the deep-fried, crunchy sweet potato chips and crispy chicken wings served with eshabwe sauce. Eshabwe, Romeo would tell you, is from the Banyankore in southwestern Uganda, made by mixing ghee with rock salt (ekisula) until it turns from yellow to white. It was/is reserved for high-profile guests at parties and traditional weddings.

Now, the eshabwe here is not the authentic eshabwe as we know it; here it is recreated with mayonnaise. But at the beginning of the tasting journey, a disclaimer is issued that the foods may taste slightly different from the known authentic tastes, because they have been recreated with Asian seasonings, curries, and cooking herbs.

Asked whether this actually in a way does not kill the intention of the traditional foods experience, Li says he may never come close to preparing the meals better than the natives themselves but also, the meals are forever evolving and should be able to reflect the chef’s own identity.

“Of course, the Ugandan natives prepare their meals better, all I can do is add my own interpretation and reflect the identity of Asia. If you really want the original tastes, you should actually go to the traditional chefs,” he says.

From eshabwe, it is a straight drive to eastern Uganda with the malewa salad. The air-dried and smoked bamboo shoots from Mt Elgon are served with chopped carrots, onions and mushrooms mixed in a rich peanut sauce. Malewa sauce was traditionally served by Bagisu mothers to their sons as part of a week-long passage to adulthood – capped up with circumcision.

It was my first time to taste malewa; I had previously been biased that they look and must taste like banana fibre, and the biases were not far off from the truth. The peanut sauce was a bit loose but the carrots and mushrooms added a natural vegetarian feel to it.

It is unbelievable that this soothing sauce is made from mashed beans whose skins have been peeled off and mixed with ghee.

Although traditionally served with potatoes or millet bread, on the day The Observer visited, it was served with mandazi (doughnuts). It was such a natural pairing. Firinda is so good it could pair with just about anything.

What is Ugandan food tasting without the rolex – omelette rolled in chapatti with tomatoes and cabbages? It would not be worth it, would it? After Uganda Waragi, the rolex is perhaps Uganda’s most original and unique export.

If you have travelled to neighbouring Kenya and Rwanda, whatever rolex Ugandans exported there, they retained the original recipes. The rolex deluxe here is too manipulated, rolled with lots of avocados and mustard, but the chapatti is truly original.

From the rolex, it was the matooke katogo - matooke fingers cooked together with tomato soup. This is usually food cooked in haste in the central region especially when one lacks what to cook. From katogo, we headed to West Nile for the angara, which is dried highly salty fish served with anyoya (maize and beans) and buttered cassava.

Angara fish is found only in the Albert Nile and is unique to the Alur-speaking people found in Nebbi, Zombo and Pakwach districts. It’s a special kind of fish served to Nyar Angara (child of Angara) or Wod Angara (son of Angara) as the children there are known to make them super intelligent.

It is also served on special occasions to visitors and elders as well as used to treat smallpox. Angara is extremely salty and tasty. They saved the best for last: the luwombo chicken pilau.

I’m a fan of the fish in groundnut paste luwombo, but not the chicken luwombo, as most times I find it too flat in taste and often wonder what the fuss is about.

But this one is worth every hype. From the aromatic steaming banana leaves to the boneless well-seasoned chicken and steamed rice, it was a delicious meal.

Next up was supposed to be the emolokony soup, whose originality is contested between the Acholi in northern and Itesot in eastern Uganda. This is long-boiled cow hoof served best with cassava.

It was not available though, and a mixture of malakwang vegetables were served in compensation. Li says they are working on a new menu and hope to move to a bigger restaurant because currently it is all housed in a private home. What a delectable journey, still!

-3 #1 Akao 2021-06-19 15:40
I wouldn't trust chinese with food! Chances are the food will be full of added chemicals to make certian taste and make people addicted to them, or make them get full faster!