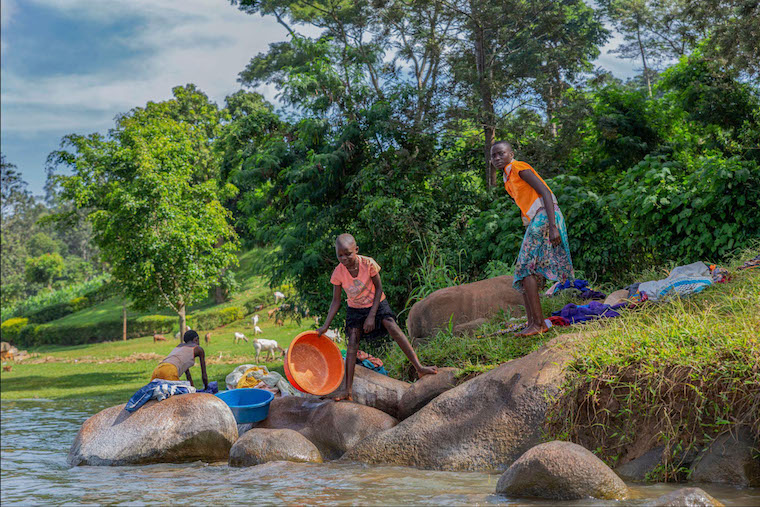 Girls doing laundry at the banks of R.Nile

To imagine those fun-loving, testosterone-packed young men that used to fling themselves into Bujagali falls to entertain tourists, now digging pit latrines for a living! Or hundreds of fishermen walking away from the only source of livelihood they have ever known. MIRIAM WATSEMBA visits Budondo village, home of Bujagali falls, to count the losses. And gains.

“The Nile is not of significant importance to people anymore,” says Hellen Awori, a 32-year-old, born and raised resident of Budondo village where Bujagali falls were once located.

According to Awori, after the construction of Bujagali dam started in 2007, River Nile stopped benefiting the residents in her locality.

“At first we thought it was going to bring us development, but it seems it even took away what we had before.”

Awori says the place, once world-known for white water rafting, is not as busy as it used to be.

“Some people in Budondo do not have the opportunity to even use that electricity.”

Bujagali falls was once a magnet of unending tourism and a source of livelihood to thousands of people living and working along the Nile; the new dam has left hundreds of locals unemployed and displaced.

Henry Kalulu, 43, says he was given Shs 2m by BEL (Bujagali Energy Limited) in 2003. He, however, had no idea how to start over and create a sustainable living for the rest of his life with just Shs 2m.

A former professional swimmer who used to entertain tourists at a fee by jumping into the roaring rapids, Kalulu has since resorted to digging pit latrines in Budondo village and heavy drinking to escape his sad reality.

The resettlement and compensation of affected people like Kalulu is said to have been done under the observation of Inter-Aid, which was appointed for the role by BEL in December 2007, after delays.

In a bid to increase electricity production and supply, Uganda is on to its fourth and fifth hydroelectricity dams, within a span of just 10 years. All these constructions will equal to disruption in the nature of three mighty natural waterfalls namely; Karuma located on the Kampala-Gulu highway in Kiryandongo district, Isimba falls near Kayunga town and Bujagali.

But none will possibly land a direct hit on locals like Bujagali. In a phone conversation with Dr Tom Okurut, the executive director of National Environment Management Authority (NEMA), he acknowledged that there are lessons that have been learned from the Bujagali dam construction.

“For the new projects, we have perfected the conditions. Arising from Bujagali, we are now doing Isimba and here we have created special conservation areas because we know, when flooding takes place, some of those things that disappeared could be conserved,” says Okurut.

The special conservation areas for Isimba are called Kalagala offset, and they have been gazetted as ‘no work zones’. People are not allowed to encroach on the area. This is to allow nature to take its course and provide an alternative site or compensation for all the nature that will be submerged after construction of the new dam.

Bujagali falls where construction of a dam started in 2007, and was submerged in 2012 when Bujagali hydropower plant was launched.

At a cost of $902m, the construction of Bujagali dam promised generation of 200 -250MW of hydropower, reduction in load shedding, and a decrease in the cost of electricity in the country. After construction, however, the dam could only produce 121MW of electricity, leaving many people in rural Uganda unable to afford this electricity as prices instead increased.

In fact, for many in Budondo, the only electricity they see is in the pylons ferrying it from their village to faraway lands.

END OF AN ERA

Fifteen years down the road, life has folded for the majority of locals in Bundodo whose livelihoods entirely depended on Bujagali falls and the tourists it drew.

The construction of the dam resulted into a backflow that, according to the locals, led to rapidly increasing water levels. Within 48 hours of completion of the dam, islands and properties including hotels and farm gardens more had been submerged.

The waterfall and rocks that surrounded it were now invisible, leaving behind a ‘manmade lake.”

Ben Kamya, 32, a resident of Budondo, is one of those who received no payment or support whatsoever. Having worked as a safety kayak expert on the Nile for more than 10 years, Kamya has now resorted to subsistence farming to feed his family.

Kamya says he is no longer concerned about the Nile, neither does he visit it anymore, despite the fact that his home is at a climbing distance of about 300 metres from the Nile.

Before the construction of the dam, Kamya worked at the Nile and took time to regularly slash bushes at the banks, remove the water hyacinth and ensure that the banks were clean.

For Eria Damba, 95, one of the oldest fishermen in Budondo and also the ‘gawunga wa bavubi’ meaning leader of the fishermen in Kyabirwa, Namizi and Luyala villages, the dam completely robbed the fishing community of over 400 fishermen that he leads. He says there is barely any fish left to catch, especially with the increased water levels and government restrictions on fishing in the river.

Henry Bazira, a researcher with the National Association of Professional Environmentalists, warned that the flooding will change all the characteristics of the water body here and it will disrupt the entire ecosystem.

In an interview with the BBC on April 27, 2007, he warned, “The micro-climate will change and we don’t know what the impact of that will be”.

“The fish did not just disappear, they were forced to migrate” says Damba. He believes that what modernity calls ‘bad methods of fishing’ is an escapism theory from the real cause of the decline in fish quantities in the water.

He says the water backflow and consequential flooding caused by dam construction led to contamination of the river water, killing the fish.

“The flooding was inevitable. But even the fish which disappeared have now come back,” Dr Okurut tells me when I mention the issue of fish reduction.

According to Damba, most of the land and other properties that were submerged by the new manmade lake, were filled with litter, harmful waste and plastics which had been a part of the main land for decades.

“There is no way the fish would survive that kind of pollution!” he adds with a tone of disappointment.

Damba believes ‘bad fishing methods’ contribute so little to the disappearance of fish in the waters of River Nile, and looks at their prohibition as an indirect oppression of the local people for sins committed by the rich.

He speaks of the days when fishermen took pride in cleaning up the river banks, slashing and general maintenance of the river which he says is now history, because the river is not for the community, but for foreigners.

“The rich men have bought off all the land surrounding the river now.”

Zachariah Mugabe, 40, the chairman of the landing site that used to be the welcome place from where people viewed the magnificence of the waterfalls, says, “We have no landing site now, as you can see.” He points far off at the stretch of water, narrating how all that used to be a working place for fishermen, merchandise and food vendors, tour guides, restaurant owners, hundreds of employees including porters and security guards.

Ali Buyende, 26, the manager of Expert River Tubing and an expert in eco-tourism, believes tourism will never be the same in Bujagali.

“At any given time of day, there would be hundreds of people down there visiting the falls, especially bazungu [whites]” says Buyende, which is no longer the case. “If we walked down there now, we would find one or two people, smoking and killing time.”

There has been total disruption and reduction in tourism activities such as rafting, kayaking, boat rides, water gymnastics and entertainment on one hand, and on the other, activities such as birding, Bujagali shrine, community walks and fishing adventures.

Okurut says the water rafting was moved further downstream to Itanda falls. However, Buyende insists the tourism industry has tried to recover by exploring new spots on the Nile, especially those ahead of the dam, but it can never match the thrill and attraction of Bujagali.

This has forced them to cut the prices for some of their activities such as water rafting, tubing and boat cruises.

Mulongo Alamanzani Wasswa, a fisherman on the Nile, says he used to make extra income from fishing with tourists, but the business was greatly affected.

The tourism momentum was further affected by Covid-19 and the 2020 lockdown in Uganda. However, out of this, the industry has experienced a rise in local tourism, with Jinja becoming a prime destination for Ugandans from Kampala. This has forced tour experts and business owners to find alternative tourism activities on the Nile.

Paul Wesina, 27, the founder of WEMA (Waste and Environment Management Association) in Budondo, says the entire ecosystem of both nature and tourism was altered. He says tampering with the river’s natural flow submerged a lot of forest cover, causing forced bird migration and this has had effects on birding, which was a huge part of the activities at Bujagali.

“All environmental work is risky. You need to identify the risk and you mitigate. And that is what we did. We carried out an analysis, which means we okayed the mitigating propositions of the contractor and they also agreed to our propositions,” says Okurut.

In February 2005, the Ugandan Government announced it would go ahead with the project despite its problems and drawbacks. Construction was launched in June 2007 through a public-private partnership with Uganda Electricity Transmission Company Limited (UETCL) and BEL.

BEL is a special-purpose company set up by affiliates of the Aga Khan Fund for Economic Development and Sithe Global Power.