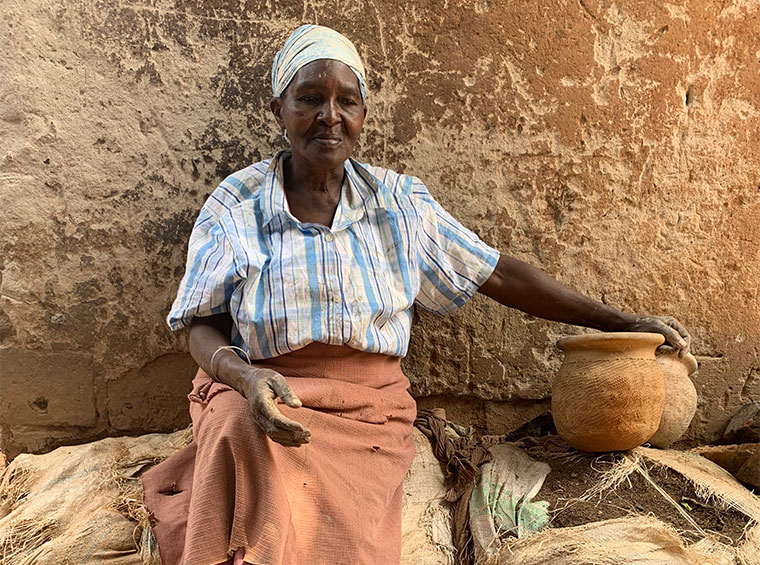 In Uganda, affluence once upon a time was not about which car one drove or how much money was in the bank; it was about how respectable and ‘solid’ one’s home was.

Depending on which part of Uganda one came from, some things were a sure-fire way of telling a good home from a scattered one. Gardens, cattle, grinding stones and granaries were some must-haves.

In Buganda sub-region, the picture of affluence came in form of a house well-fenced with a green hedge that in December doubled as a Christmas tree source; that home had coffee and banana plantations, a huge clay water drum outside (ettogero), a well-stocked kitchen with a mortar (ekinu), pots for everything from fetching water, to cooking, storing drinking water, etc, as well as an organised ledge (ekibanyi) above the fireplace, where firewood was stored for the rainy season, and bananas, mushrooms and smoked meat were kept for preservation.

For the mother in that home, the bedroom always had a corner where she kept a pot shard (olujjo) and an assortment of herbal mounds of clay (emmumbwa) – her go-to in case of any illness. She would put a little water on the shard and grind the mumbwa into the water to form a medicinal solution that mostly worked.

I asked eight random Ugandans with spouses and children, how things would pan out if they were asked to spontaneously produce any of the above-mentioned items, or get shot. All but two admitted they would be dead, alright. Lillian Atim was the only one who still had cooking pots, drinking water pots, a wooden mortar and pestle, and a grinding stone. She also cooks using firewood and a traditional fireplace.

Elsie Nakirya has a wooden mortar and pestle. The others just laughed at the ‘impossibility’ of finding any of those items in their homes. Married to a Muganda and staying in an affluent Kampala suburb, I was impressed when Atim said she has taught all her children how to cook using both traditional and modern tools; they even grind their grain on a lubengo, as the grinding stone is called in Luganda.

Atim’s daughter, Joyce Muwanguzi, is in her early 20s and a manager in the corporate world. When I asked her if she could indeed ‘operate’ a grinding stone, she enthusiastically and quite proudly answered: “Oh yes!” Many of her contemporaries would not positively identify a grinding stone even if their lives depended on it.

Atim, who hails from Purongo in Nwoya district, said there are hills where nature has provided grinding stones of all shapes and sizes, and all the locals have to do is go and choose a lubengo that meets their tastes and needs.

“In Gulu, there is a hill called Got Laroo, where locals pick stones for both building and for use as grinding stones,” Atim said in a recent interview. “The other one is found in Pakwach, called Nyarabur.”

Now, anyone who has eaten a millet meal prepared from scratch using a grinding stone testifies that it tastes much better than the industrially-milled grain we buy elsewhere. Just like Atim, Nakirya does not eat any groundnut paste where the groundnuts were not pounded using a rudimentary wooden mortar and pestle.

Considering that she does not eat meat, the sound of pounding is a common and lone one coming from her Makerere compound, almost daily. Even when the maid, tired of pounding groundnuts everyday, cuts corners and buys groundnut powder from a mill, Nakirya can tell straight away that her mortar was not used.

However, she too can no longer trace her lujjo – not that she plans to use emmumbwa any time soon!

“Those things used to really work, but today all the wetlands are polluted and encroached upon. Where would one find clean clay to hold the medicinal herbs anymore?” she wondered.

Nakirya reminisced how in her childhood, compounds had broken pot shards everywhere – so much so that it was a common pastime for youth to walk around collecting the broken pieces to take to Busega-Kibumbiro to sell to the potters there.

Today, the youth walk around looking for metal scraps, instead. How times change!

In fact, if you want to know how much time has changed, go to Kibumbiro in Busega. Deriving its name from the once-predominant vocation of the residents, Kibumbiro can be easily accessed through Lungujja, Lugala or Nateete.

Before setting off, I figured, surely a potter’s yard can be recognised from afar. I imagined huge heaps of clay, pottery wheels and a flurry of activity. But after driving in circles for several minutes through what can only be described as a slum with no clay yards or open spaces in sight, we asked a resident to guide us to a potter’s house.

Abandoning the car to walk through the alleys and at a fee of Shs 5,000, the resident led The Observer to 62-year-old Nnalongo Christine Nabigese’s home. Between her tiny house, a pit latrine and her neighbours’ equally small houses, she was stomping on mounds of clay with the help of her son. Three pots were lying around, but other than that, the sight was a far cry from what I had in mind.

Nnalongo, who has been a potter for 30 years now, decries how much the area and her trade have changed. Kibumbiro was known for its abundance of clay, but government years ago took over their clay field (ekirombe) to construct a road, and that was the beginning of the end.

From an entire neighbourhood of potters occupying all the way to the main road, today Kibumbiro is a cluster of poorly-planned homesteads crowded together. Only six potters remain scattered throughout the ghetto.

According to Nnalongo, who moved to Kibumbiro to marry her late husband – a potter – the rest have since died, moved away and sold their land or joined other trades because the pottery business had become expensive and less in-demand.

“Sometimes we send for clay and the truckers come back and say they had to look further (hence more pay), because the previous site was sold off or under construction.”

Clay aside, Nnalongo’s vocation is in trouble due to modernity. Drinking water pots have been replaced by refrigerators and for every clay item there is now a tool from China and the West.

“It is now rare for someone to come and buy a pot from me. I sell wholesale to people who distribute them in markets.”

The mother-of-three said occasionally someone will come and order for the big water tank (ettogero) to collect rainwater, an indication that some people do miss the good old days, where everything was organic and life was so simple. What Nnalongo makes in plenty are ensumbi (long-necked pot) favoured by witchdoctors, as well as bowls that young women buy a lot to burn incense.

Not a Buganda affair only

Esther Nalumansi, 40, is from Busoga and has many memories of pots and their uses. Take the time they played hide and seek as children, and two of them climbed into ettogero to hide, only for it to split open as they rushed to climb out, to the chagrin of their mother.

Or the many Christmases when a piece off a broken pot would be heated on a flame then used as a hot comb for the women to look spick and span before church. Busoga and areas further to the East of the country were also in love with granaries, a once common sight in every compound.

“Thieves now dig up cemented houses, and you talk about granaries? Granaries stopped making sense because of rampant theft. You wake up and all your grain was stolen in the night,” she said. “Like in Buganda, now many areas of Busoga and beyond have adopted having storerooms inside the house.”

A few years ago I visited a boma in Karamoja, and the girls invited me into their manyatta. I cannot forget how I painfully walked into bunches of sorghum suspended from the roof in the middle of the pitch-black manyatta!

Simon Musasizi from Cross-Cultural Foundation of Uganda acknowledges that there is a lot of culture to preserve in Uganda, and museums could help in that area. He said the Bakonzo, for example, are losing many of their heritage sites to floods as a result of climate change.

Igongo Cultural Centre in Mbarara has tried to preserve much of Western Uganda’s culture and traditions through a museum, but other regions have not been as lucky. Colonization by the British, who ironically treasure their heritage, left Ugandans thinking civilization meant dropping all their cultures and identity for foreign ones.

Musasizi said it is important for parents to make it a personal, intentional goal to educate their children about their culture, no matter how modern your lifestyle may be. Using literature, storytelling and choosing what art forms children are exposed to, Musasizi believes there is a generation to salvage.

“Of course culture is dynamic; it changes, but there are things we should not lose, like grinding stones, ekinu…,” Musasizi said.

One of my childhood joys and memories was participating in making banana juice (omubisi). Even though my single role was to go out and gather the particular grass my brother would mix with bananas to make the juice, I enjoyed it immensely because of the anticipation of a cold glass of banana juice at the end of the process.

Times have changed; not only is that grass near-impossible to find in Kampala today, the bananas (kayinja, musa or kisubi) are not common either. Few millennials have tasted mugoyo (mashed sweet potato with beans) kafeche (goat offal boiled with goat blood). For the latter, it is actually an abomination for Muslims and born-again Christians to eat blood that way.

Still, how I miss the simple life; when the most complicated thing in the village was the way that ddobi swung his open charcoal flat iron in complete circles, to make the coals glow! All that without dropping a single coal.

I last saw a dobi in 2005 in Bunamwaya. If there is still one in your area, treat him with respect.