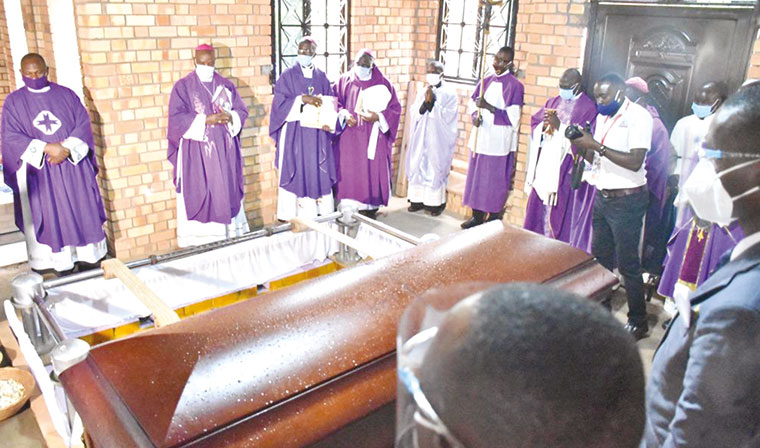 When the church announced on January 21, that Bishop John Baptist Kaggwa, the emeritus ordinary of Masaka, would be buried at Bukalasa seminary, many wondered why; the norms of the Catholic Church dictate that a bishop is buried in his cathedral.

Since two of Kaggwa’s predecessors – Henri Streicher (commonly known as Stenseera) and Adrian Kivumbi Ddungu – were buried in Villa Maria cathedral, there was a general thinking that he too would be buried in the same church due to its significance in the history of Catholicism in Uganda.

The issue came up again last Sunday (January 31) as Christians celebrated mass a week after Kaggwa’s burial, but the diocesan chancellor, Rev Fr Edward Ssekabanja, said Villa Maria may not accommodate more bishops’ graves, given the growth in the number of Christians that use the church and being that Bishop Kaggwa had retired.

He could be buried anywhere as per his will. The bishop emeritus succumbed to Covid-19 at Mulago hospital last month. Kaggwa willed to be buried in the mausoleum at Bukalasa minor seminary for the Masaka diocesan priests. The cemetery chapel (Chapel of Committo) was built in 1914 on the directives of Bishop Streitcher.

A year later, Bishop Anthony Guillermain’s body became the first to be buried in the mausoleum on March 9, 1915.  Since then, it had not attracted much attention until August 2015, upon the death of the former bishop of Fort Portal diocese, Paul Kalanda.

After Kalanda’s death, the former bishop of Moroto diocese, Henry Ssentongo, wrote to Kaggwa requesting that he too be buried at the same place, when he died. This was just another request from prelates hailing from the diocese, who had written to Kaggwa as the ordinary of Masaka diocese at the time, expressing their wish to be buried in their mother diocese.

Being the pioneer diocese in Uganda, where the first priestly formation institutions were established, Masaka boasts of a number of bishops and priests, who were deployed both within and outside Uganda, many of whom want to be buried back home.

“As a diocese, we resolved that that should be the burial place for all bishops of Masaka and other bishops from outside the diocese that wish to be buried in Masaka,” Fr Ssekabanja said.

This prompted Kaggwa to cause for the expansion of the mausoleum built like an actual chapel, and with support from the Friends of Bishops Association – a group of Catholic businessmen led by Emmanuel Katongole – Kaggwa had the chapel expanded to double its capacity from eight to 16 pre-constructed graves.

“The graves are already dug. If anyone is to be buried there, like it was for Bishop Kaggwa, we just remove the slab, bury and seal the grave,” said Rev Fr Henry Ssebwana, the vice rector of Bukalasa minor seminary.

Kaggwa became the fourth bishop to be buried in the chapel, in line with the diocese’s plan to bury its bishops at Bukalasa.  In fast-tracking the renovation, no one imagined that within two years, the main architect’s remains would be interred there!

In fast-tracking the renovations, Kaggwa’s mind was reportedly on much older clerics from the diocese, for whom he wished to prepare a dignified, Catholic interment. But alas! The Lord he served had other plans.

Many Catholics actually don’t know that the chapel has existed for more than a century. What is more visible is the well-tended cemetery outside the mausoleum, with a message at its entrance that reads: Memento Mori, Latin for ‘Remember you must die.’

“That chapel is like Bishop Kaggwa’s own church, because he renovated it himself to prepare a resting place for himself and those to come after him,” Fr Ssekabanja said.

Since the graves are not raised, each is identified with a plaque with the particulars of whose remains lay underneath.

By the time Kaggwa retired as bishop of Masaka, more than Shs 200m had been spent on the renovations before works stalled after the resource envelope ran dry.