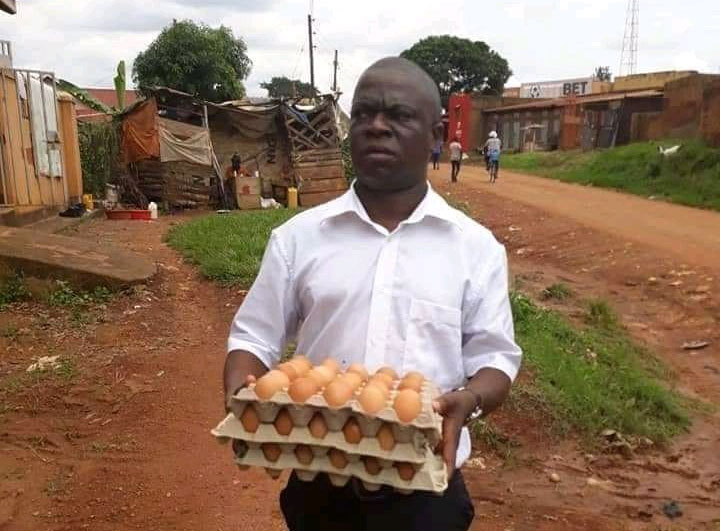 MUHAMMAD SSEGIRINYA, 33, is the newly elected member of parliament for Kawempe North. He has been labeled a comedian for his approach to politics, but he surprised many when he got a landslide victory to enter the august house.

Quick Talk held a telephone interview with him about his new position and more. Done entirely in Luganda with a sputtering of English here and there, the interview was done signature-Ssegirinya style.

Congratulations on winning the MP seat!

Thank you so much. I am really thrilled. Securing the win was not that easy, but because people considered my previous activities during the struggle, I managed to get a landslide victory.

We were 11 candidates in the race including the incumbent Latif Ssebaggala, former Kampala deputy mayor Sulaiman Kidandala and others. But I beat them hands down with a very big margin…I took up the positions from number one up to ten and the second person in the race picked up from there.

Hahahaa… What are you doing to celebrate your win?

I have not yet thrown a party, because how can I celebrate when the presidency was robbed from us? I am still waiting for Robert Kyagulanyi [former presidential candidate, alias Bobi Wine] to retain his rightful position as the president so that we make a joint victory party.

Eh? Good luck! What helped you win against seasoned politicians?

I have really been there for the people. I am a man of very many words, but with actions as well [most memorably, Ssegirinya protested the introduction of mandatory pay TV by carrying his TV set to parliament. That didn’t end well. And
at the height of the age limit debate – well, fight, really – in parliament, he was locked outside parliament as he begged to be let in to join the now-infamous brawl.]

During the lockdown period, I distributed food to my people who were no longer working. I have also been doing a lot of charity work. I have been doing political activism, which the people who stood against me were not doing.

Now that you won, what do you want to tell them?

All I can tell them is that let us work together. Even though I won, I do not want it to be a song. I want us to work together for the good of Kawempe North.

I have already come up with ‘100 days of Muhammad Ssegirinya’. I am first going to come up with a private member’s bill of decreasing the salary of MPs to Shs 5m, because it is not fair for an MP to get Shs 25m yet teachers and doctors get peanuts [oh, Quick Talk and other disgusted Ugandans will hold you to that, honourable!]

I also want the people in diaspora to be represented in parliament, because they are a big population out there and they go through a lot of problems while abroad which need someone to address in parliament. There are very many things I am going to address and, therefore, I am going to be raising my hand all the time because I have come while I am on fire.

I guess you will be giving us live updates then, “Mr Update”…

Very much so; in fact, I am just going to intensify my live updates. And my fellow MPs should watch out because any MP who will talk nonsense, I will record them and expose them to their constituents. I have gone to parliament for two things: representation and to expose MPs who do not represent the views of the people who have sent them.

They are going to give you Shs 321m to buy a car. I imagine you cannot wait to get your hands on it!

I am definitely going to take that money but I am not going to buy a new car because I already have one. I am going to get that money and divide it proportionately to help my people.

I am going to get Shs 100m and help the families of our people who lost their loved ones during the struggle, like Rita Nabukenya, Yasin Kawuma, Dan Kyeyune and many others.

I am also going to put 50 million into Muhammad Ssegirinya Orphanage to help underprivileged children, and then invest some money in development groups in Kawempe North, especially for the women, and then I will use the rest of the money to buy sanitary pads for young girls and also buy hospital beds for premature babies at Kawempe hospital.

But Honorable, you really do not need a new car?

No, my old car is enough for me to move through my constituency as long as I fuel it. Kawempe is not a mountainous area that I need a big car to traverse it. I do not want to lose the personal touch with my voters due to fear to approach me because I am in a monster ride. I am going to remain with my Toyota Premio.

Oo..kay! What was the most difficult part of the campaigns?

The police disturbed me a lot using the excuse of Covid-19 yet my opponents would campaign freely while being escorted by the same police. Very many of my posters were also vandalised.

Another thing that frustrated me was refusing my presidential candidate Bobi Wine from coming to campaign for me because had he come, I think I would have broken the record as the MP with the highest number of votes in this general election [Shamim Malende possibly comfortably holds that with more than 314,000 votes for Kampala Woman MP on the NUP ticket].

You were once in FDC why did you cross to NUP?

Politics is dynamic; you have to go with the flow. I thank Dr Besigye because he is one of the people who mentored me and gave me the determination and courage to be in politics.

But time came and there was a new person on the political scene called Robert Kyagulanyi Ssentamu, my fellow youth; there was no way I could not join him.

Where were you born, Honourable?

I was born in Butale Kaddugala in Masaka, and it is where I even started my education from.

How then do you come to Kampala?

I came on a lorry loaded with matoke and alighted at Bwaise, from where I started a new life. It is such difficult conditions that molded me into the person I am today.

How did you get through school and even qualify to be an MP?

I sat for my PLE at Kaddugala primary school, then joined Kaduggala SS for S1 to S3. Unfortunately, the business I used to do of selling sugarcane collapsed then and that is when I decided to come to Kampala with the help of a cousin who used to trade in matoke.

He helped me get a bursary at Kimbassy SS in Kyebando where I sat for my O and A-level. After A-level while still thinking about my next step, I started calling into different radio political talk shows, where I became prominent as ‘Ssegirinya, eddoboozi ly’e Kyebando’ [Ssegirinya, the voice of Kyebando].

In 2011, I contested for MP Kawempe North, but lost to Latif Ssebaggala. In 2016, FDC denied me the party ticket for the post of lord councilor, but I came as an independent and won. I used my tenure as a lord councilor at KCCA very well and it laid the ground for me to become an MP.

Yes, I am married with kids. But since in Buganda culture men do not count their children, I won’t tell you how many, but on the swearing-in day, everyone will see them [he has previously said his suit and shoes for that day have already been set aside].

How long do you plan to stay in parliament?

I want only two terms. When they expire, I will either retire or move on to another leadership position. It is bad for a person to stay long in one position of power because you hinder other good people from serving the people.

Fair enough. Now, imagine you were president for just a day; what would you do?

What should the people of Kawempe North expect from you?

I just want to tell them that they are not going to regret. First of all, everyone’s focus is on me to see whether the people of Kawempe North made the right decision in voting for Ssegirinya and that is a question I am going to answer with actions. My people should just wait for my actions.