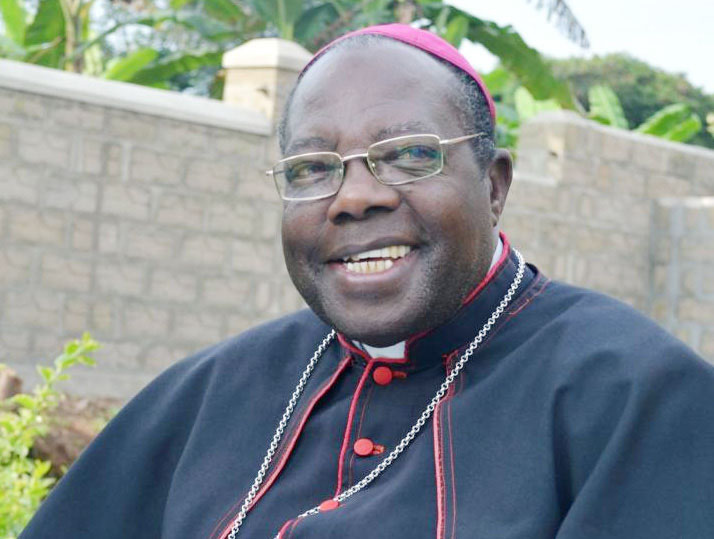 As the sun went down on January 20, news spread of the passing of Rt Rev JOHN BAPTIST KAGGWA, the bishop emeritus of Masaka. He was 77 years old.

He is best known for his being an eminent church leader and an outspoken advocate for justice and human rights; he had a soft spot for those in need, writes Sadab Kitatta Kaaya.

The softspoken prelate had lost his month-long battle with Covid-19. He was rushed to Mulago national referral hospital on December 17, 2020, three days after testing positive for the deadly disease.

A week earlier, his successor in the diocese, Bishop Serverus Jjumba had asked the faithful to intensify their prayers for Kaggwa - this was after news spread that on January 6, he had removed his episcopal ring and crucifix that he asked the medics at Mulago to put in a box to be handed to “a bishop who will come for me.”

That very day (January 6), a meeting that was attended by government representatives sat at Kitovu, the seat of Masaka Diocese to manage the situation. Hundreds turned up at Bukalasa Minor Seminary in Kalungu district on Saturday for his final send-off despite calls by the diocesan leadership for the faithful to keep away due to the Covid-19 restrictions on mass gatherings.

For 26 years, since June 24, 1995 when he was consecrated as coadjutor Bishop, Masaka has been Kaggwa’s home. For three years, he served under Bishop Adrian Kivumbi Ddungu until January 1, 1998 when he took canonical possession of the diocese.

He retired in July 6, 2019 and handed over the mantle to Bishop Jjumba. For all this time, Kaggwa’s residence at Kitovu turned into a court where all sorts of disputes raging from political, family and social were resolved. Many times, politicians ran to him to solve disagreements within their parties or governance issues in the districts covered by Masaka Diocese.

Regardless of one’s religious background or social standing, Kaggwa would offer his time, counsel and support.

“No terms and conditions were necessary to access his house; we needed no appointment, no invitation... he was readily available with open hands to everyone,” said Grace Kasozi, a beneficiary of Bishop Kaggwa’s school support programme.

On several occasions, this writer travelled in the same car with Bishop Kaggwa around Masaka Diocese, and once invited him for lunch on Easter day. In the car or at his dining table, you could be excused for thinking that he was not the Bishop given his rare trait of humility.

Instead of his domestic helpers serving us at the dining table, it was him serving them. What was most humbling for me is when one of his household staff who was seated next to me asked for a bottle Club Pilsner that the Bishop asked him to move away.

“Our guest is a Muslim and his religious beliefs don’t allow him to sit next one taking that kind of drink; you will have to relocate and sit somewhere else or take your bottle later,” Kaggwa told his staff.

I found this so humbling. Hardly would he begin his homily without recognizing my presence, going at lengths to speak about my strong Islamic beliefs but with a good relationship with the church - in line of call for peaceful co-existence because religion is meant to work for the good of the people, and not to destroy them through structural hatred.

In his eulogy of the departed prelate, the Kabaka praised Bishop Kaggwa for his inspirational services to the Catholic church and regretted the unfortunate incident in October 2020 when police violently dispersed a clan meeting he had attended with teargas. Meanwhile, Katikkiro of Buganda, Charles Peter Mayiga said Kaggwa was a beacon of hope for those facing various challenges and difficulties.

“Bishop Kaggwa’s ministry and way of life was a source of hope to many of us. Besides the spiritual endowments he bestowed upon us with love, his remarkable contribution to all he met and those that listened to his messages was to give hope,” Mayiga said.

“There are those times he would summon you. For any priest to be summoned by his bishop makes you tense. But you would get before him, and once he realized that you are somehow scared, he would calm you, serve you a cup of tea as you discussed other issues before bringing out the real reason why he summoned you.”

As his casket was rolled into the cemetery chapel at Bukalasa Seminary where he was buried, many failed to control their tears. Sadly because of the Covid-19 restrictions, they couldn’t get close to the grave but only follow the proceedings on screens mounted on two trucks outside the chapel.

Through his homilies and pastoral letters, Kaggwa positioned himself as a courageous advocate of social justice, a defender of human rights who spoke out against all for abuse of power, corruption and impunity.

For instance, when former presidential candidate Robert Kyagulanyi Ssentamu was first arrested in August 2018 in Arua, Kaggwa’s was the first voice to come out criticising the opposition politician’s brutal arrest and detention in a military facility.

He would go ahead to demand for his release and all his colleagues with whom they were in detention. In June last year during his episcopate silver jubilee at Kitovu cathedral, Kaggwa criticised the Electoral Commission’s plan for the 2021 general elections that he said would not deliver free and fair elections.

“Even if I get killed now, I don’t care, after all, I have celebrated my 25th anniversary as a Bishop, but the rights and freedoms of all players must be respected to give chance to [Ugandans] choose a leadership that we all desire,” Kaggwa said at the time.

Before he fell sick, Bishop Anthony Zziwa of Kiyinda - Mityana Diocese told mourners, Bishop Kaggwa joined other members of the Uganda Episcopal Conference, the umbrella body of the Catholic bishops of Uganda, to author a pastoral letter that was highly critical of the security forces’ handling of opposition presidential candidates and their supporters. Bishop Zziwa is the reigning chairman of the episcopal conference.

Kaggwa was the third ordinary of Masaka, one of the oldest Catholic dioceses in sub-Saharan Africa in modern times - taking over the diocese from Ddungu who had inherited it from Archbishop Joseph Nakabaale Kiwanuka, the first black African bishop.

The diocese he went to in 1995 had been plagued by the HIV/Aids pandemic, poverty was high, and with a high number of orphans and widows.

Through various interventions implemented through Caritas Maddo (Masaka Diocesan Development Organisation), many household, regardless of their religious backgrounds, were helped out of poverty through initiatives like the cow project that promoted dairy farming.

The farmers were assured of market for their milk at Maddo dairies - a milk processing plant near Masaka town. He strengthened the capacity of organisations like Kitovu Mobile Aids Organisation and Villa Maria Hospital Home Care Organisation that carried out community outreach programmes, taking treatment and care for people living with Aids nearer to their homes. The organisations also offered educational and family support to children who were affected by the Aids scourge.

He was born on March 22, 1943 to Matia Ssentamu and Felista Nazziwa of Bulenga, Wakiso district. He began his educational journey at Ssumbwe nursery school in 1950 before moving to Lubaga Boys Primary School in 1952. During the six years he spent at Lubaga is when he got the urge to join priesthood.

His parents had left him home when he heard a priest at the neighbouring village celebrating mass and picked interest. When he shared with his parents, they welcomed the idea and in 1958 took him to Kisubi Minor Seminary for his early formation studies.

He stayed at Kisubi till 1963 after completing his O-levels and joined Katigondo Major Seminary, Masaka in 1964 for philosophical studies. A year later, he was sent to Urban University, Rome, from where he graduated in 1971. He was ordained into priesthood on December 12, 1971 at Lubaga Cathedral in Kampala by the late Emmanuel Cardinal Nsubuga before he was posted to Nswanjere Junior Seminary as a teacher.

He was to later lead efforts for the establishment of St Mbaaga National Major Seminary, Ggaba near Kampala while at the same time, he taught Latin and English at Kisubi Minor Seminary. In 1985, he was appointed the parish priest of Christ the King Parish in Kampala but after one year, he was sent back to Rome for his Master’s and Doctoral studies at Lateran University. He studied Canon and Civil laws.

While in Rome, he served as vice rector in charge of academics and students’ welfare at Collegio San Paolo Apostolo. He held the position between 1989 and 1994. In 1995, he was appointed coadjutor Bishop of Masaka and became diocesan Bishop in 1998.

Served everybody irrespective of religion or social standing, very important characters of a church leader, including helping the poor as the Lord commands. Great work indeed. May the Lord Rest His soul in eternal peace.
Quote | Report to administrator
Refresh comments list
RSS feed for comments to this post
Add comment