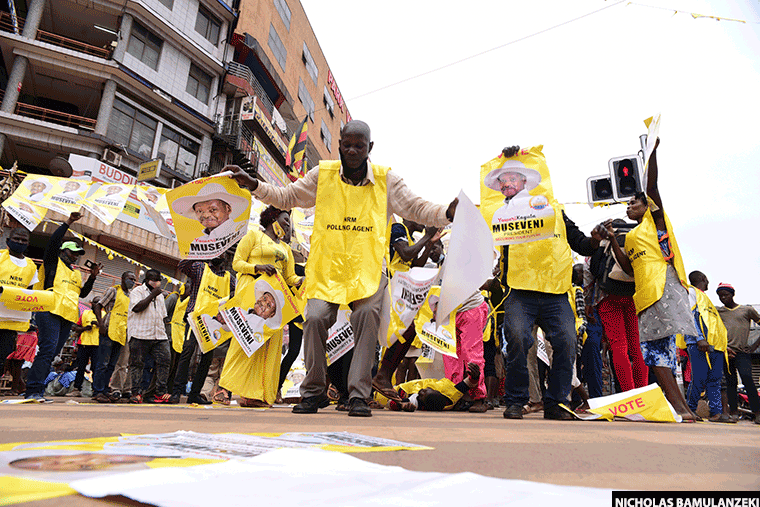 On a chilly morning of January 14, Ugandans woke up very early to go cast their votes for president and parliamentarians. By 5am, queues were forming at polling stations as voters waited for the Electoral Commission officials to turn up.

The usual Kampala heavy traffic was nowhere to be seen and the few taxis and boda bodas that were transporting people had doubled their fares. On the streets, few shops were open and a few street vendors selling different merchandise could be seen.

One woman selling vegetables was heard calling out to passersby to buy from her, but they only gave her a deaf ear. When I asked some of the traders why they were working instead of going to vote, many of them said they were first making some money and planned to vote in the afternoon when the lines at the polling stations have shortened.

But an old woman selling lemons along Ben Kiwanuka street said: “I got fed up of participating in elections and that is why I woke up in the morning and came here to look for what to eat.”

Contrary to earlier heavy police and army deployment within the city centre before election day, very few security personnel, especially on patrol cars could be seen on the streets and those who had promised to take over the high-rise buildings and arcades in the city were also not in sight.

Instead, there were motorized patrols (including police motorbike convoys), but the armed forces remained peaceful and even helpful at the polling stations. With an image tarnished by the way they handled the bloody November 18 and 19 protests, security forces seemed to be bending over backwards on polling day to clean up their image.

At Makerere University primary school polling station, for example, the policemen on duty were on the lookout for pregnant women, the elderly, disabled and even those looking too tired in the long queues. They would guide them to the front, to vote and leave.

Most of the polling stations around the city centre had a high voter turnout, although the observation of standard operating procedures (SOPs) was very poor with no social distancing and no hand washing facilities, save for a bottle of sanitizer at the entrance of the cordoned-off area.

At Kamwokya playground polling station, voters only used half of the dusty field while in the other half children could be seen playing football while three international election observers stopped by to observe the process. Here, a voter, Hadija Nakaweesi, said that she was only voting for a presidential candidate because she did not know the contestants for the parliament.

“I never saw anyone contesting for the MP position campaigning in my area; so, how can I vote for someone I even do not know? None of those contesting approached my area to ask for votes; moreover, whenever we get problems they do not care to help us,” she said.

This was also the first time I was exercising my civic duty to vote for my leaders and there was no way I would miss out. At about 1 pm after moving through Kampala, I boarded a taxi to my polling station, which is about 7km from the city center.

When I reached, about five people stood in the queue for my name group ‘A to M’, but I was told the queue had been long just two hours earlier. However, for the group ‘N to Z’ a very long queue still stretched out. I sanitized and joined the five to shuffle to the polling desks.

At the registration desk, I handed in my national ID for the official to crosscheck my name on the register and tick it. There was no biometric machine here to verify voters and the same went for many polling stations I visited. I then proceeded to cast the presidential vote first, where the ballot box was already filled to the brim, then on to the area MP and finally to the woman MP, whose ballot boxes where not so full like the presidential candidates’ box.

By 6 am, he was already at the polling station ready to witness the delivery and unpacking of the ballot papers and start voting, but he was disappointed about the delay to deliver the voting equipment. Voting at this polling station started at 9:30 am and Kasule only got to cast his vote at 1 pm!

“Staying in the queue for a very long time and the slowness of the voting process really frustrated me. Last night I slept with my national identification card, voter location slip and mask ready and I woke up early with the aim of quickly casting my voting. But I spent almost three hours in the queue. Since I am voting for the first time and voter education was so poor, while I was inside the voting area, after voting the first candidate, I found myself getting confused on where to proceed next and, therefore, I had to inquire from the polling officials,” Kasule said.

He, however, added that the voting process around his polling station was surprisingly peaceful and went on smoothly apart from a few glitches like the failure of the verification machines and failure to observe the SOPs. When asked why he had decided to take part in these elections, he said he mainly wanted change in leadership, because from his birth, he is seeing the same president.

“I want to bring in new, young leaders who have fresh ideas and up to speed with the current trends and problems affecting us the young people. The current ones have done what they can; so, let others also take it from there,” he said.

After voting, Kasule vowed to remain around the polling station until all the votes were counted and the winners announced. I left, wishing him good luck. At Mukwano Arcade polling station, 29-year-old Marvin Kinene was also voting for the first time.

He reached the polling station at about 10 am and found a very long queue, but since he found a number of his friends that had come earlier, they helped him jump the queue and by 11 am, he had finished to cast his vote and unlike others who waited around, Kinene said he had other things to do.

Although at 29 it means he was eligible to vote in the past two general elections, Kinene had never participated in any election.
But because now he is a fully independent adult, he said he was now experiencing problems affecting his life without a parental cushion and he needed to vote for leaders who can address those problems.

He was grateful that the elections were peaceful although, like many others, he was frustrated with the shutting down of the Internet.

Gertrude Musisi, a voter in Kiguli zone, Mengo Kisenyi did not wait for the counting of votes and declaration of results at her polling station after voting. She said this was because she remembers a situation in 1996 when she witnessed the vote counting of Paul Kawanga Ssemogerere and Yoweri Kaguta Museveni, and the chaos that followed, which nearly cost her her life.

“In 1996 after voting at City Square, we stayed until voting counting in the evening but as soon as Ssemogerere was announced the winner there, the army started firing bullets and there was a stampede as we scattered in different directions. When I reached home, I had injuries all over my body and had even broken a leg. From that day, after voting, I go straight to my home,” she said.

Agnes Ntabbade, a resident of Mengo Kisenyi, woke up only to find the road in front of her house condoned off by the Electoral Commission to be used as a polling station following the construction of a storied building in the place which was used as the polling station in previous elections.

“I was quite surprised when I woke up to go to Owino market to buy food only to find the place around my home cordoned off and I had to ask for permission from police officers to pass. I think it would have been good if we had been informed about this earlier,” she said.

Since she was just a stone’s throw away from her polling station, she did not bother to go early and opted to first do her house chores until the queue shortened. This was her fifth time voting and whereas she said that in all the previous presidential elections she had voted for the same candidate, this time round she was going to cast her vote in favour of a different one.

When evening came, most of the polling stations I had visited announced victories for the National Unity Platform parliamentary candidates, as well as for the party president Robert Kyagulanyi Ssentamu. The final national tally gave victory to President Museveni (58.6 per cent) for a sixth term, but probably no other election has sent a louder message than this one.