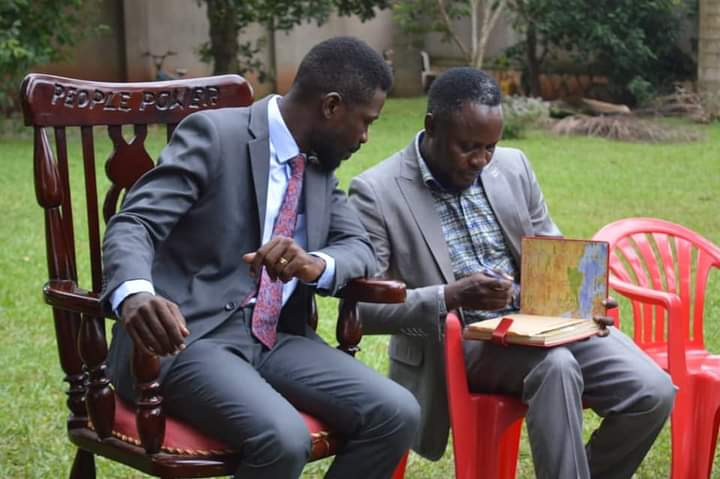 Hillary Kiyaga alias Dr Hilderman is among the entertainers who have secured themselves a place in Uganda’s 11th Parliament after trouncing Trade, Industry and Cooperatives minister Amelia Kyambadde in Mawokota North constituency.

You can start practising calling him Hon Kiyaga soon. Dr Hilderman joined Geoffrey Lutaaya (Kakuuto) in successfully making the crossover into politics last week. In the run-up to the 2011 general election, Dr Hilderman remixed his song Amelia to support Kyambadde’s candidature for Mawokota North constituency as she ousted Peter Mutuluuza.

The big hit was Kyambadde’s official campaign song and the two were always seen together as they canvassed for votes. But after her 2016 re-election, Dr Hilderman started sounding increasingly critical of her work and expressed interest of replacing her.

Speaking to The Observer on Monday about his surprising landslide victory, Hilderman said what enabled him to beat the minister was the fact that he had taken the burden to traverse through the whole area and find out the problems affecting the people at the grassroots and the needs of each particular area.

He also attributes his success to his excellent coordination of his party’s activities, National Unity Platform (NUP) in Mawokota, which also enabled the presidential candidate Robert Kyagulanyi Ssentamu to win massively in the area. As a new member of parliament, Hilderman says his first focus is going to be extending clean water to the people of Mawokota North.

“Getting clean water is a huge problem in my area and most people have to move long distances to get it while those who have it nearby, it is dirty and not hygienic to use. I am, therefore, going to start by lobbying for boreholes that can provide clean water and make sure that at least every village has one as we wait for piped water,” he said.

He also hopes to extend electricity to the people in his area through tapping into the Rural Electrification Programme and increase electricity coverage from the current 20 per cent to at least 40 per cent in the next five years. Since majority of the voters in his area are the youths, Hilderman also says that he is going to engage them and find out the different livelihood programmes they would like to engage in.

“The youths have been a major pillar in my victory and, therefore, I cannot leave them behind. I am, therefore, going to sit down with them and find out which livelihood programmes they are comfortable with, instead of us just imposing programmes on them. After the whole election period is over, I am hoping to hold a summit of all the newly elected leaders of Mawokota county and try to find ways of improving the livelihoods of our people and doing what the previous leaders failed to do,” he said.

Though he is very excited about securing a parliamentary seat, Hilderman is not entirely happy about the whole election process since his presidential candidate and party leader Kyagulanyi alias Bobi Wine lost to President Museveni. He, however, says the fight is not yet over since they plan to contest the results in court.

“Although I am happy that my presidential candidate won by 70 per cent in my area, there were a lot of irregularities when it came to the presidential election nationwide, especially when it came to the delivery of declaration forms to district tally centers and our team is on ground gathering the necessary evidence and our legal team is already set because we expected all these.”

Amelia Kyambadde and Dr Hilderman were at one time close friends, but that relationship has since gone down the drain ever since Hilderman showed his interest in the Mawokota North parliamentary seat.

“Our relationship is not good at all. We have taken a long time without talking and it is like we do not know each other at all, even though I sang for her. If we had a good connection, maybe I would not even have contested against her because I would have told her the problems of the people so that she could address them; so, there would be no need for me contesting. But since now I am the new leader, it is my responsibility to connect with her for the good of our people.”

About the fate of his music career, the Mazongoto singer says he had taken a break from music to first concentrate on his political career, but since he has now won, he hopes to resume with music though on a very low key; his main focus musically is going to be discovering and uplifting new talent especially in Mawokota, so that more Dr Hildermans can come up.

So Mr Wante,what happens if government(s) that have known this place for ages fails on its work,should we look on or shutter in dispair!!

He said loby and if you understand that then you will know that its not criminal for an MP to lobby and fundraise for his people to live better.

Those are within the mandate and care of any genuine leader at any level,it doesnt need to first be included into the constitution sir.
Quote | Report to administrator
Refresh comments list
RSS feed for comments to this post
Add comment