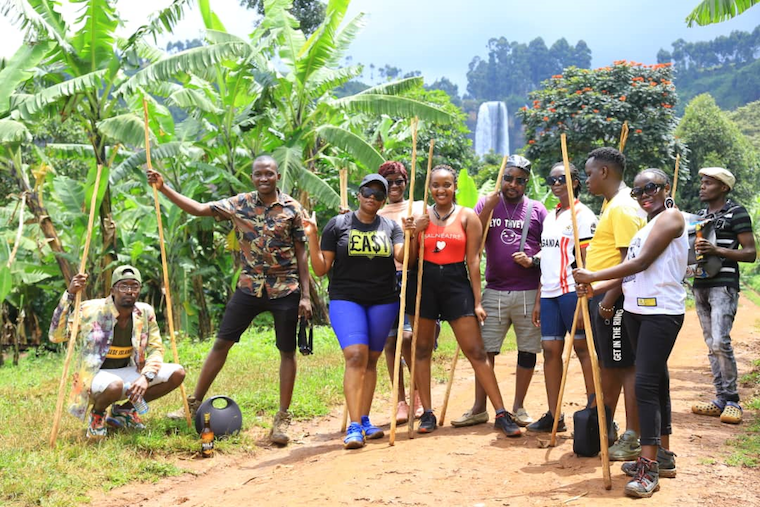 A group of youth pose for a photo at Sipi falls

Since June 2020 when the government partly lifted a lockdown instituted three months earlier to curb the spread of the coronavirus to allow inland travel and domestic tourism, young people have unusually embraced road trips to far-flung destinations. And they have taken the party with them.

Posts by tour operators flash all over Facebook, Twitter and WhatsApp, calling for those willing to join excursions to different parts of the country.

The public, especially the young people, always respond by turning up in large numbers for the weekend trips and flooding their timelines with pictures and videos the following week. Key to these trips is a trend of music going by the packages offered by the different companies.

In March this year after the country recorded its first coronavirus case, government closed public transport, large gatherings, tourism, bars and recreational centres among others.

Never before were Ugandans put in a situation where they could not go to a bar, cinema, discotheque, spa or live concert to shake of the daily stresses of life. The current trips could be a direct reflex to a need to shake off the pandemic blues, considering that most university and college students are still on ‘lockdown’.

Suddenly, domestic tourism is very attractive; several people are taking the party to the road. Hilda Nabakooza has been on two such trips heading to Lake Bunyonyi in Kabale and Sipi falls in Kapchorwa since the lockdown was partially lifted.

“As a country, we had been under lockdown for so long and I surely missed being on the road, travelling from one place to another, interacting with people. Generally, I thought my social life was lacking,” she said.

According to Joel Wakanyansi, the team leader at Kempten Safaris, one of the companies organising such group trips, the hunger for the road has been mainly caused by the prolonged lockdown and closure of the happening places, robbing many revellers of their social lives.

“The other issue is that the pandemic took a toll on people and many were devastated. Travel being therapy, was the only remaining resort to deal with the negative results and help them along the path to mental recovery,” Wakanyansi said.

To give their clients a special feel, Wakanyansi and team normally draw up packages with attractive activities to enable them make merry on the road.

Such activities include outdoor cinemas, silent discos, and dance and yoga sessions, most of which clients may not have done in a long time, or ever. All of these are done in observance of the standard operating procedures to control the spread of Covid-19.

Baker Masheta, the head of Operations and Product Development at Travel Maniacs, another company that organises such group trips, also emphasised the importance of a music feel on these trips, including getting the musicians themselves on the road.

“At Travel Maniacs, we have moved to blend music and art into travel. We know how much youths love music; so, we’ll be working with different artistes on trips,” he said.

The lockdown kept out international tourists who are the biggest market in the country, affecting hotels and safari lodges that had to even lay off staff.

To keep afloat, they significantly reduced their rates to less than a half and to attract domestic tourists. This has played well into the financial range of the youth many at universities, fresh graduates and even just starting work.

According to Victor Dalla, the manager at Victoria Forest Resort Kalangala, the accommodation and feeding prices are low at the moment and they are attracting more of the young people.

Not that this has helped the hotels’ dire economic situation, as Jean Byamugisha the CEO, Uganda Hotel Owners Association, recently told The Observer. She said since the overhead costs for the hotels remain the same, they are not turning a profit, regardless the surging numbers in domestic tourism.

However, the low accommodation rates have played in favour of tour operators, who have scaled down on package fees, but significantly increased on their client numbers per trip.

“Well, for what I would say, the desire for youth to travel is not new at all, though the biggest question has revolved around affordability and it also has much to do with timing,” Wakanyansi said.

The number of youths going for these trips increases every day and because of the multiple planners that organise, it gives the client several deals to choose from, according to Masheta.

“The key element here though, is having a long-term plan and knowing which problems your plan is solving. Get that right and all will fall into place automatically,” he said.

Social events are still not allowed in the country but organisers have become more creative in light of all this. Many such as concerts have gone digital with some musicians and promoters opting for online shows, although they don’t bring in much in terms of revenue.

Others such as the Blankets and Wine too went online this year and comedians are also taking their weekly gigs online. Most notable, however, will be this year’s Roast and Rhyme, whose organisers have decided to take it to the wild into Murchison Falls national park. The event, usually held at Jahazi Pier in Munyonyo, combines a barbeque atmosphere with live music.

The continued closure of social events did not stop the annual Twitter Barbeque party organised by a section of Ugandans on twitter to happen a month ago. Revellers, who were rallied mostly on social media, hit the road to the tourism city of Fort Portal with the fanfare, visiting tourism sites in the area and making merry all the way.

If nothing else ‘positive’ comes out of this pandemic, it will definitely open up several new ways of getting the party going even long after everyone is vaccinated.