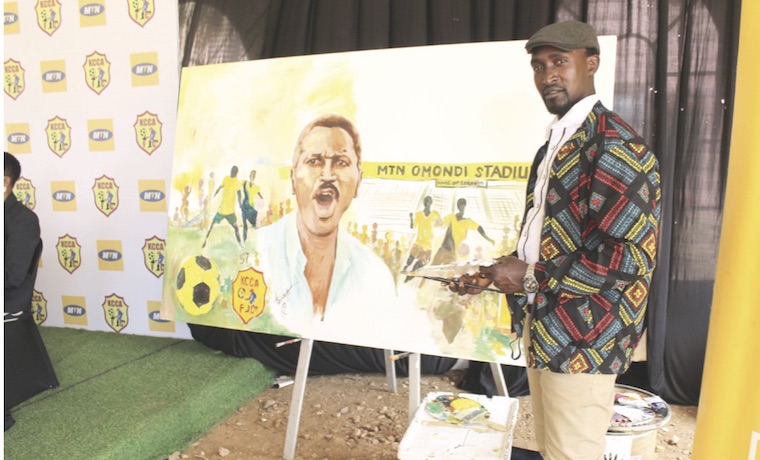 While pursuing his bachelor’s degree in Industrial and Fine Art at Makerere University more than ten years ago, Rolands Tibirusya had a tendency of defiance.

Although the norm of fine art was about being in studio, to paint and draw, Tibirusya preferred showcasing his visual art skills by drawing at functions, from weddings to parties, corporate and business events, as they went on. Last Thursday, as the latest MTN and KCCA FC partnership came into effect for the next 10 years, there was Tibirusya, some necessary distraction, so it would seem.

As speeches went on, choreographing the details of this new deal, Tibirusya was painting away. It was the commemorative piece to earmark the occasion; one where the club’s ground was named the MTN Omondi stadium.

To cap this recent milestone between MTN and KCCA in relation to the latter’s stadium, Tibirusya painted the face of club legend, Phillip Omondi (RIP), embedded in a stadium-like structure in the background.

And indeed, for all those who met Omondi in life, they could not have picked a better impression of him. Such are the gifted hands of Tibirusya. But more importantly, is putting into context the significance of his recent piece of work. Tibirusya explained that such works are a watershed for big occasions, where posterity is of the essence.

This painting is the foundation stone, where there was none laid in this case.

“Art is the purest form of expression, as it is able to capture the emotion and spirit of the moment in a special commemorative done by a visual artist. This creation has become a memorabilia for both institutions, KCCA FC and MTN. This kind of art depicts the essence of the occasion,” Tibirusya said.

Officials from KCCA and MTN, led by Lord Mayor Erias Lukwago autographed the painting, that will forever be a symbol of the partnership entered into.

After the function, Tibirusya, who had started working on the painting at 5 am in his car at the Game stores parking lot, was marooned by people that wanted a painting of a similar kind. Maybe it was not wrong for Tibirusya to defy studio painting for live painting at occasions, because, clearly it is trendy.