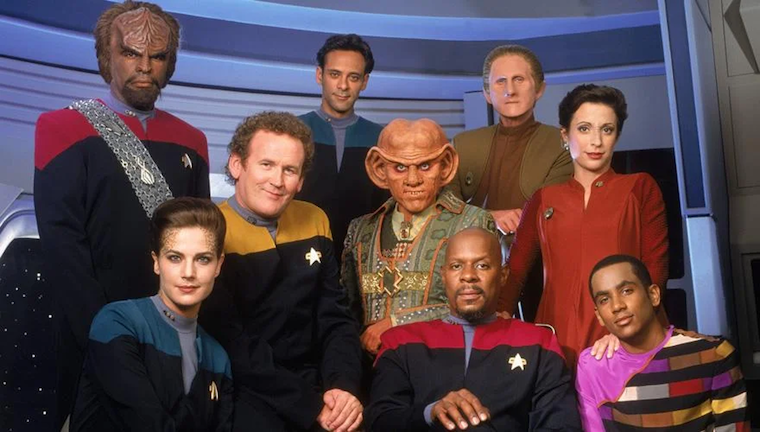 My journey through the Star Trek universe has stalled. I was making steady progress until Star Trek Voyager, which is painfully dull. Deep Space 9 is Voyager’s polar opposite; I could not get enough of it.

The show, which debuted in 1993, was controversial when it first aired because it was such a stark departure from the themes that Gene Rodenberry had espoused when he launched Star Trek. Star Trek is an optimistic franchise; one where righteous ideals such as honour and kindness win the day.

Star Trek is also highly rational. It imagines a future where science and rational thinking are prized above all else. Deep Space 9 was not necessarily a slap in the face of everything the franchise previously stood for, but it definitely broke the mold. First of all, it was the first serialized Star Trek show.

Where The Next Generation (TNG) was formulaic, telling individual self-contained stories, Deep Space 9 did not hesitate to craft long, complex, multi-season arcs. More importantly, it was not afraid to explore the supernatural. And yet, their cast was also littered with deeply religious characters.

The notion that a Star Trek show would highlight protagonists who would not abandon their beliefs in the face of scientific opposition, turned a section of Star Trek fans against Deep Space 9. But others recognized the exciting opportunity it presented. That is not to say that the show’s only attraction is its stance on religious matters. Let me say this, in case it was not clear: Deep Space 9 is the best Star Trek show in the franchise.

Eliminate all the religious controversy and you still have a well-made, carefully paced story with highly entertaining characters. I dare you to name a better Sci-Fi villain than Dukat. The man spends the entire show fighting to earn the love and respect of the very people he tortured and enslaved for decades; and yet, you cannot help but love him. And what can you say about Kai Winn? I don’t think the genre has ever produced a more infuriating antagonist.

Winn is the very personification of passive aggressive evil, always flashing that sweet smile of hers, lulling her victims into a sense of false security with that sugary voice before allowing her ruthless ambition to bring them to ruin. Sisko is so wooden when you meet him, but his quirky, manic energy grows on you (Yes, In the Pale Moonlight is magnificent).

Odo is so lovable, haunted by his past, plagued by his inability to connect, caught between his loyalty to the station and his desire to rejoin his warring species.

Quark singlehandedly rehabilitated the Ferengi, the most cringeworthy alien species in all of science fiction. Nog and Rom (along with Garak) are probably the best characters in all of Star Trek, a claim I never imagined making when I first saw their ugly faces. Seriously, the cast of this show is unbelievable.

The characters shine so brightly because the show’s serialized storytelling allows them to grow and evolve. When I spoke about TNG, I suggested it was the perfect starting point for any viewer that wanted to experiment with Star Trek. I take that back. Skip TNG; you can watch it later. Start with Deep Space 9.