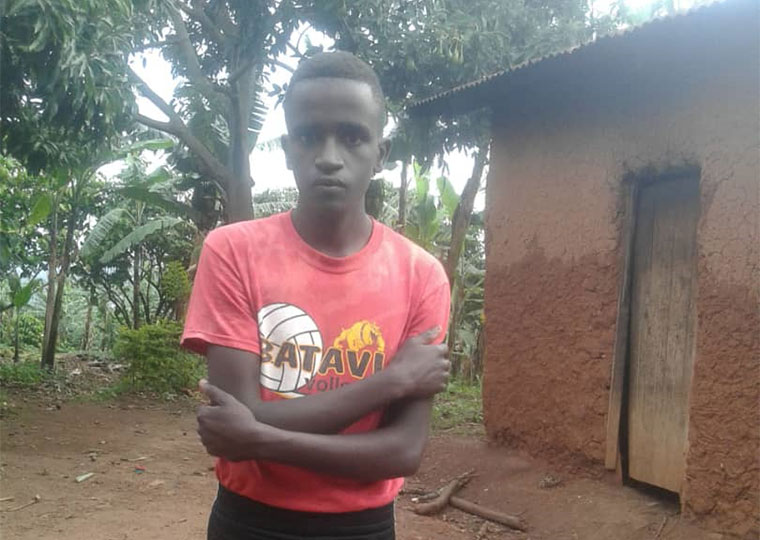 The training that targeted young journalists also had a rich participation of students drawn from Boona School of Journalism, found in the heart of Rukungiri town. Although most of the participants were young, one of them looked even much younger in comparison to others.

As his colleagues clamoured to have something to say, he largely remained silent albeit paying a lot of attention. He would rarely get his eyes off the facilitator. Occasionally, he would mumble something and then go back to concentration. Looking at him, I could not help but wonder whether something was occupying his mind.

During the tea break, he gathered the courage and approached me . But before I could take my eyes off the phone to look at him, he was long gone. But he had dropped a small piece of paper on the table before me.

“I’m sorry for disturbing you but I kindly ask you for a talk like for two minutes because I feel like you’re the right person to help me be a good journalist. Can you give me your number?” the note read.

I wondered how I could give him my number when he ran away before I could read his note. I liked the idea he wanted to become a good journalist. During another break, he followed me out and this time mustered the courage and talked to me.

“My name is Justus Baryanyijuka, I’m 17 years old and a student of Boona School of Journalism. I really want to become a good journalist; that’s why I want to speak to you in order to help me achieve that goal,” he said.

I listened as he explained why he wants to become not just a journalist, but a good one and why he thought I could help him. But at 17 years you are so young! I remarked. He explained that after completing Senior Four in 2019, his only hope was to join an institute to study a course that would lead him to a job he desperately needed.

“I have always dreamt of becoming a journalist, but also it’s the cheapest course I could do after my Senior Four,” Baryanyijuka, who could now look me in the eye, said.

He said he was paying his own fees [Shs 300,000], which he struggled so much to get. Therefore, he thought, spending his little money to continue pursuing secondary education that could result into no qualification, was not wise.

“There is nothing professional that you can do after S6. So, I thought to myself, my best bet is to use this money and get a certificate in journalism; maybe in the future I will be able to go back for further studies,” Baryanyijuka said.

But again, what business does a young man of 17 have paying his own school fees? Where were his parents? I saw him fidget when I asked that; his face became pale, betraying an anger.  He kept quiet as if trying to warn me off a minefield. After about a minute of silence, with his head bowed he murmured something.

“I know they are alive, but I don’t know where they are,” he began what seemed like a painful conversation. “I last saw my father Jackson Bakijukayo, I think when I was in P4.”

He does not know much about him. Neither does he know why he abandoned them with their mother Lydia Mucurezi and two of his brothers, Aggrey Atwijukire, 19, and Jackson Nuwagaba who recently made 10 years.

Mother takes off too

Baryanyijuka’s mother used to be a trader in the mobile markets the Banyankore commonly call ebikomera. She used to sell chidren and women’s clothes. Baryanyijuka does not know what happened to her and the business, but one day she stopped going to work without explanation.

“One time I asked her why she doesn’t go to work anymore and she said I shouldn’t worry, everything was okay. But this didn’t seem to be the case. It seemed something was bothering her. Most of the time she didn’t leave the house,” he said.

Then came the day Baryanyijuka wishes he could forget! The day broke like any other; his mother, still distraught like she had been for days now, undertook her usual routines. Then she packed most of her clothes and around 5:30 pm told her two older boys to escort her.

“At first I thought she was going back to the market, but again, it was late in the evening. When things failed to add up, I asked her where she was going,” Baryanyijuka said. With that question, which she had no answer to, she told the boys to go back home.

“Don’t ask me questions because I also don’t know the answers; just go back home,” he remembers his mother telling him and his brother Atwijukire.

They went back home thinking she would be back the next day. It is almost four years later and she has not! That is when Baryanyijuka became the ‘parent’ in the home. In the weeks following her disappearance, their mother would call a neigbour to find out how her three boys were doing.

And like all children, every time she talked to them, they would ask tirelessly when she was coming home.

“You don’t need to know because it will not change anything,” she would tell them. The phone calls became fewer and far between. After six months, they dried up completely and her phone went off.

When it became apparent that Baryanyijuka and his brothers had to live their lives in unusual circumstances of being without their parents without being orphans first, he hit the road running. With Atwijukire who was in Senior Four at the time, Baryanyijuka started to do all sorts of causal work in order to get food and school fees.

He was able to pay Shs 190,000 school dues for four terms until he finished Senior Four at St Jerome Secondary school, albeit with difficulties.

“I remember I was suspended for several weeks for failure to attend the holiday classes. There was no way I would attend those classes yet I had to look for school fees for third term in senior four,” he reminisces.

When the results came,  he had aggregate 35, a very decent score, given his circumstances and how many lessons he had to miss. For his young brother Nuwagaba, who is now in P.1 at Kebisoni Integrated Primary School, the headmaster of the school that he attends waived the fees because he was friends with their mother. He is also Nuwagaba’s godfather. All Baryanyijuka does is to look for food and other home necessities.

As for Atwijukire, after he completed Senior Four in 2018, he too disappeared. Like his parents before him, he refused to say where he was going.

When he called several months later, “he said he wasn’t also doing well, therefore, it didn’t help for us to know here he was because he couldn’t be of any help”.

All this information is written in Baryanyijuka’s diary; a good habit, I noted, for someone interested in our profession.

“Everything that hurts me I have to write it down because I want to remember it,” Baryanyijuka says.

He says education is his only saviour and the key to reunite with his parents and brother.

“I know if I get an education and become something, I will either look for them or they will look for me, because then I will be of some benefit to them. I’m encouraged by the fact that they are still alive,” he said.

After telling me the story, he was very quick to add that the reason he shared it was not because he needed any pity.

“I want to be a better journalist and I think you can help me. Not even my classmates know this story, I shared it with you because you asked,” the proud, young man says.

After telling me the story, he took a deep breath, like a load had been lifted off of him. That evening after the training, we hopped into a taxi together to go to his home in Ndamankamba in Kebisoni town council, Rukungiri district. His house, which he says was built by his mother, stands on a small piece of land, about 10 decimals.

It is a semi-permanent house with mud- and-wattle walls plastered with sand. It is a typical village house with a chicken coop to its right and a few meters away, a recently-constructed mud-and-wattle pit latrine. The land is so small that they hardly have anywhere to grow any food.

“I struggle for everything; the transport to take me to school, the school fees and looking after myself and Jackson.”

From Ndamankamba to Rukungiri town, he uses Shs 10,000 to and fro.

“I sometimes do stories for Radio Boona, which gives me transport to go to the field which I use sparingly and retain some to take me back home. Otherwise, I normally do all sorts or casual work to [supplement my finances],” Baryanyijuka says.

Yet amidst all these trials and tribulations, he is a hopeful young man – boy, really – that he is on the right path to becoming a good journalist.

“I know the future looks very uncertain but I’m very hopeful one day this nightmare will end.”

From his determined and optimistic nature, that is a byline you all should watch out for in the near future. Baryanyijuka can be reached directly on his mobile phone 0784849815

But this one here is particulary hurting. To see your mother leave out of frustration is just as confusing and as hurting as it can get...
Report to administrator