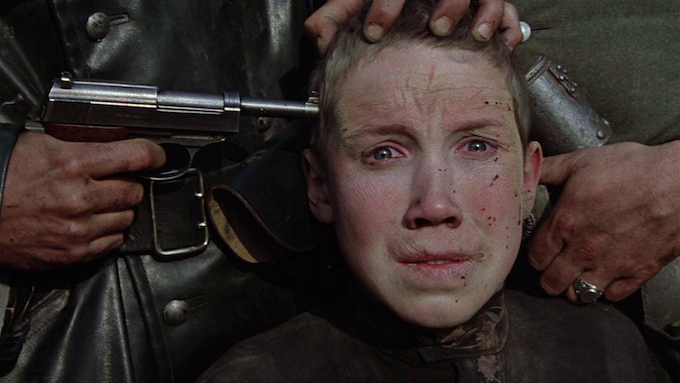 When talking about movies that fundamentally change a person on a psychological level, Come And See (1985) always comes to mind.

War movies have a reputation for creating barriers between the viewer and the actual events of war. This includes the supposedly realistic blockbusters most of you know.

Despite their visceral violence, you are not allowed to forget you are watching a movie. This is why Come And See is special. It rejects all the imagery of post-war glory depicted by its propagandist predecessors like the Fall Of Berlin (1950), Moscow Strikes Back (1942), and Fascist Barbarians: A Lesson Not Learned (1971).

Come And See scrubs away the perceived magnificence of combat, and the patriotism, leaving an open wound that begs to be seen for what it truly is.

Elem Klimov subverts expectations by discarding the common tropes of the genre—the grand speeches, the epic stakes, the frenetic clashes—in favor of highlighting the personal experiences of Flora.

The film tears asunder the warm images found in pro-conflict movies, crumbling them to reveal the bitter realities of violent quarrels: the death, destruction, and wrongs that can’t be righted; incurable wounds that reverberate through the generations. By the time this story comes to a close, you are not sure whether you watched a film or a documentary.

Alexei Kravchenko who plays Flora was just fourteen years of age when filming started in the 1980s and Klimov knew that he had to protect the young boy, which is why he hired a hypnotherapist to preserve Kravchenko’s mental state while on set. It probably helped.

However, by the end of the film, Kravchenko had been fundamentally changed by the ordeal. He did not feature in any other project or film for the next decade.

The sounds in Come And See are unsettling and unnerving. The lighting is dark. The stalkerish camera work, common in the horror genre, emphasizes full facial close up shots that vividly depict the grim psychological pressures that war exerts on young minds. Through Flora’s eyes, viewers witness the destruction of innocence and the erosion of sanity.

Come And See is sometimes derided because it has a messy, disorganized narrative. But that is the point; war is chaotic, and this film aims to portray that chaos. Some moments are mundane, filled with the minutiae of ordinary living, such as the search for food. Other moments are the stuff of nightmares, choked with burning buildings, decaying bodies, and screaming voices.

This film is disturbing. But Klimov insists that if he had put on screen everything he knew of and experienced during war, he would not have the courage to watch his own movie.