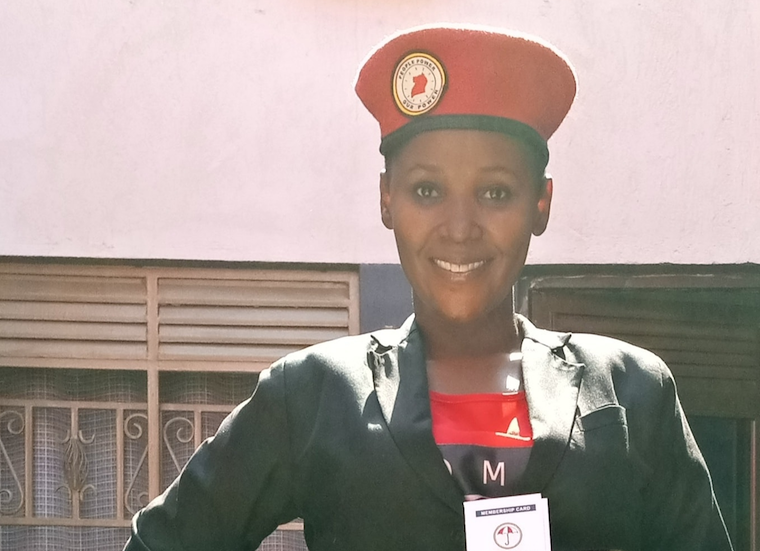 Lawyer Shamim Malende, 34, is a People Power/NUP diehard. She is the only woman on Robert Kyagulanyi Ssentamu’s legal team. Quick Talk found her in her office opposite KCCA, bedecked in a black sharia but no head scarf.

I just wanted to feel more comfortable, but I have the [People Power red beret].

Good afternoon; how are you doing?

Tell me about Shamim.

My name is Shamim Malende, aspiring Woman MP Kampala district on the NUP ticket. I am a lawyer working with Malende & Co. Advocates and I am its proprietor. I am one of Hon Robert Kyagulanyi Ssentamu’s lawyers. I am also a People Power lawyer and help to represent oppressed Ugandans [pro bono].

I am versatile and can associate with every person because I have been raised in all spheres of life from the upper class, to middle class and the ghetto.

You have worked with KCCA?

Yes; after opening my own law firm, I secured a job as legal counsel. It was a well-paying job but I did not enjoy what I was doing.

The department I worked under was involved in persecuting hawkers and vendors. I would look at all these people and feel bad but it was the job I was paid for. The money was good but I was not feeling comfortable… so I was there for about six months and resigned to concentrate on the law firm.

Why then did you choose politics and People Power?

Firstly, I looked at People Power as more inclusive, as long as you believe in change. They also denounced all forms of violence and demeaning people. NUP also plays politics of reconciliation and forgiveness, even the leader of People Power is an inspiration.

How do you find the political space so far?

[She sighs heavily and then smiles] It is really challenging but worth it. But one thing I have learnt is that political space means you are now for the people and that the people are your bosses, you are their servant.

There is also a lot of danger, because you don’t have privacy and life is risky. Sometimes people follow your moves, threaten you with phone calls but all you do is keep in your lane.

Aren’t your relatives scared for you?

Of course so many are scared, but when I was joining politics, I consulted my parents and asked for their blessing, which they gave. They also talked to me about the dos and don’ts of the game and how they wouldn’t want me to be there, but it was my choice.

They said if anything happens to me, it will be God’s will. There was a lot of skepticism from relatives and sheikhs but they knew me as someone who doesn’t give up on what she wants.

Well, we wish you the best. How did you meet Bobi Wine?

I used to do a lot of legal services for people; so, one time I was contacted by parents of some boda boda guys that had been arrested for demonstrating and were members of People Power. By then I had not joined the movement. I went to court to represent them but did not know they were part of People Power.

It was the same time that Hon Kyagulanyi had come for a certain case. In the process, they noticed me and when the court ended, Chairman Nyanzi called me and was pleased with how I was representing their people. He was impressed by how I offered sacrifices when I was not part of the party; so, he told Bobi about my potential.

I went to their office and we were introduced and they asked if it was okay to join their legal team and I accepted. I was introduced by Robert Kyagulanyi to many other people like Benjamin Katana who is the head legal. After sometime, [Bobi Wine] elevated me to deputise Katana.

What else do you do apart from being a lawyer and politician?

We have a charity organization; so, I engage in charity walks, reachouts to the unprivileged, including widows and orphans. I also engage with the youth and women. Apart from that, I still have leisure where I visit my parents, spend time alone for self- evaluation, watch movies… I also like local music.

Who are your favourite local artistes?

Bobi Wine, of course [She bursts into loud laughter]. I also like Jonan Luzinda and King Saha.

I notice you are not talking about the man keeping you smiling.

[Looking surprised]: I am not searching, but I am not married. But when time comes, it will be made official and the person will be shown to the public.

I’m confused; not married and not searching?

[Laughing] Okay, I don’t want to talk about this now, but when time is right, I will give you one hour for that interview, because when I start talking about him, I don’t want to stop. I want it to be exclusive.

But who is your ideal man?

Although relationships are so short-term these days!

I think it all starts with the choice of person; we need to select people we are compatible with. Let me tell you, even when the person loves you, however much, when you are not compatible, you can never stay together. Compatibility makes adjustments easy and things will not go wrong. Most of the people today tend to rush for the physical and finances, but remember the physical fades and if it is what you like, you start questioning yourself after some time. But prayer matters in choosing a partner.

What would surprise readers about you?

I think I am not an outgoing person.

And that one thing you do that is considered ‘manly’?

I think I am too decisive and independent that I most of the time don’t ask for help even when I need it.

Isn’t that pride, though?

Not really; anti men are created to be keepers and providers and women are to be given. I am so solution-oriented like a man; when I get an issue, I will solve it immediately rather than crying for a week.

Your best moments so far...

There are so many; but emerging as one of the best students in my A-level and then studying law on government sponsorship, graduating and pursuing LDC which is not easy. Moments are countless, but also getting my own practice is one of them.

What are you reading currently?

I am reading two books: The Struggle For Freedom & Democracy Betrayed by Miria Matembe and Why We Get The Wrong Politicians [by Isabel Hardman].

Why do you think Kampala needs you?

I am well-informed when it comes to the law. Most of the candidates sent to parliament spend their first kisanja pursuing the law in order to understand how it works, but I am a legal mind which makes me exemplary.

I also belong to this generation of Kyagulanyi and I believe he is the next president and we have to come up with a different kind of politics, which is substantial. This generation does not need the many degrees one has but what you can do for them and understanding them.
[Quick Talk thanks her for her time and leaves].

Born in 1986 to Hajj Jamal Ahmed Sebuta Malende of the Mamba clan and Jane Frances Nassuuna. She went to Busaale primary school where she sang in the church choir, before joining Buziga Islamic Theological Institute in 1998 for O-level, and Aisha Girls High School in Mbarara for A-level.

At Aisha, she emerged one of the best students in the country (6th) with AAAA. She joined Makerere University in 2001 on government sponsorship to study Law and graduated in 2005 and proceeded to LDC in 2006, becoming an advocate in 2008.

After hustling for jobs like many graduates, she worked with her father for a while, earning only her transport, then tried other ‘side gigs’ until she set up her own practice in 2014.

I hear she Born in 1986 to Hajj Jamal Ahmed Sebuta Malende of the Mamba clan and Jane Frances Nassuuna. I have no reasons to doubt her parents, my issue is with the year when she was born i.e 1986.

At the time, the youngest Pupil to be admired in a nursery school had to be 3 years and above. TO be allowed in Primary one, you had to have minimum of 6 years.

This means that at the time Malende joined P.1 in 1988, she was already six years meaning that the latest she was born and if she never skipped or repeated any class she was born in 1982. Is it a people power thing to reduce age
Report to administrator
0 #3 WADADA rogers 2020-09-23 19:02
She went to Busaale primary school before joining Buziga Islamic Theological Institute in 1998 for O-level, and Aisha Girls High School in Mbarara for A-level in the year 1999-2000.

She has not told us whether or not she skipped some classes meaning she studied all classes like any other normal Uganda child undertaking the normal curriculum. Despite being bright, she did not mention whether or not she ever repeated any class.

They say age is just a number, but in a different context especially if one is still searching, you need to keep the age in check the Desire Luzinda way, your guess on her age is as good as mine,
Report to administrator
0 #4 Apollo Ekelot 2020-09-24 09:54
So this cutie joined Makerere when she was fifteen and started school before she was born??!!

There was a recent case of her boss as well. Is it a challenge with truth or it has become cool to conveniently 'adjust'. By the way I hope the author got the years correctly
Report to administrator
0 #5 Wazza 2020-09-24 15:19
She joined MUK in 2001, having been born in 1986? wow, what a bright student to join university at the age of 15
Report to administrator
0 #6 Dawudi 2020-09-24 22:00
Well that is your aspiring leader! Honesty is a very rare commodity, on a second thought: ages and class mate a thing to observe in NUP.
Report to administrator
0 #7 kikoola geroge 2020-09-25 21:40
well, honesty is important but women, world over ,have a problem with age., interviewrs should stop asking that question.

But also men these days. lok mzeei museveni 35 yrs in power has never told citizens his real age. why? now that age limit is removed, we assume one day he will tell the right age.

justice kavuma wanted to change his age to stay in service.i forgive malende, she is not alone. i think bse we dont have proper records regarding births, is the problem
Report to administrator
0 #8 Moses Byarugaba 2020-09-29 11:38
Guys, let's forgive the sweet lady.

This is a confession as well as a clarity, Shamim was my first love. She requested that I clarify the facts that the reporter misrepresented.

In the same month but separate days, Shamim and I were born sometime after the highly disputed 1980 elections. Please do the arithmetic and you will know our age.

Nonetheless, she never looks her real age. Shamim has always looked younger, hence the confusion to the reported.

Thanks all for your interest in the gorgeous lawyer's age.
Report to administrator