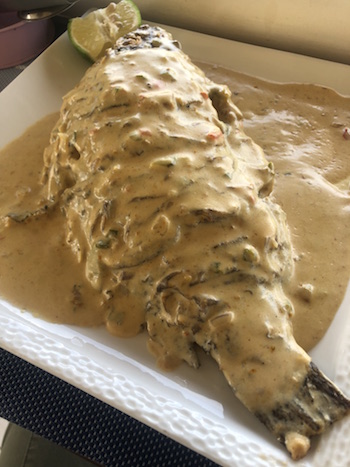 From the architectural design to the dishes, the Swahili influence at Little Cafe located along Kisoota road at the intersection of Ntinda and Kisaasi is impossible to miss.

Little wonder that Samaki wa Nazi (fish in coconut sauce), a popular dish in coastal Tanzania is their signature and most priced dish at Shs 25,000. It is deep-fried tilapia coated with thick scrumptious and slurpy coconut sauce and coastal spices.

It is surprisingly a quick meal served within 15 to 20 minutes after placing the order, probably the reason why the flavours did not penetrate deep enough into the tilapia that was also slightly still moist on the inside. It is served either with chips or rice but can also blend flawlessly with chapati or naan.

The smoother sauce even tastes better with the salty chilli pickle - served on request. A piece of lemon is served alongside the meal, but this only worsens the taste as it neutralizes the flavours. The soft chips are glazed with some tasteful and aromatic coastal seasonings.

The Little Cafe is indeed architecturally little on the outside, but the inviting aromas engulfing the air are large enough to interest and attract any passersby.

With a social media-addicted generation in mind, the cafe is dotted with charging sockets for diners who can’t keep off their gadgets.