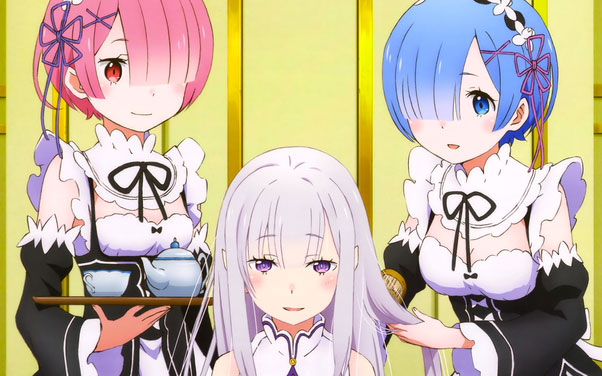 The problem with watching so much anime is that it becomes difficult, if not impossible, for new shows to surprise you.

Once you have seen all the tropes, every new anime feels like a slight variation on the dozens you have already seen. But surprises hit hardest when you least expect them. Re: Zero is 2020’s biggest surprise for me where anime is concerned.

This is because most isekai anime are worthless. The genre encourages laziness among writers. Most shows in the genre always feature an ordinary protagonist whose conventional reality is shattered when they are transported to a magical world filled with fantastical creatures.

The basic concept, on its own, is automatically alluring for some anime fans which is why writers can’t be bothered to tell compelling stories within the genre. They prefer to rely on the curiosity that isekai generates. Admittedly, that is just an assumption on my part. But what other reason can explain the wave of dull, unimaginative isekai shows that debut every single year?

And yet Re: Zero puts all others to shame. The show uses the same old isekai concept. Subaru is an excitable 17-year-old with no future. He does not have a job or formal education and he has no hope of securing either in the short term.

Subaru’s life changes when a mysterious event pulls him into another world. Unlike other protagonists, Subaru understands the tropes of the isekai genre, and is eager to begin his next great adventure.

The first few episodes of Re: Zero are nothing special. Don’t get me wrong. I loved them. That being said, they fail to provide a compelling reason for you to stick around. But then it happens. Subaru discovers his gift and the role he has to play in his new world.

The story shifts gears in ways you could not possibly expect. I refuse to tell you more about this show. You have to discover the story for yourself. It is more rewarding that way.

This is what you have to understand about RE: Zero. It has a light-hearted tone. But once it gets dark, it is simply merciless. The characters are shockingly likable, which is why their trials are so moving.

I am in awe of the well-paced, masterfully designed story arcs, especially the third one – what they did to Subaru was simply cruel. Each episode draws out the tension for so long that the anticipation leaves your stomach in knots.

Once I started watching, I could not stop. Subaru is like no other isekai protagonists. His actions are driven by his obsession with another protagonist rather than any larger-than-life ambitions.

You are driven to applaud his triumphs because his opponents are so sinister. Betelgeuse is a brilliant villain. The supporting cast is just as amazing. Every character has a significant role to play.

Re: Zero doesn’t feel like it wastes anything. Ever since it was released in 2016, I have heard nothing but good things. It justifies all the praise it gets. I have no intention of watching season 2, not until it ends.

This is one anime that should be binged. Otherwise, the waiting will kill you.