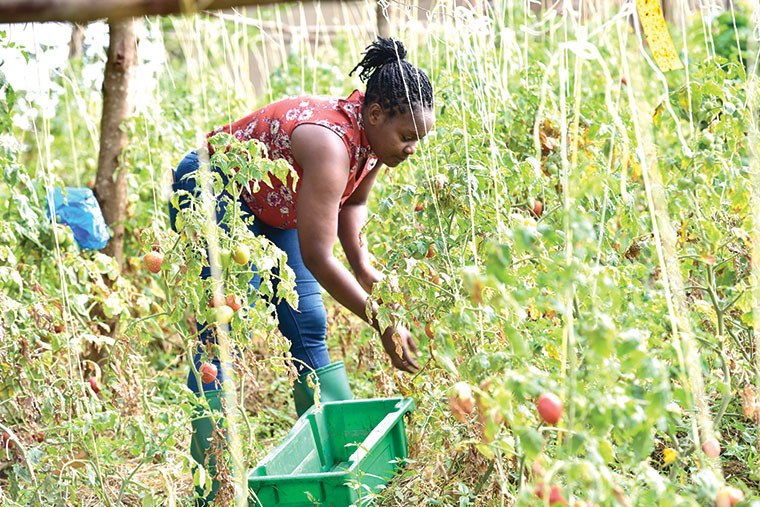 Sandra Nabasirye in her garden

On a very windy hill of Nabbingo about 18km from Kampala sits a one-acre piece of land on which Sandra Nabasirye aka Slay Farmer has set up home and a tomato garden; it is where she also stays with her six-year-old son and two-year-old daughter.

All around, tomato plants are propped up on poles with small ropes that help the soft-stalk plants stay off the ground. Most of Nabasirye’s tomatoes are ripe and ready for harvest and in two days’ time, she says, she will pick some for the market.

Nabasirye, 28, is a teacher, who earned her bachelor’s degree in Education from Makerere University but swapped the chalk for a hoe just one year into her profession. She has become quite the social media celebrity for her different portrayal of farming.

Like her social media name (Slay Farmer) suggests, she is not your average farmer; if you expect drab clothes, bad hair and broken nails, Nabasirye often comes packaged in ripped jeans, short bondage dresses, fancy gumboots, good hair and even a touch of makeup when she feels like it. She has made it clear she wants to inspire Kampala’s ‘slay queens’ to dabble in farming too.

After her graduation in 2015, Nabasirye taught History and Religious Studies at Midland High School and Trinity College Nabbingo, but in 2016 she threw in the towel and ventured into personal business mainly selling clothes in her boutique.

“I always had a business mind and however much I had passion for teaching, I wanted to do something of my own. At campus, I used to hawk clothes, selling them to fellow students in order to make some extra cash,” Nabasirye tells The Observer.

Nabasirye also had a strong passion for politics at university, having been the speaker for School of Education and the first female president of the College of Education and External Studies. She also did a lot of activism, but due to personal events immediately after university, she was forced to drop her political ambitions.

Nabasirye, like many millennials, now takes full advantage of her Twitter and Facebook popularity, saying the platforms have helped change the mindset of many young people about agriculture. Some have even gone to her for some skills. She is out to show people that farming can be fun, fashionable and enjoyable.

When Nabasirye settled in Nabbingo, her boutique business was not doing as expected and she had decided to focus on motherhood having welcomed her second child.

But soon, she realized she and her neighbours had a hard time accessing vegetables; one needed to go to the trading centre or send a boda boda rider to pick some, and this sparked off the idea of growing her own tomatoes at home.

“I got an idea of growing like 20 plants of vegetables in my compound so that my neighbours could buy from me, but I had no knowledge about agriculture, particularly growing tomatoes,” she says.

Many discouraged her, telling her how tomato growing was a risky venture especially for a person with no agricultural background and knowledge. But because she had made up her mind, she began looking for tomato growers for advice.

“My brother connected me to his friend Samuel Kamya who was already growing tomatoes who taught me all the necessary steps to set up my tomato garden. All this teaching would be done over the phone and we never met in person – not until my first harvest. I also supplemented his teachings with research from the internet and YouTube,” Nabasirye says.

Her initial plan was to start with only 20 tomato plants, but Nabasirye decided to go all in and covered the entire garden space – close to an acre. Because of her little knowledge in agriculture, she even planted excess to what the space she had could take.

Her beginning was tough because she never budgeted how many costs she would incur, for fear of being discouraged that she was making a huge investment where she was unlikely to make profits. She decided to invest blindly.

Besides, she also ended up planting in the dry season and this called for constant watering, which, coupled with the inadequate labour, became an uphill task.

“With two workers I had then, we would water the entire garden from 5am up to 8am and the following day we could water in the evening from 4pm up to 11pm in the night. We would do about 40 jerry cans each. It was really difficult, but I was so determined and I had many [naysayers] that I wanted to disprove,” she says.

Nabasirye grins when she remembers her first harvest in May 2019 after three months of hard work. 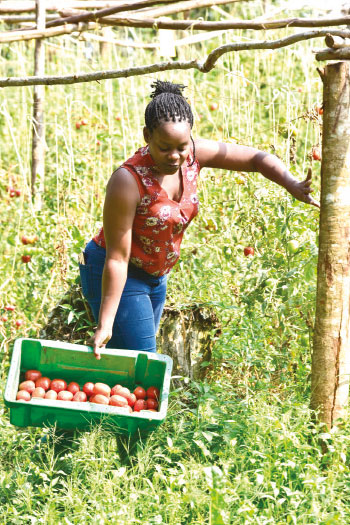 “It was a bounty harvest; the tomatoes were many and all looking juicy. It was overwhelming and I was so proud of myself. To make things better, tomatoes were scarce at that time and so the prices were really high,” Nabasirye says.

On top of tomatoes, Nabasirye has also added green pepper, lettuce, broccoli, eggplants and spinach to her garden, and since these take only two months to mature – a month less than tomatoes – they help bring in extra income and meet her family needs as she awaits her tomatoes.

The first customers for Nabasirye’s tomatoes are her neighbours who are lucky to buy straight from the farm. She also sells to vendors in neighbouring markets of Nabbingo, Kitemu, Kyengera, Busega, as well as Kalerwe and Owino.

The vendors pick up the tomatoes at the farm; sometimes Nabasirye makes deliveries depending on orders. She also supplies nearby schools and restaurants. Nabasirye says she had to go out and look for market for her produce.

“I moved from stall to stall in different markets informing them of my upcoming harvest and when the time came, I sold to them,” she says.

“The market is now flooded because those who used to export are no longer doing so and we are all competing for the small home market, yet there has been mass production. Even some places we used to supply to like restaurants and schools have been closed; so, this season, we are not smiling, although the harvests have been good,” Nabasirye says.

After hearing about her success story, many people started flocking to Nabasirye’s garden seeking knowledge on how to grow tomatoes. This prompted Nabasirye in 2019 to form an initiative, Santexie Agri Initiative Ltd, through which she could teach her fellow young people the skills of agriculture.

“People had started coming here at the farm for training and when they later told me that the knowledge I had shared with them had helped them start their own farms, it gave me an idea of starting up an initiative which can bring us together as young people and share knowledge and skills on how we can make our lives better,” Nabasirye says.

Being a trained teacher, this is also her way of channeling her profession though her passion, and she has so far trained about 40 young people who have set up their own farms.

For one to join the initiative, they have to have a passion for agriculture and then get in touch with Nabasirye who is the executive director, or any other team leader for them to get registered and become members.

The first achievement Nabasirye has reaped from farming is recognition and becoming an inspiration to many young people, something she believes would have been hard, had she remained in the classroom.

“I always wanted to do something beneficial for my community and I am proud that I have given out knowledge that people have implemented to better their lives. I always feel pleasured when someone calls me telling me how successful their farming has turned out because of the advice I gave them,” says Nabasirye.

The money she makes out of her produce is also way above the salary earned by a teacher, with capability of earning Shs 1m weekly on a good harvest. Nabasirye has also changed the mindset of her neighbours who did not think they could do agriculture in small spaces they own; she has taught them how to utilize and put any space to good use.

She has also become an employer, now with three permanent employees and other casual labourers during busy seasons such as weeding, spraying and harvesting. All these are youth from her community who now earn a living from her garden.

Being a young female, Nabasirye has faced a lot of discrimination and despise especially when it comes to bargaining for the prices and looking for market.

“When you go to markets, you find that the prices they want you to sell to them are lower than what they give to a man. They also constantly tell me how this is a man’s job and doubt whether I can be able to yield good results. Many women have also told me how their husbands have discouraged them from farming,” Nabasirye expresses her frustration.

Being in a semi-urban area has made it difficult for Nabasirye to get reliable cheap labour for her farm work. That aside, there are a lot of fake and sub-standard agricultural inputs on the market such as fertilizers, seeds, pesticides and sprayers, yet they are expensive, which eats into farmers’ profits.

Nabasirye appeals to the government to provide funding to farmers most especially when it come to start up capital, because many would like to join the sector but it needs a lot of funds, which discourages them.

“I have trained many people who would have loved to start farming but they are often discouraged by the lack of funds to start. The available agricultural loans for startup farmers are not easily accessible and they require a lot of security, which the youth do not have,” Nabasirye adds.

Nabasirye’s farm is close to just one acre, but she plans to expand to at least five acres so that she can grow in phases and have constant production.

“To earn much from tomatoes, you have to grow them in phases such that every month you have a nursery bed, flowering stage, fruiting stage or harvesting. This makes you not wait for another three-month cycle in order to earn some money and this can be possible on a bigger piece of land,” she says.

Nabasirye hopes to turn the current farm into a model farm where she uses it only to train people about tomato growing and also set up a greenhouse such that the model farm has both an open field and a greenhouse for her learners to have an option of the type of farming they want to do.

She also wants to expand her organization, Santexie Agri Initiative Ltd, to become an agriculture-training centre, because her vision is for every woman to at least have the capability of growing vegetables from her home even if not commercially, but for home consumption.

“I can only make that vision come true by training many people to do what I do and not only by growing tomatoes but also other crops like matoke, irish potatoes, coffee… as long as someone has something they are doing,” says Nabasirye.

Nabasirye now plans to add value to her tomatoes by processing them to make paste, juice and other products and also improving on the packaging and branding.

She advises young women to embrace farming, and not despise it as a job for the uneducated or the old and villagers, because it is a business venture that never stalls since people need food all the time.