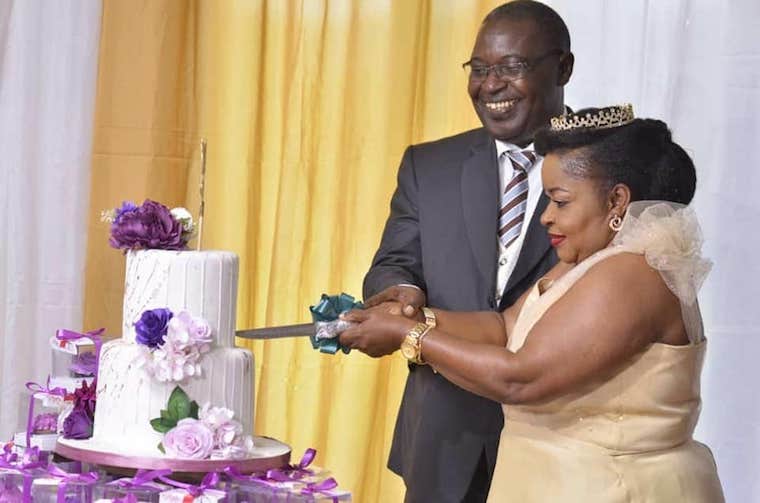 The Mugangas cut cake at the weekend celebration

On July 22, 1995, Christopher Muganga Kagolo and Afrigo band’s Joanita Kawalya got married amid huge fanfare. Last weekend, the couple marked their golden jubilee in a simple celebration at Grand Global hotel, attended by a few family members and friends.

Muganga is a curriculum specialist at the National Curriculum Development Centre (NCDC) while Kawalya is famous for hits such as Jim, Mp’eddembe, Ssemuwemba, Julie, Vincent and many more. She is also the daughter of the legendary Eclas Kawalya. The couple talked to David Lumu.

Did you ever imagine your union would last this long?

Christopher: To be sincere, all I thought about at the time was the wedding. I was the luckiest man in Uganda when I wedded Joanita.

Joanita: It was never in my mind. Most of my focus was to get the event done in the most beautiful way and I spent a lot of time asking our wedding coordinator, Dr Gordon Sematiko, whether everything was fine. This is the only time I felt a lot of pressure on stage because I had to perform my songs, Jim and Mundeke.

What is so memorable about your wedding?

Joanita: I was so surprised to learn that some patients at Lubaga hospital left their wards to come and witness the wedding in Lubaga cathedral. The media had already hyped the wedding for weeks; so, seeing several high-profile individuals in attendance was quite fulfilling.

Christopher: Put aside the glamour of the event in church and later at Lugogo indoor stadium. What blew my mind that day were mostly people who came eager to see the kind of man who had wedded Joanita. Most of them had never even heard about me. They had never seen me at Afrigo shows because I always kept a low profile. I even eavesdropped a debate about whether the marriage would last, given that music stars hardly keep their marriages. 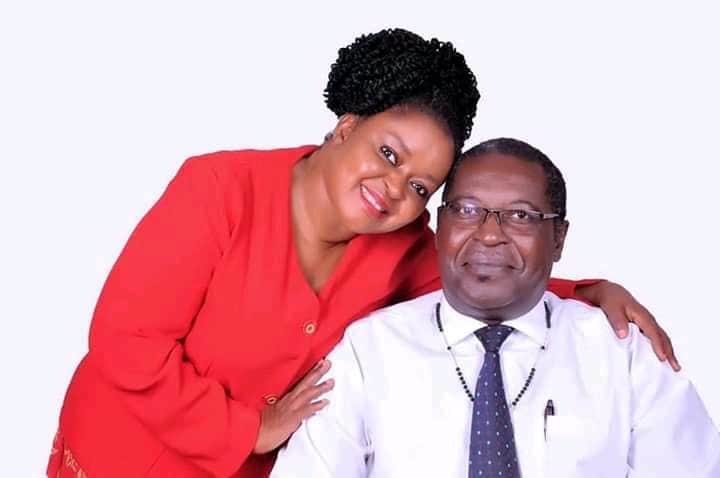 What is it like to be called ‘Joanita’s husband’?

Christopher: Ho! This is perhaps the most uncomfortable thing in our marriage. Do you know that to this day, some friends do not even know my name but refer to me as Joanita Kawalya’s husband? It can really be embarrassing sometimes. Even at work, some colleagues prefer to call me Joanita’s hubby and I always caution them about my credentials. The funniest bit is when some people call me Mr Kawalya.

Academia and music are quite detached; how have you kept the harmony?

Christopher: In my profession, there are barriers I cannot cross. I’m a public servant; so, I tread very carefully in all my ways. Our families have also played a big part to keep us glued, because we have an obligation to be role models.

Joanita: Getting married was the best thing I did at the time because it saved me from the temptations that come with stardom. My marriage has instilled limits to everything I do; what I sing, how I dress or even what I say because my first role model is Mr Muganga.

What has changed between then and now?

Christopher: Things change, of course. When we got married, we were free souls. She was very outspoken. At home, we used to argue a lot but today, she is the humble one and I’m the vocal one. We only debate about issues. We have an obligation to be role models for our children.

Joanita: The longer we have stayed together, some things have been reversed. He was the doting dad to the children but these days, they run to me first.

In 25 years, what is your fondest memory?

Joanita: I move a lot when I go to perform, often leaving him to take care of the children. I’m glad he has been understanding. I remember after the birth of our first born [Wangi], he would come to my shows and stay in the car nursing the baby. Between performances, I would steal a few minutes to join him and breastfeed the baby.

What is it like spending most public holidays and weekends apart?

Christopher: Honestly, I went into the marriage expecting this scenario. Luckily, it was a norm for my family to converge in the village; so, it didn’t really hurt me when Joanita travelled to perform with Afrigo. With time, however, most of the elders passed on; so, the village gatherings became boring and that is when the loneliness set in.

Besides, this is a union I entered with dedication and I expected her to continue with her career. It has taught me not to be a prisoner of my thoughts.

Joanita: Music is my calling and much as I miss being with the family while on duty, it doesn’t affect me a lot.

How do the children appreciate your different professions and lifestyles?

Christopher: We agreed to push them to my side of profession but, surprisingly, they confide more in their mother because I ask them many questions.

Joanita: They support me a lot and even attend my performances. However, they also tease us a lot. In times of tension, they put up a spirited effort to remind us of the vows we made in church.

What is your biggest bond?

Christopher: Respect. We fully appreciate each other. Also, she gives people joy through music and counseling. She provides a warm heart to all relatives and friends.

Joanita: We basically complement each other well in all aspects of life. I’m glad he let me retain my music career and we disproved many doubters who thought my career would be over after marriage. So, seeing each flourish is a blessing.

How do you overcome misunderstandings?

Christopher: I learnt from my father never to keep grudges, especially with a woman. I move on quickly, even if it means stepping away for some time.

Joanita: I had a tendency of acting and informing him later, which used to greatly disturb him but we talked about it and got to understand each other. We are a prayerful family and resort to God each time there is a disagreement.

Joanita: I’m glad we have given our children the best education and opportunities. We’ve also looked after many other children. But in five years, we expect the children to start their own lives and we will be back to where we started from. We plan to visit people and places and catch up on the things we have missed while raising our children.

How does the home function?

Joanita: I’m always the boss at home and my presence has to be felt. I’m the shortest at home and it puts me off when I cannot reach things in the kitchen.

It all started at the Institute of Teacher Education Kyambogo (ITEK),  where both were pursuing diplomas in Education.

“I already knew Joanita was a musician. Even after graduating, I followed her up,” recalls Christopher. “Communication was a problem because I was staying in Mityana, while she was in Bulange…I knew I faced stiff competition to win her heart. She tried to be like any other student, but everyone knew she was a singer and also her famous father.”

The turning point came when Joanita travelled to see Christopher in Mityana. “The Education ministry had released placements for teachers but I realized Chris had not picked his…I knew he didn’t know about it; so, I boarded a UTC bus to Mityana to inform him. Luckily, he had told me the village where he hails from and I didn’t find much trouble to locate him,” says Joanita.

“In fact, when I arrived, they had to call him from the garden where he was digging.”

Christopher recalls that when his sister saw Joanita, she immediately remarked that he had hit a jackpot and needed to do everything to win over the daughter of a legend.

Christopher was initially designated to teach in Mityana but the then head teacher of Makerere College School persuaded him to join the school. That meant moving back to Kampala to be closer to Joanita, who was teaching at Lubiri SS.

In later years, as Joanita’s music career shot through the roof, their romance also blossomed, although Christopher preferred to stay in the background, and still does.