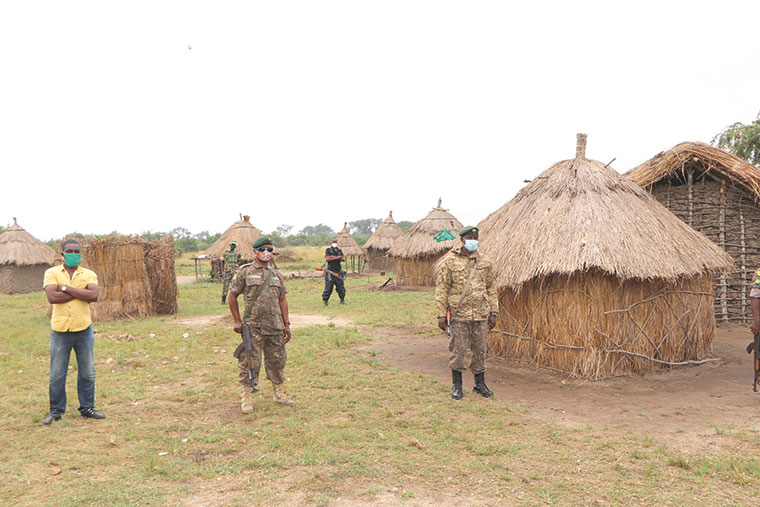 Some of the rangers outside their semi-permanent structures

Despite their incredibly dangerous job to protect the country’s top foreign exchange source – tourism – rangers hardly discuss their hazardous working conditions. They put their lives at risk to save wildlife and attract more tourists to national parks and reserves.

In the Ishasha sector of Queen Elizabeth national park, as tourists retire to lavish cottages and safari lodges, rangers settle for tents and small semi-permanent mud- and-wattle bandas. When The Observer visited the Simama ranger outpost last week, rangers in the Ishasha area had a reason to smile after they received a new 12-unit permanent accommodation block with modern kitchens and toilets.

The Shs 325m ranger post was funded by the European Union and supervised by the International Fund for Animal Welfare (IFAW) in collaboration with the International Union for Conservation of Nature Netherlands (IUCN NL). The outpost, constructed at Lake Edward flats bordering Virunga national park in the DR Congo, is expected to be a game changer in wildlife and tourists’ security.

“Ishasha is famous for its unique tree-climbing lions, but very few of them remain – I am told less than 30 – if they are not protected, they will be no more and this area will become a scarcely attracting appendix of the Queen Elizabeth national park. I am sure we all do not want this to happen,” Pacifici said.

In Uganda, tourism is 90 per cent natural resources based, thanks to the unique and rich biodiversity. Wildlife, the main tourist attraction, is still under threat even in protected areas due to human-animal conflict.

In the midst of the Covid-19 pandemic, Pacifici said, it is crucial more than ever before to conserve and protect “what this blessed country has, to keep staff, instruments and procedures ready to restart and to make plans for the future not just to be back to where we were but to go far beyond that”.

In Queen Elizabeth, the 12-unit block brings the total permanent accommodation facilities to 344 units. This is out of the 450 units required to ensure that all staff members are reasonably accommodated. Uganda Wildlife Authority (UWA) executive director, Sam Mwandha, said such decent accommodation plays a vital role in motivating rangers.

Before the pandemic, UWA hoped to construct at least 300 units annually from internally-generated funds so that by 2025 every staff entitled to accommodation is well accommodated. Unfortunately, this plan is set for review after the nationwide lockdown greatly affected the tourism sector.

Beside decent accommodation, Mwandha said rangers are also grappling with inadequate field gear such as camping equipment, vehicles, data collection equipment such as cameras, smartphones and GPS to enhance monitoring and prevent illegal activities in the parks.

“When it rains three days in a row, if you don’t have a 4WD vehicle, you can’t go through the Ishasha sector. We want to ensure that our rangers can easily patrol the park despite the weather conditions to counter illegal activities like poaching,” he said.

The UWA officer in-charge of the Ishasha sector, Gerald Abitegeka, told The Observer the lockdown has seen an increase in poaching activities. Animals at high risk including elephants, hippos, buffalos and kobs are poached using wire snares, traps and spears by people living in neighbouring districts of Kanungu and Rukungiri.

“People came to the village and some are idle and disorderly. Due to poverty and starvation, people think animals are free of charge,” Abitegeka said.

In the DR Congo – located just 1.5 kilometers from Simama ranger outpost – poachers use Ishasha as a transit and return to their villages in Uganda.

According to article 71 of the Uganda Wildlife Act, 2019, any person who, without a permit, takes, hunts, molests or reduces into possession protected specimen; or is found in possession of, sells, buys, transfers or accepts transfer of protected specimen commits an offence.

For now, elephants remain at more risk of being poached since they easily move into communities and destroy gardens. UWA has so far electrically fenced up to 40km of areas near communities but surveyed 80km that require urgent fencing since it is labour-intensive and risky for rangers to guard people’s gardens from elephants.