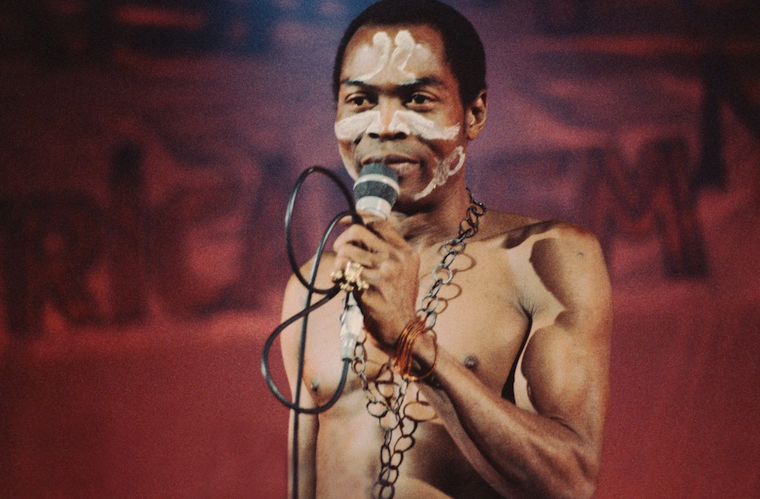 The 20th century was surely a busy one in Africa, a continent that was battling for independence from Europeans.  And this battle surely led to the rise of prominent musicians whose tunes brought hope to Africans that they would eventually reach the shore called “Independence”.

Today we revisit some of the great names that started as fighters for equality but later turned out to be the foundation of the ever-growing music industry on the continent.

The African continent is one with lots of talent, but here are some of the men and women that were a force to reckon with.

Fela Anikulapo Kuti, professionally known as Fela Kuti, or simply Fela, was born on October 15, 1938 to Funmilayo and Reverend Ransome-Kuti in Abeokuta, Nigeria.

Beginning in the 1960s, Kuti pioneered his own unique style of music called Afrobeat. Rebelling against oppressive regimes through his music came at a heavy cost.

Kuti was arrested 200 times and endured numerous beatings, but continued to write political lyrics, producing 50 albums before he died on August 2, 1997, in Lagos, Nigeria.

A musical and cultural icon in his native Zimbabwe, Oliver “Tuku” Mtukudzi’s songs reflected the daily life and struggles of his homeland by blending a number of southern African music traditions including mbira, mbaqanga, jit, and the traditional drumming styles of the Korekore to create a distinctive style that his fans affectionately dubbed “Tuku music.”

An inventive guitarist and passionate singer, Mtukudzi was also an astonishingly prolific recording artiste, releasing 67 albums during his four-decade career.

Mtukudzi, who also shared his gift with Ugandans in live shows as recent as 2017, was born on September 22, 1952 to Samson and Oliver Mtukudzi in Highfield, Harare, Zimbabwe and breathed his last on January 23, 2019. Todii, his most-recognised song, was a great hit with Ugandans.

Lucky Philip Dube was born in Ermelo, formerly part of the Eastern Transvaal, now Mpumalanga, on August 3, 1964. His parents separated before his birth, and he was raised by his mother, who named him Lucky because she considered his birth fortunate after a number of failed pregnancies.

Along with his two siblings, Thandi and Patrick, Dube spent much of his childhood with his grandmother, Sarah, while his mother relocated to work. In a 1999 interview, he described his grandmother as “his greatest love,” who “multiplied many things to bring up this responsible individual that I am today”.

He recorded 22 albums in Zulu, English and Afrikaans in a 25-year period and was South Africa’s best and biggest-selling reggae artiste. Dube was murdered in the Johannesburg suburb of Rossetenville on the evening of October 18, 2007 during a tragic carjacking.

He was widely mourned, even in Uganda where his death was announced on the front page of the day’s newspapers, because of how popular he was on the continent. Lucky Dube held numerous shows in Kampala and once said he considered himself Ugandan too.

His songs to this day still reign on radio with his beautifully-crafted messages on love, freedom and equality.

The South African-born singer who became known as Mama Afrika, is one of the world’s most prominent black African performers of the 20th century, associated with musical genres including Afropop, jazz, marabi and world music. Like most South African artistes of the century, she was an advocate against apartheid and the white-minority government in South Africa.

With songs such as Pata Pata (1967), Malaika (1972) and A Luta Continua (1990), she was a household name even as much of her career was developed while in exile in the USA, Guinea, Belgium and France.

Makeba mixed her music with activism not just for her country South Africa, but also for African independence and racial equality in the USA.

One of her very last performances was at the Warid Kampala Jazz festival in October 2008, a month before her death. In November, after a 30-minutes gig in Italy, the artiste who was briefly married to fellow South African great Hugh Masekela, collapsed as she left the stage and later died in hospital.

Masekela, who died two years ago in Johannesburg South Africa, was known as ‘the father of South African jazz’, but also influenced a generation of trumpeters across the continent, including Uganda’s own Isaiah Katumwa.

Masekela performed multiple times in Kampala and, like many of his contemporaries that were purified in the apartheid furnace, he was a voice of liberation and independence.

Philly Bongoley Lutaaya (October 19, 1951 to December 15, 1989) was a Ugandan musician who was the first prominent Ugandan to give a human face to HIV/Aids.

Before dying of Aids, Lutaaya spent his remaining healthy time writing songs about love, his battle with HIV and released his last album Alone and Frightened, including his famous song Alone, which has since been made an anthem for people living with HIV/Aids.

Lutaaya became popular in the 1980s after he settled in Stockholm, Sweden and released his classic album, Born In Africa that to date remains outstanding in lyrical and sound quality. Lutaaya also released a Christmas album that rivals Boney M’s popularity during the festive season in Uganda.

However, it is mainly his fight against HIV/Aids that puts him on this list, as an African musician that fought a scary pandemic with his fame and soothing voice.

Ayodeji Ibrahim Balogun (born July 16, 1990), known professionally as Wizkid is a Nigerian singer and songwriter. He began recording music at the age of 11 and managed to release a collaborative album with the Glorious Five, a group he and a couple of his church friends formed.

Wizkid signed a record deal with Empire Mates Entertainment (E.M.E) in 2009. He rose to prominence after releasing Holla at Your Boy, the lead single from his debut studio album Superstar (2011).

This is a controversial mention due to the fact that he is a 21st century musician but his global achievements put him up there as the most successful musician from the continent.