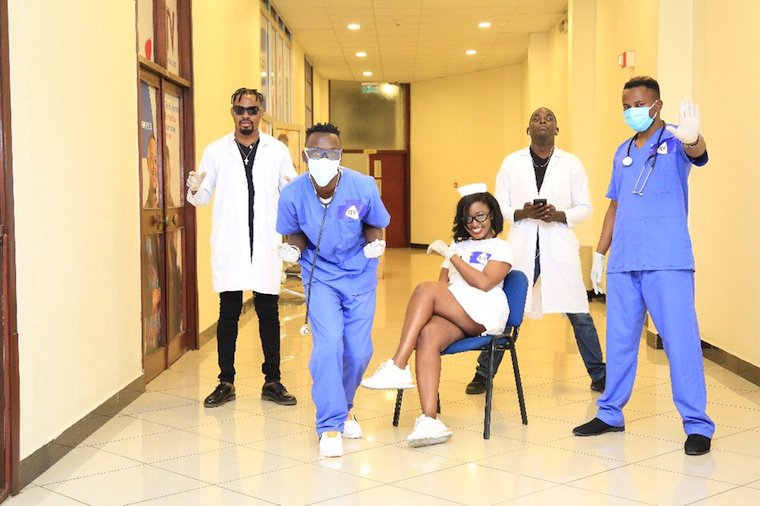 Those were the broadcast stars of the late 1990s and early 2000s. I was particularly obsessed with Kamba, who presented Sanyu FM’s Intimate Connection on Sundays, an emotional ‘ask auntie’ format of show that came with a great music selection.

According to Kampala Express, Kamba’s fame was so much that she could not go anywhere in Kampala without being instantly recognized, a far cry from the quiet life she now leads in the UK.

The same applied for most of the FM radio presenters at the time, despite the medium coming to Uganda in 1993 with Sanyu FM and later Capital FM. Before that, Radio Uganda and Uganda Television (now both under the Uganda Broadcasting Corporation stable) had been the sole broadcast entertainment.

Ugandans moved from waiting for the TV sets to come to life at 6pm daily up to midnight, to this novel broadcast format that offered clear signal, great music variety, cool, young presenters, and all-day, all-night entertainment; Ugandans from border to border were hooked to radio more than ever.

Even when that first generation of FM presenters retired, died, toned down or otherwise moved on, FM radio remained a major creator of celebrities, with a new crop of presenters such as Crystal Newman, Dr Mitch, James Onen (Fat Boy) and a host of others more so on Luganda channels such as CBS FM’s Kaliisoliiso, who drove the agenda on fashion, music, politics and popular culture for ages 18 and older.

So, when did the current change of guards even happen? For today, strangely, especially in urban areas, TV is all the rage. Enter a salon, gym or barbershop, and the centre of attraction hangs colourfully on the wall, influencing debate between clients and service providers.

“Proliferation makes an audience lose interest,” respected media consultant Dr Joel Isabirye told The Observer in a weekend interview. “There are so many players in radio that people do not know whom to follow anymore. Even someone who is not well-developed will appear. Back in the day, it was [mainly] Sanyu and Capital.”

There are 292 licensed FM radio stations in Uganda, according to Uganda Communications Commission data. In a recently released study on coronavirus- related changes in daily life, GeoPoll found radio was still Uganda’s leading information source at 44 per cent of the respondents, compared to TV’s 34 per cent.

While Isabirye agrees with the pollster that radio is king thanks to its reign in the countryside, there is still no doubt that “television has taken away audiences from radio. Even a kindergarten child sees it”.

Isabirye said radio still leads TV in national polls only because there has been slower penetration of TV in rural areas due to the cost of the set and other factors such as rural electrification; so, people in villages can still listen to radio on their ‘kabiriiti’ phones.

But in urban areas, specifically Kampala, Isabirye said, 49 per cent of the people listen to radio, compared to 61 per cent who watch TV. And this has propelled many TV presenters to stardom. Faces such as Lynda Dane, Douglas Lwanga, MC Kats and various newscasters have become household names even as radio presenters fade into oblivion.

In the last few weeks, NBS TV and NTV have been battling it out on Fridays and Saturdays over who has more viewers due to their new segments that bring the nightclub to the viewers’ sitting rooms. #NBSKatchUp and #NtvDanceParty have become trending hashtags on social media, the moment the weekend rolls around.

And the faces behind the programmes have also become celebrities, thanks to the third dynamic that the Mawadris and Ndawulas did not have during their FM days: social media. TV stations and their presenters have mastered the art of marketing their brands online, exploring a multimedia, interactive platform that has changed media as we knew it.

Still, I had to ask Isabirye about this now- public NBS-NTV rivalry. “The NBS/NTV rivalry has always been there. NBS takes its things very seriously, while NTV is more laidback and not as aggressive as NBS. You have to also remember that NBS took most of its presenters from NTV,” Isabirye said.

“NBS has the hype, NTV has the finesse. I have been a consultant on NBS before, and an interviewee on NTV. The level of preparation at NTV helped me understand why there is a lot of professionalism in what they do.”

According to GeoPoll, NBS and NTV had the highest increase in TV viewership during this lockdown period (according to April statistics) - 132,000 and 107,000, respectively – among the pollster’s top 10 most viewed TV channels nationally. UBC gained 8,000 viewers, Al Jazeera gained 59,000.

Among the top 10 stations in Kampala during the same period, CBS Radio Buganda increased by three per cent market share, whereas Galaxy FM declined by six per cent. While GeoPoll says Capital FM’s Breakfast Crew is still wildly popular (the station also gained a two per cent market share in the polled period just like Bukedde FM) Sanyu, Uganda’s pioneer FM station, was conspicuously absent on the pollster’s list of top 10 radio stations. That says a lot about how times have changed.

“Even in print media [things have changed]; there was a time names like Kevin Ogen Aliro [RIP], Charles Onyango Obbo, influenced every debate [going by what they wrote]. Now, nobody cares about the byline,” Isabirye summed it up perfectly.

Isabirye does not see it as a cause to worry the Ugandan industry, per se; after all, the change is not unique to Uganda. It is happening in the USA, UK and other countries as well. Internet and social media are at the centre of all this industrial turmoil, forcing legacy media to adjust fast and compete fiercely to remain relevant, or die in the stampede.

0 #1 Gaiko 2020-05-25 10:25
Those names mentioned above are serious media personalities, but you forgot to mention one Super Name, DJ Carlos, the Late Date night Presenter who Later Crossed to KFM.

Though his status declined Massively at KFM because of slight change of programmes.
Report to administrator