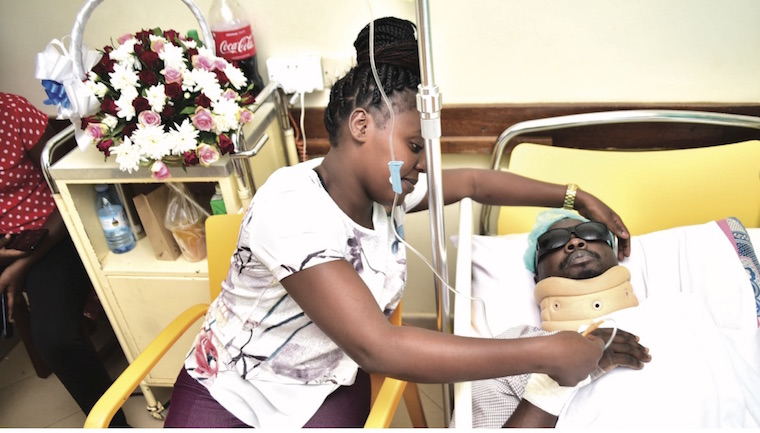 Bridget Namirembe, wife to MP Zaake, attends to him in Lubaga hospital

Every time Mityana Municipality member of parliament Francis Zaake Butebi has a run-in with security, the bloody price he pays does not stop at him; it permeates to the people he loves and lives with.

One of those people is Bridget Ndagire Namirembe, his wife of more than six years. The other is Mukungu John Dallan Zaake, the six-year-old son the couple shares. When Zaake is in hospital, Namirembe too is in hospital looking after him. For the days he stays off radar in the hands of security, it is Namirembe who spends sleepless nights praying for his safety.

Zaake, was in April arrested from his home in Buswabulongo in Mityana municipality on suspicion that he was distributing food to his constituents, contrary to President Yoweri Museveni’s orders. When the president declared a nationwide lockdown in March, constituents begging for help deluged their parliamentary representatives. They wanted food. Those who could not call would walk to the MPs’ homes and refuse to leave without food.

“I had bought items including rice and sugar with an intention of helping some very needy people in my constituency. This was after many of them kept coming to my home to ask for help. I could not stand starving mothers and their children camping outside my gate every day for help. I had to find a way of helping them without compromising public health in these coronavirus times,” Zaake told The Observer at Lubaga hospital last Wednesday.

In a statement he later released, Zaake said he gave the food packages to boda boda riders to deliver to some people, but was surprised when security forces raided his home and allegedly violently arrested him. For days, Namirembe, like most Ugandans, had no idea where her husband was being held, until he was brought to Iran Uganda hospital in Naguru with signs of torture.

By the time he was produced in the Mityana Magistrate’s court eight days after his arrest, many Ugandans were in disbelief over the state he was in. Zaake, who was bare-chested and in shorts, was carried into the courtroom on a stretcher and was unable to open his eyes. He had scars on the face, arms, torso, the legs and other body parts.

In the circumstances, he was unable to take plea. The magistrate instead ordered that he be taken to hospital for medical attention. In all this, one stoic face hovered by the legislator’s side: his wife’s.

The police and government have since issued a statement saying the MP’s torture symptoms were self-inflicted, denying any brutality during his detention. This is the fourth time in Zaake’s four-year political journey that he has been subjected to torture that has left him hospitalized.

The first time was during the age limit brouhaha in parliament in 2017, when the NRM government was pushing for an amendment to the constitution that would allow President Museveni to stand for reelection even after clocking the mandatory 75-year-old cap. Despite the drama, the kung fu antics atop the speaker’s table and the chaos, the amendment went through.

In its wake, some MPs including Zaake and Mukono municipality legislator Betty Nambooze Bakireke suffered serious injuries that landed them in hospital. Zaake was also nearly killed in 2018 during the Arua municipality by-election. It was alleged then that Zaake, Robert Kyagulanyi Ssentamu together with other supporters of eventual winner Kassiano Wadri, had stoned the president’s convoy, breaking one of the back windows.

The jury is still out on what actually happened that day, but what is public knowledge is that again Zaake and this time, Kyagulanyi, turned up looking worse for wear following their arrests and detention. The third time was when he was accused of flouting his bond conditions.

At Lubaga hospital, again at Zaake’s bedside was Namirembe. When The Observer first interviewed Zaake in January 2018, he said he had a companion whom he wished not to talk about in the media because they both wanted her to have her privacy.

“I don’t want to talk about her in the media. I want her to have her privacy, she isn’t a politician,” Zaake told The Observer then.

His stance on the subject has not changed, but the political season will not allow Namirembe to stay in the shadows, as her husband has become one of the most recognized MPs – and not necessarily for his submissions on the floor of parliament. Every time Zaake is beaten and left for dead, she becomes his spokesperson, updating the media on how he is faring.

“There is no way you guys can come here and I refuse to tell you how he is doing. I don’t like doing it, he also doesn’t want me to do it, but well, what other options do we have?” Namirembe said.

When I asked what goes through her head every time she witnesses or is called as her husband is whisked to a waiting security vehicle, she paused for a while, then looked at him as she talked: “Well, he does not invite what happens to him. I wonder why they like doing this to him. There is nothing really out of the ordinary that he does that other opposition MPs don’t do, that warrants his torture.”

Doesn’t she feel he should slow down, at least for his young family, parents and those who care about him? “He swore never to disappoint the people of Mityana municipality and the country I think...”

However, Zaake cut her short, saying he felt uncomfortable with her discussing politics. He insisted that was his way of protecting her and his family. Is it working, though?

“We have been subjected to immense suffering every time they beat him. They should know that when you are beating Zaake, you are not only beating him alone but me his wife, children and parents. I really, passionately, despise those guys.” Namirembe added, every beating has left her stronger than the last one.

Writing on his Facebook page about his ordeal, Zaake said one of his tormentors allegedly asked Namirembe to dump him. In return, the operative would take her to meet the president to get money and live a happier life.

“At one point, my wife decided to speak to Mr Twesigye in Runyankore. She knows the language, having studied in Rukungiri district. He told her that he was very glad she is one of their own. He told her all sorts of things including telling her that he could take her to President Museveni so that she is given money to live a good life and leave this Muganda man alone,” Zaake wrote.

“In their heads money is everything. How do you even tell me such a thing? Who told them I’m not happy?” she said.

The damage is also felt by her son Mukungu. Every time his father does not come back home, he asks where he is. This time round before he could be given an answer, he watched him on TV in a sorry state. The six-year-old has reportedly also learnt to connect his father’s misery to the government in whose legislative estate he serves.

The couple said they know their lives took a turn the day Zaake joined politics, and there is no reboot button. Like Betty Nambooze’s husband Mr Bakireke, this is now Namirembe’s new normal.

Even with a neck brace and his eyes still struggling to see, Zaake was very protective of his wife and how much she could share with us about her personal life. But the one thing he could say was: “No amount of torture or threat will make me turn against my people.”