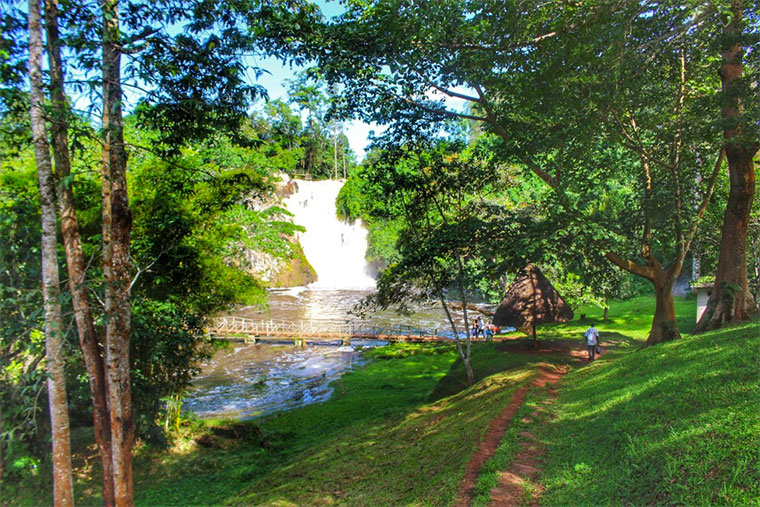 Memories of many Ugandans’ secondary school geography lessons are incomplete without that field trip to Ssezibwa falls in Buikwe district.

It was the highlight of many trips on the school truck to eastern Uganda, where the falls sliced through lush greenery and rocks, to plummet several feet below to continue downstream.

A nail-biting, rickety bridge a few meters from the start of the falls only made a trip to River Ssezibwa and its falls even the more adventurous, and soon, tour companies started taking tourists to the site. It helps that the falls are also bordered by nice grounds, ideal for picnics and quiet getaways.

But now uncontrolled witchcraft practices at Ssezibwa falls are discouraging tourists from visiting the falls, despite the serene and beautiful scenery. Would-be local tourists are increasingly afraid of being mistaken for sorcerers, since the site has become a magnet for witchdoctors seeking to perform their rituals.

According to legend, Ssezibwa was born of Nakangu Tebatesa, the wife of Nsubuga Ssebwato. It is alleged that Nakangu gave birth to twin rivers; namely, Wasswa alias Ssezibwa, and Kato alias Mubeya in Nyenga.

As a result of this legend, many witchdoctors flock to Ssezibwa falls with a number of their followers to perform rituals, especially those seeking for ‘blessings to conceive twins’.

They bring along sets of drums, local brew, fetishes and animals such as sheep, and goats for ritual sacrifice. The falls are close to caves and rocks, all favoured venues for traditionalists, at the expense of tourism. The most visited cave belongs to ‘Magogwe’, a big snake that legend says was born with a twin, human brother.

Janet Kajumba, a local guide at the falls, said the management of the place has a hard time convincing the witchdoctors and their groups to pay the Shs 5,000 entry fees to access the place, since they take it as a cultural site, and not a tourist site.

Kajumba notes that many people fear to spend time at the falls due to the constant ritual practices performed there. She explains that many local tourists reach the falls and decline to cross the bridge at Ssezibwa for the once-popular nature walks in the bamboo forest on the eastern bank, fearing the many fetishes now littering the place.

Ugandans are notoriously superstitious and a sizeable number still believes in the power of witchcraft. For a government promoting local tourism, this is a major setback to that initiative.

John Wasswa Muluuya, another local guide at the caves, says they have been involved in running battles with impostors who claim to receive visions to perform rituals in the place for so many years. He says given the mythical tales around the place, management is only interested in setting up the place to depict those legends without allowing impostors to use the same fables to rob people.

“I spend much of my time guiding people away from imposters who find their way into the place. Ssezibwa remains important in Buganda kingdom as it is believed to be the origin of one of the kabaka’s titles, Ssabalongo, which means head of all ssalongos (fathers of twins)”.

Derrick Mugoya, a resident of Mukono Central division, notes that Ssezibwa is one of the places with a cool environment for relaxation but the rituals performed there discourage many from visiting it regularly.

Elijah Mulembya Bogere, the Kyaggwe county head (Ssekiboobo), says the problem of witchdoctors invading cultural places is common at Buganda’s cultural sites, claiming they have received visions from their gods.

He acknowledged that the practice discourages tourism, saying they have come up with a method of training caretakers of cultural places, to look out for such impostors. Buganda has several cultural sites that are also tourist attractions, including the Kasubi royal tombs and different palaces. Bogere says they are targeting about 20 important sites, which explain the origins and behaviours of Baganda in Kyaggwe alone.

“The county together with the Mengo tourism department have started training people on the importance of cultural sites and how to manage them. We condemn quack acts that even involve human sacrifices,” the Ssekiboobo says.

+2 #1 Omusomesa 2020-02-24 03:10
This article reminds me of that area along Masaka road where we sacrificed our environment for a certain foreign firm (could also be called country).

In this case, let us first say that respect for faith is key to our national unity even if you do not believe.

And we have many faiths - one of them is the African faith(s) and beliefs. Ssezibwa is a cultural site that is important to those Ugandans that practice our African faiths. Ofcourse it will not be as sacred to Christians or Muslims (understably so).

Now I wonder, must our people sacrifice their beliefs and culture for tourism? Or can these legends and beliefs be added to the tourism guide and mark the place as sacred so that tourists treat it as such?
Report to administrator
+2 #2 Omusomesa 2020-02-24 03:27
The writer uses the term witch doctor which is not applicable in African faith but rather in witchcraft. That begs the question - Are these people African faith priests or witches ("witchdoctors")?

The term witch doctors was coined by white colonialists who did not understand African beliefs and ceremonies.

They wanted to discourage Africans from their beliefs so they came up with a "scary" and "deregatory" term - witch doctor. This term was initially promoted through missionary schools.

This is why I wonder - Are we sure these are witch doctors? Or are we still reeling from the lasting effects of colonialism and neo-colonialism? Is this still a case of whatever is African is wrong and whatever is foreign is good?
Report to administrator
+3 #3 Conservationist@hrt 2020-02-26 11:57
Thank you, @Omusomesa for your comments. I must confess, my friends & I visited Ssezibwa for the first time with the keen interest of seeing African traditional faith in practice.

The traditional religion itself is an attraction! Moreover, traditional practices can also be an avenue for "sacred" nature conservation.

Had it not been for the traditional faith, the site could probably have been taken over by some "investor".

Fixing the weak-looking bridge might make the place even more appealing.
Report to administrator