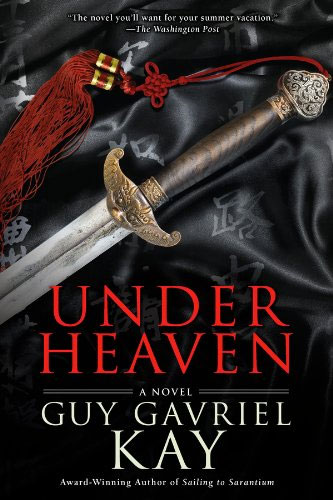 Years ago, the Empire of Kitan and the Taguran Empire fought a bitter war. Peace was finally made, but entire swaths of Kuala Nor at the Kitan/Taguran border are still littered with bodies.

As a young man, Shen Tai was looking at a promising career in the Kitan Capital. But then his father died. Now Shen Tai is in Kuala Nor, burying the dead. Each night, those he has yet to bury, rise. Their cries once terrified the former soldier. But now they drive him, giving the unassuming fellow impetus to perform a task that has made him a marvel among both Kitan and Taguran courts.

Shen Tai had no plans for the future, no real desire to return to the Xinan court with its political intrigue. But then an act of appreciation from the Taguran Princess changed everything.

I won’t say more about Under Heaven by Guy Gavriel Kay, except for the fact that the novel is set in a fictionalized version of Tang China. You have to read it yourself to fully appreciate it because it does an amazing job of keeping you hooked.

Under Heaven bored me to tears at the start. Then, it got really good. The first few chapters failed to hold my attention because they were too descriptive. Rather than kicking his story off with a bang and allowing you to discover China as you went along, Guy spent several pages explaining his setting, the people, culture and history, punctuating these dull lectures with equally uninteresting descriptions of Shen Tai’s macabre work.

I read boring novels all the time but those first few chapters of Under Heaven were actually putting me to sleep. But then a development occurred that forced Shen Tai to abandon his exile, and Under Heaven became infinitely intriguing. The author allows you to follow the protagonist’s travels through Kitan, elucidating on the events that turned Shen Tai into a fearsome foe with a mysterious reputation.

I loved every minute we spent actually interacting with Kitan culture rather than merely hearing about it. The protocols governing conversations between the citizens of Kitan were endlessly fascinating, and so was the reverence that certain figures enjoyed, the most prominent being the immortal poet and the Precious Consort.

I could have spent the entire novel in this section of the story. But I was also anticipating the political maneuvering that would unfold once we reached the Kitan capital. This is what the story promised; with Kay making an effort to lay the groundwork for the storm of conflict that was about to descend once Shen Tai entered the fray of Xinan politics.

But this is where the novel fails. Rather than delivering the intimate plotting, it chose to focus instead on the larger conflict surrounding Kitan as a whole. This did not appeal to me. I also hated the way the author chose to narrate the final chapters of this novel rather than keeping us in the thick of the action.

It was a disappointing – but not terrible – finale.