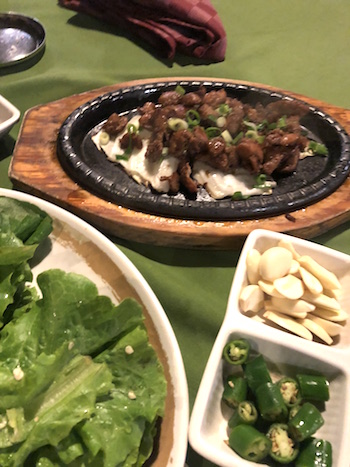 Eat their food wrongly and you will have one of the worst meals. Eat it right, and the previously huge portions appear like a drop in the ocean and tastefully different.

Welcome to Miso Garden in Kololo along Mabua road, the hidden gem of Korean cuisine away from Kampala’s hustle and bustle.

The laidback restaurant grows its own vegetables in their garden at the back. Initially, even the fresh lettuce tasted bitter, the garlic smelled annoyingly garlic while the ssamjang had a savory stale nutty taste. The highlight thus far was the steaming chicken bulgogi (thin marinated slices) barbecued over charcoal.

At this point, the bad reviews by Ugandan slay queens (socialites) seemed so right. Moreover it is such a pricey restaurant whose foods range between Shs 35,000 and 100,000.

“Sir, you’re eating the food the wrong way,” the waiter advised. “Put the chicken inside the leaf [lettuce], add green chilies and garlic and then [slather them] with ssamjang, wrap it up and take it in all at once, the taste will be very different.”

The taste was indeed tastefully different. How could the same food have two different taste extremes? Suddenly the ssamjang paste made from fermented soybeans developed a deep creamy taste, the chicken became juicier and the lettuce suddenly sweeter. The garlic pellets were meant to add to the allium taste but garlic is never on my not-to-do list.

In a twitch, the meal was done and worth every penny. I would have willingly ordered a second plate had it not been for the prices. Their fancy hand towels come in the size of a small tablet but expand once warm water has been poured unto them. Nice.