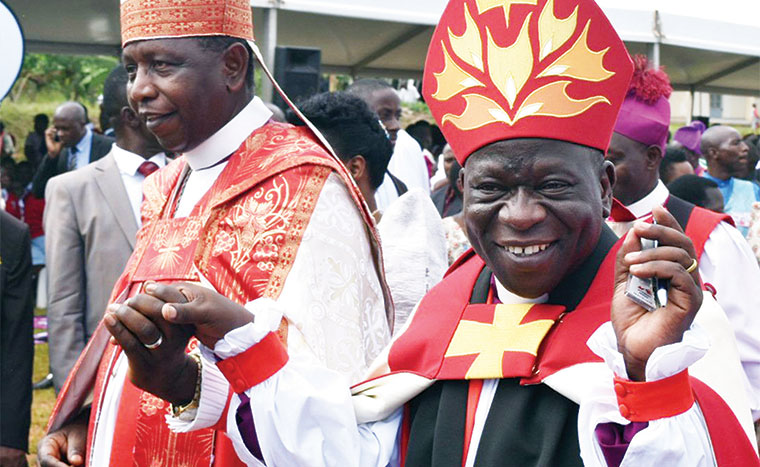 Bishop Bukomeko (R) after being consecrated by Archbishop Stanley Ntagali

His life has been full of twists; from surviving the Luweero bush war to seeking to become a boxer, Bukomeko played football for City Cubs and had dreams to become a banker before life changed abruptly to priesthood.

As he officially starts his journey of 10 years as bishop of Mityana diocese, he told The Observer about his remarkable life and what makes him tick.

At just 51 years, Bukomeko is one of the youngest bishops in the Anglican Church. He was born in a modest family but the instability in the seventies and eighties greatly disrupted his upbringing.

To overcome this, Bukomeko spent a great deal of his early life unsettled and always on the move between Luweero, Kampala and Jinja. The youngest of 12 siblings, a young Bukomeko moved to Jinja to join his brother, Enock Kizza, who worked as an engineer in one of the factories there.

Due to instability in Kampala during the Idi Amin era, Namubiru took back Bukomeko to Luweero. While there, he resumed studies at Luweero Boys primary school. When the NRM launched a guerilla war in Luweero jungles in the early eighties, Bukomeko recalls that he together with some teenage peers wanted to join the struggle.

“Life was hopeless and everything unstable…I thought the only way to liberate myself was to join the struggle,” he recalls.

However, his father became suspicious after detecting their movements and diverted Bukomeko by sending him to deliver a sealed letter to Namubiru in Kampala. Unknown to Bukomeko, the letter bore strict instructions for Namubiru to keep him in Kampala.

When Bukomeko insisted to be allowed to go back to Luweero, she got him a place at St Jude Naguru primary school that very day. While at St Jude, Bukomeko recalls how he came to love boxing.

“It was survival of the fittest and I had to learn self-defence skills,” he says. “I used to go to different makeshift gyms around Naguru…boxing was a lot fun and I seriously considered a boxing career when I knocked out some of my opponents.”

However, that dream was shattered when Namubiru shifted to Bweyogere. Bukomeko tagged along but didn’t study for a year because his sister was financially struggling.

“My sister was struggling to look after us because of the insecurity. As a young man, I never gave up, I got a wooden wheelbarrow and started collecting water from the streams and supplying it to the people of Bweyogerere. Sometimes I dodged classes to make some money for our survival,” Bukomeko narrates.

He would later resumed studies in P7 at Naguru Katale primary school, where he fell in love with football. “I had become rusty in the ring after a year out and I resorted to football. I was also on the school team,” he says. Indeed, he used to escape from school to go watch football matches at Lugogo, especially when KCCA FC was in action. “If I missed a KCCA game, I would go the following day just to watch them training,” he recalls. “My games teacher saw I was so keen on football and tried to help me join City Cubs.”

That dream again evaporated when he joined St James SS, Jinja for secondary school. Here, things did not work out well because Kizza also had his problems and was unable to fully support him.

“I was determined to continue with my education. So, I got an old bicycle and started buying matoke and charcoal from the rural areas and riding them to Mbikko and Nakibizzi markets along the Jinja-Kampala highway for sale. I also worked at construction sites as a porter,” adds Bukomeko.

“With faith in God, I cannot see my difficult background as lost time, I will never complain because God prepared me for future challenges. During my time as a porter, I learnt a lot in construction and to date I can still some building chores.”

HIS CALLING AND MINISTRY

Each time he returned to Luweero during holidays, Bukomeko recalls that he admired born-again youths there who walked from village to village preaching the word of God. He loved their enthusiasm and chose to live the same life; that’s how he came to pronounce the Lord to be his savior.

After completing A-Level at St James, Bukomeko chose to go back at his parents’ home in Luweero for good. Around this time, the pioneer Bishop of Luweero, Misusera Bugimbi, initiated the idea to mobilize Christian youths to join the seminary to study theology.

“When Bishop Bugimbi became our bishop, the Christian leaders brought him to our home. I liked his message of salvation and got saved again. Bishop Bugimbi also liked me and enticed me into Church ministry. I welcomed the Idea on face but at heart I didn’t…I wanted to become a banker and had started doing a course in accountancy” Bukomeko recalls.

“He [Bishop Bugimbi] first made me an informal lay reader at the cathedral in Luweero, but later recommended me to go to the seminary at Namugongo to study theology.”

Bukomeko felt relieved as he jubilated at heart. He made up his mind to board a taxi and go back to Luweero. But just a few steps after leaving the office of the diocesan secretary, his eyes landed on Bishop Bugimbi, who was parking his car a few metres away. Bugimbi stepped out and held his hand and took him back to the diocesan secretary.

“After a lengthy discussion, I was ordered to go back to Luweero but this time to pack me belongings to go and join the seminary at Namugongo,” he says.

Due to the immense respect for Bishop Bugimbi, Bukomeko obliged and in 1992, he joined Namugongo seminary to study theology. Still, he still harbored dreams of returning to a secular institution to complete his accountancy course.

But while at Namugongo, Bukomeko deeply fell in love with theological studies and dropped the idea of becoming a banker. On November 11, 1994, Bukomeko was ordained a deacon at St Paul Cathedral Namirembe by Bishop Samuel Balagadde Ssekkadde.  He later became a priest in 1996 and from then on, wherever he served, Bukomeko left marks of remarkable development projects.

This Journey started on January 27, 2020 as he set off from Nansana. On the task ahead, Bishop Bukomeko says he confident God will help him serve his flock well.

“My first primacy will be to work with Christians of Mityana Diocese and I am sure we shall accomplish unfinished projects of my predecessor before embarking on new ones” he emphasizes.

Throughout his ministry, Bishop Bukomeko gives credit to his wife Rose Nalongo Bukomeko with whom they have five children. “She has been supportive and I pray for God’s guidance as the Mityana journey starts.”

To this day, Bukomeko remains an ardent sports fan and at one time, he served on the leadership of his favourite side, Express FC. Even at the top level of football administration, Dr Bukomeko once served as a member of the Fufa legal committee.

On the international scene, Dr Bukomeko vows he will never walk alone as a supporter of Liverpool FC.