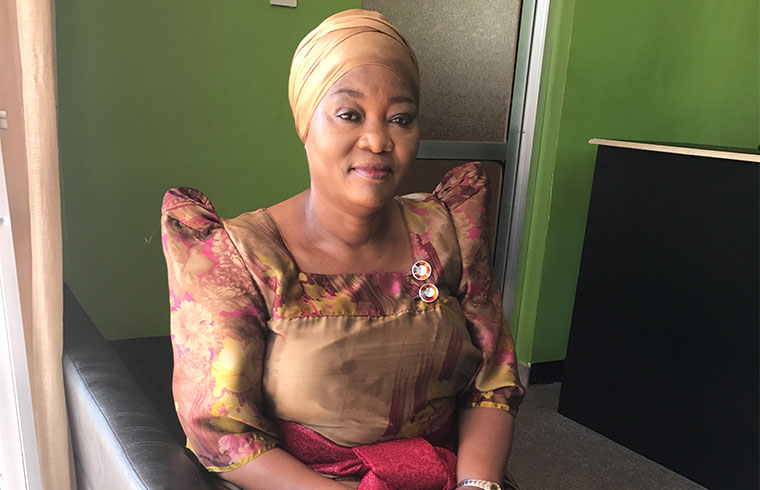 As a staff member led us to our hotel rooms, a busuuti-clad woman wearing a head scarf welcomed us courteously from where she sat at a table on the veranda.

Someone remarked, “That is the hajjat that owns this place.”

I did a double take. No make-up, no visible jewellery? Yet she owns the prestigious Hotel Brovad in Masaka?

Once I was done checking in, I excused myself and went back to look for Hajjat Sarah Nabukalu Kiyimba to see if she would talk to me at short notice. I found her in the gardens, where she was showing a European lady around and discussing possible business.

When she had a moment, I pitched for my interview and without hesitation, she asked me to pick my notebook and pen. I expected her to show me to a carpeted, air-conditioned office for the interview, but she led me back to the veranda where I had seen her earlier.

“I sit here in the morning and leave at 10pm. I have never owned an office in this place. I prefer sitting here,” the soft-spoken widow told me. “I am not an extravagant person naturally. Instead of buying fancy cars, I would rather expand the hotel.”

For a while, that seemed to validate the elephant in the room; all I have heard before about Hotel Brovad in Masaka is that there is a humble hajjat who is ‘fronted by big people’ as the owner, but the real owner is former Chief of Defence Forces Gen Aronda Nyakairima (RIP), among a long list of ‘real owners’.

“I have heard it all. They have said I am fronting for Gen Salim Saleh (President Museveni’s younger brother), Gen Aronda…but I don’t spend my energy on debunking those myths. I own this place solely,” she said.

What about the beautiful Brovad Sands Lodge in Kalangala? It too has been reported to be owned by Jolly Ngabirano (RIP), a sister to the late Gen Nyakairima.

“That is owned by my son, Rashid Kiyimba.”

WHO IS HAJJAT SARAH KIYIMBA?

Born in 1958 at Kalububbu in Sembabule district to Bumbakali Waakulira (RIP) and Mariam Namazzi, Hajjat, as everyone calls her, completed P7 at Kalububbu primary school when she was about 17, then married Hajji Kiyimba.

“I am grateful to God that I was well-groomed. We were not pampered, but ours was a hardworking family. We had to go to the garden before school – I was the eldest among more than 10 children,” she said.

She married Hajji Kiyimba in 1976 and had five children with him, but in 1994, when Hajjat was 35, her husband died and that was when her true hustle started.

“My husband was a coffee trader and owned a coffee processing plant, while I was a stay-at-home mother,” she said. “But when he died on a Thursday, the bank (Uganda Commercial Bank) came home on Friday and informed me that my husband had taken a loan of Shs 172m and they wanted their money back.”

At that time, the family home sat where the current Hotel Brovad sits, and her husband had laid a foundation and started building 25 rooms of the hotel on the same plot, but died before he could complete them.

“He had been to Nairobi several times and stayed at a hotel called Boulevard. That is what inspired him to register his as Brovad – his own variation of Boulevard.”

From this initial dream, she has expanded the hotel from 25 rooms sharing half an acre with her home, to currently 120 rooms on bigger land including a swanky executive wing whose rooms start at $100 (Shs 360,000) a night; by May, another wing with 42 rooms still under construction shall be ready.

Ordinary rooms start at Shs 105,000. When I found her taking the White client around, I had also noticed she was speaking flawless English – a testament, she later said, of her determination to make it against all odds, teaching herself English and business along the way.

Hajjat Kiyimba stepped into business first by selling a Nissan Sunny pickup truck her husband had left behind; she started buying and processing coffee, determined to service the loan and redeem the processing plant.

With a starting capital of Shs 4.5m after selling the pickup in 1994, after two years she had saved Shs 45m.

“I remember Brazillian coffee at the time had suffered a bad yield; so, Ugandan coffee was very marketable.”

But later the coffee market collapsed in Uganda; so, she moved to dealing in cotton, in Nebbi.

“I went with my brother and Shs 10m. We found so much cotton I had to come back and pick the other Shs 35m. By the end of that season – we used to gin in Pakwach – I had amassed Shs 85m, and started looking at finishing the hotel my husband had started.”

She used the money to fence off the hotel and finish the 25 rooms, but the money ran out before she could check in her first client.

“I approached the Asians I used to sell cotton to. They wanted me to go back to Nebbi for cotton, but I had run out of capital. I had a good working relationship with them, because I was trustworthy, so one gave me Shs 60m and another Shs 40m to go get them cotton since the region was insecure with the Lord’s Resistance Army rebels and they could not go on their own,” she said.

But when Hajjat Kiyimba went back to Nebbi this time, it was a bad season and she only made Shs 5m profit from that Shs 100m. With advice from friends, she decided to get a bank loan to complete the hotel.

“When a woman loses her husband, the world changes and flips upside down; so, I was not even bothered by what I looked like,” she said. “I remember I was even wearing a torn kitenge dress when I approached Development Finance Company of Uganda’s (now branding as Dfcu Bank) Juma Kisaame for a loan.” 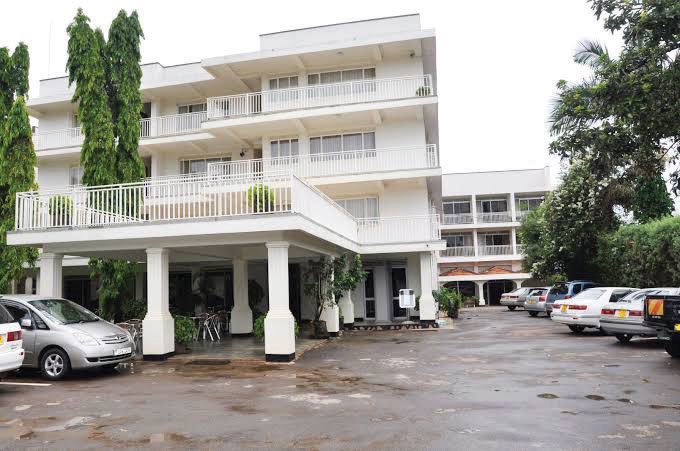 After due processes, she secured $250,000 in a loan from Development Finance through Bank of Uganda’s Apex Fund II. Hajjat Kiyimba was lucky that at the time, the loan required the bank to be directly involved in the project, “So, they never gave me cash but dealt directly with the suppliers”.

They even took charge of advertising for workers and interviewing them, and she got a one-year grace period where she paid only the interest of Shs 3m per month, before she could start repaying the loan. Every three months the bank would also audit the business, a process that instilled her financial discipline from the start.

Hajjat Kiyimba credits that bank process, passion and self-involvement in her business for her current success.

“I had two loans to repay; the old UCB one and the Development Finance one. I had to understand exactly how my business ran, from kitchen to every aspect. Within three years, I had paid up the loan.”

Earlier, she had also closed on the UCB loan and redeemed the coffee processing plant, which she still rents out to date. The bank loaned her an additional Shs 80m, with which she made Hotel Brovad storied, and added a conference hall.

She has managed to establish a good working relationship with her clients in all these decades, making her venture profitable enough to even grow other businesses on the side. Opposite Hotel Brovad on Circular road, Hajjat Kiyimba also runs furnished apartments for guests interested in long stay, while also owning several rental buildings in Masaka town.

“All that has caused people to say this is Salim Saleh’s business, but I don’t even have business partners.”

As we talked, we were constantly interrupted by people who stopped by her ‘office’; a building contractor asking her to order for another truckload of cement; a waiter delivering juice to guests, whom she gently reprimanded for not covering the glasses; new guests that she paused to greet gaily.

“I value my employees greatly. Most of my workers have been with me for long. The accountant has been with me since 1997,” Hajjat said.

Hotel Brovad opened in 1996. Even the current building contractor is the same man who has done most of the hotel constructions, renovations and expansion.

After losing her husband, Hajjat Kiyimba decided not to remarry.

“Many widows whose husbands left them with an estate to manage have been robbed by men. My husband was also my friend and I was his only wife; so, I was not sure I could be lucky twice.”

She has spent her life building her businesses and raising her children using the same principles that have shaped her life.

“The humility is due to my upbringing and my children are also like me,” she said.

Her first born, Saddam Hussein Kiyimba, 43, runs a restaurant at Garden City (Rays African Restaurant). Rashid Kiyimba, 39, studied tour and travel and established himself in the industry so well that he even constructed his first lodge in Kahendero-Kasese, which he later sold to Jolly Ngabirano.

Rashid then used his savings to buy five acres from Tim Lwanga in Kalangala, Ssese, where he set up Brovad Sands Lodge, one of the most popular destinations on the islands today. Aisha Kiyimba studied in Dubai for her postgraduate degree, then returned to start Fancy Tables, a high-end decorating company.

Sarah Kiyimba is concentrating on marriage for now. She is currently in the USA, having welcomed her first baby a few days ago, while the last born, Abbey, is pursuing a master’s degree in Dubai. That, there, is Hajjat Kiyimba’s greatest pride and joy; that, coupled with her business success.

“I am currently not servicing any loans. I am always happy. I am not drawn to fancy jewellery or cosmetics, and I don’t travel unless it is to shop for the hotel’s furniture and equipment.”

But she has invested in a beautiful, storied home a walking distance from Hotel Brovad, and if there is one thing she splurges on, it must be her busuutis; she wears a busuuti to work every day!