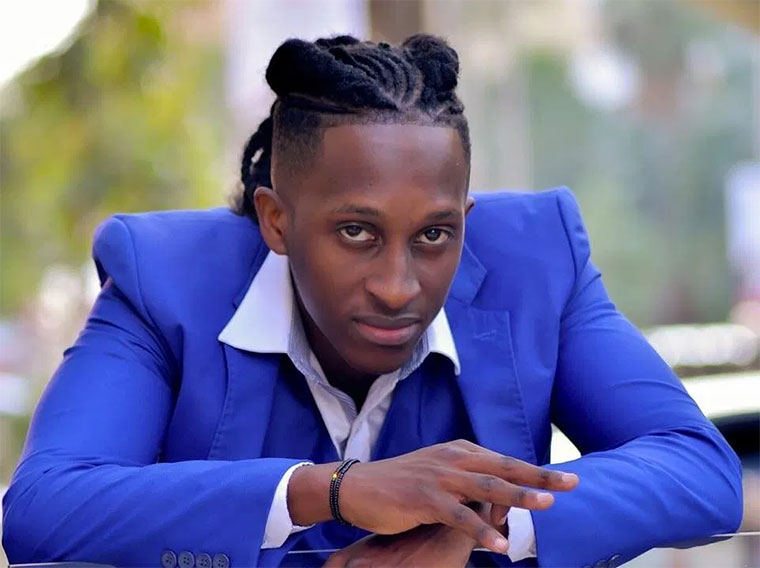 In 2015, Bruno K (real name, Bruno Kiggundu) was introduced to Uganda’s music scene through the Airtel Trace Music competitions where he was the first runner-up. Though he did not take the top prize, it did not stop him from pursuing his dream and years on, the RnB and reggae singer continues to wow us with his amazing vocals always accompanied by his guitar that he plays skillfully.

Quick Talk caught up with him at a friend’s home in Nakulabye.

Happy New Year to you!

Musically, it was a very good year for me. I released five songs – three videos and two audios, which did well. On a personal level, I made a few friends who have changed my life. I was very healthy and I achieved things that I won’t mention now.

Ok. How did you start music?

Throughout school, I was always in music, dance and drama though I never thought I would take music as a career. But in my first year at university, four of my friends and I started up the Pearl Music band. One day while performing at Centenary park, MC Kats spotted me and told me that he wanted to make me a star.

He took me to participate in the Airtel Trace Music competition where I came in second and from there I started a professional career.

But MC Kats is no longer your manager…

He was too busy managing Fille [who was also his partner] at that time and I felt like he would not give me attention; so, I asked him to let me move on.  He is still part of my life and he is always there to advise me when I need help.

You are so good at the guitar; can you play any other instruments?

I only play the guitar, but I want to learn how to play saxophone and keyboard this year.

If I don’t have studio sessions or shows, I wake up in the morning, pray, go to gym and work out a little bit. Then I go back home and play my guitar, listen to sermons from my pastor or watch movies and play video games. I am basically an indoor person. Plus, I eat a lot.

Hahaha…you eat a lot. Do you also cook?

[Laughs] Truth is, I cannot cook, because I grew up with my sisters and mother and I never used to cook. But I hope to learn soon.

You are a born-again Christian; what triggered that decision?

I became born-again at a time when I really needed God. I was having issues with my ex-girlfriend and going through a lot of emotional stress. A friend took me to Phaneroo [fellowship] and Apostle Grace Lubega’s sermons healed my heart and I decided to give my life to Christ. I think it is the best decision I have ever made.

Then how come you only do secular music?

Well…. you don’t just do gospel music; it has to be like a revelation. You have to be inspired by the Spirit to do gospel music and I am waiting for that time. [He says he wants the kind of gospel music one can listen to and get saved immediately.]

You are a ladies’ favourite; are you dating?

Hahahahaa…that is private. I decided to keep my love life a secret but when the time is right, I will talk about it.

So, tell me about the one that broke your heart.

I don’t like discussing it so much because it involves a person I wouldn’t want to put in the media all the time. [Aww, so thoughtful! Nonetheless, Quick Talk insists.] Well, all I can say is that it was a very bad relationship.

It was abusive and the girl disrespected me a lot even in public, but I thank God that I was able to escape from it and all the wounds have healed now. [No wonder Bruno K steered a debate on Twitter last week, on the need to protect men’s rights too, amidst a tweet storm surrounding various rape allegations.]

Can you date a fellow celebrity?

I cannot, because when I am dating, I need time and attention, and celebrities are ever busy. I am also a very jealous type and I cannot stand seeing my woman having all these men admiring her.

Well, there must be one you are at least crushing on…

Many people used to think Lydia Jazmine, but that was for fun, although she is beautiful. [Thinks about it some more:] I would go with NBS TV’s Sheila Nduhukire. She is very beautiful, intelligent, dresses decently, very inspirational; so no one wouldn’t want to date a woman like her.

What is the craziest rumour you have heard about yourself?

There are basically two. The first one is that people have called me gay, something I have never done and will never be. I was raised by Christian parents and I grew up seeing mummy and daddy. I have also heard some people saying that I bleach, another thing I have never even thought of doing.

Why do you think Ugandans misunderstand metrosexual men?

Some Ugandans are just still backward and conservative. As a celebrity, you are supposed to look presentable and smart because music is very visual these days. Just because I am always well groomed does not mean I am gay.

That’s really nice hair; how do you take care of it?

I don’t do much. It is just good- quality hair. I go to the salon once in a while especially when I am going to plait, but I don’t over take care of it. [Bruno’s spots shaved sides and two thick cornrows on the top.]

It is just a tattoo I got when I was a young boy experimenting with life.

Not a tribute to some Hanifa, or another special person?

[Laughs shyly] That is homework for my fans.

If you were to change something about yourself, what would it be?

Nothing. Everything about me is amazing because God created me in His own image and had plans for me.

I do it to people who say negative things about me and I not only do it on social media but also in real life. I don’t like being around negative people and when you start being negative, I cut you out of my life.

Year 2020 is just at the beginning, what should your fans expect?

I am going to release more music. I have collaborations with Nina Roz, John Blaq and Don MC and the video for the song Wannimba, which I did with APass last year is going to drop soon.

So, my fans should expect nothing but good music.