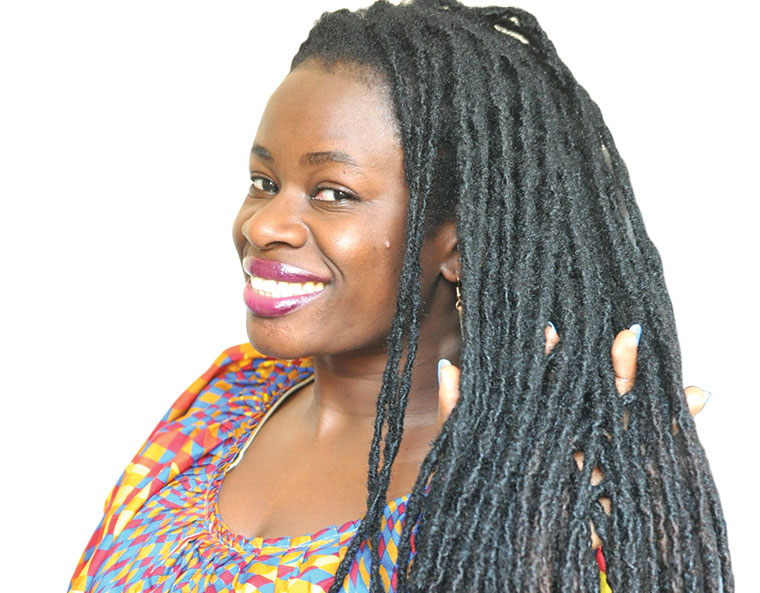 Dreadlocks 20 years ago? You were either a Rastafarian or too defiant and non-conformist for ‘normal’ hairstyles. Fast-forward, and today that has changed.

With the natural hair craze most people are embracing lately, natural locks have an edgy and classy look to them. Not to mention that they are the latest money-minters in town.

A decade ago American comedian Chris Rock released the documentary, Good Hair, highlighting the importance (and wealth) African-American women attach to their weaves and hair extensions. He sadly discovered after all his travels, that African, kinky locks were totally useless; no one wanted to buy them.

Well, Chris Rock needs a sequel, because our natural hair just became a big deal. The longer and neater one’s locks, the more one earns when one cuts them off. Hair stylists and natural dreadlock freaks are willing to pay big bucks to help another woman with thin hair walk around with a full head of hair. In 2013, Lillian Birungi trimmed her straight perm hair to prepare for dreadlocks.

“I wanted something that would not make me go to the salon more often. I hate combing straight perm hair in different styles each day,” Birungi says.

After two years, her locks had become a part of her. She enjoyed the freedom of washing, moisturizing, and quickly moving on. Her locks could be styled, braided, even plaited to accommodate weaves and wigs. Then last September – with her dreadlocks five years old – Birungi yearned for a new look.

“My locks had grown to my back. After cutting them off, I washed and kept them at home until a friend tipped me about a possible buyer [six months ago],” she says.

“My locks were more than 100…I left happy, but more perplexed that my natural hair could be sold,” Birungi, whose natural hair is long again already, says.

So, like someone with a fishpond, could she be ‘rearing’ her hair for steady business now? She bursts into laughter.

“That’s a big joke! It took me five years to get Shs 180,000. For a business, I will expect returns in more than five years from 2019 which is quite long and unrealistic,” she says.

The business of wigs, weaves and braids is enormous, and so are natural dreadlocks. Ronnie Atwine, owner of Ronnie Dreadlocks in Nakulabye, says there is no shop dealing in natural dreadlocks, but dealers are known to one another.

“It’s true people buy natural dreadlocks, but you won’t find us with signposts like artificial hair dealers. People allege that we cut locks from dead bodies, but those are myths,” Atwine says.

Atwine bought Birungi’s locks and sold some of them to a guitarist.

“The gentleman was my longtime client with short dreadlocks. In his group of guitarists, one of them had a wedding and he needed a different look. I stitched Lillian’s hair on his [short dreadlocks so he could] hold his hair in a puff at the back,” he says.

I bring that minor detail back to Birungi and she is shocked that a man is wearing her hair. According to Atwine, males that frequent reggae and youthful events ask for natural hair more than females. In most cases, his clients want to ‘fit in’.

For instance, he gets more clients as the annual Nyege Nyege festival approaches.

“The natural dreadlocks business is seasonal, but worth it when clients flood in. We also get more clients on demand around December when [Ugandans from the diaspora] jet into the country for the festive season,” he says.

Whenever he gets a seller, he gives them a chance to set the price depending on their need. The price varies with seasons.

“Six to eight-year-old locks can go for more than Shs 1m, but those are mostly bought by persons working abroad. Locally, people want to look nice but they are not willing to pay beyond Shs 300, 000,” Atwine says. “This is unfair to someone who invested time and money in growing their dreadlocks.”

To clients that are not financially stable, he uses natural-looking artificial locks from Afro-Kinky instead, but these usually give men a feminine look.

To sell or not

In her early 30s, Olive Telma Kweberaho has lived with natural dreadlocks for eight years now.

“I have a small head but my hair is too packed. I have scars on my face and ears because of the hot combing, the reason why I settled for natural dreads. I frequently made Bantu knots (bituttwa) every bedtime, and it’s time-consuming,” Kweberaho recalls.

With this hassle, she has not found a perfect buyer for her hair. Her dreadlocks look absolutely gorgeous. Her soft-textured, thick and dark hair hangs below her waist in dreadlocks.

“I have been approached by people and also tempted to sell my hair, but no one can afford it. I have met people who need just a few short locks cut off at Shs 300,000 to Shs 500,000, but I refused,” Kweberaho says. “The least my hair can go for is Shs 15m. I have heavily invested in it and I’m not ready to give it away to people who don’t have the patience to grow theirs.”

She has mastered styling her locks and wears head wraps to keep it clean. The executive director at Center for Domestic Violence Prevention (CEDOVIP), Tina Musuya, says she cannot sell her 11-year-old dreadlocks even if she got the highest bidder.

“I would rather donate than sell my hair. I am not too desperate. Selling hair is no different from one who sells blood to others,” Musuya says.

“What if the buyer commits a crime and detectives find parts of my hair at the scene? People don’t look at that side, but it is possible. With a donation, I would know who has my hair in case I am being framed about something.”

Apparently, Musuya’s locks stretch to her derriere, but wears them up for fear of being ‘stolen’ – for the second time. In 2017, five of her more than 200 locks were stolen at a salon.

“This is funny, but I make a census of my locks and record figures in my journal,” she starts. “I had a Congolese hairdresser, but when he relocated to Canada, I had to find a perfect replacement. While washing my dreads at the new salon, they cut my hair up until some were very short and others were half way.”

The female hairdresser denied chopping Musuya’s locks when confronted after the “census”, but “she looked guilty and surprised that I count my locks”.

She says just one of her locks could easily be split into five and sold cheaply. If they had collected more locks from her, a chunk could go for Shs 300,000 to Shs 500,000 or even up to a million.

Musuya vows not to cut her hair no matter the length it grows.

“I am proud to be African, because my hair defines me. Unfortunately, our hair has been a point of discrimination and annoyingly people think that [dreadlocks are] associated with criminals, drug addicts and filthy people, among others,” she says, urging people with natural hair to watch out for hair thieves.

In 2013, the BBC reported about a one Jack Maseko who was mugged by three men in South Africa; the thieves took nothing more than his mobile phone and dreadlocks that he had been growing for three years. This practice is reportedly widespread in parts of South Africa.

One question that nags Kweberaho is: “Is that your real hair?”

“I am tired... It’s like a whole interview explaining to strangers by the roadside. Others don’t have the courtesy to say hello and go straight to touching your hair to feel if it’s natural. Sometimes, [I am] in a bad mood and have been rude to some,” Kweberaho says.

She adds that dreads locked from synthetic extensions are expensive to maintain but people are impatient with their natural hair. For instance, one packet of Afro-Kinky costs Shs 12,000 and one with thick hair needs at least one and half packets, for starters.

According to Musuya, natural locks are lighter on the head. She explains that synthetic hair comes with chemicals that often lead to hair loss.

“There are myths that African hair can’t grow, is hard to comb and manage. The whites don’t buy African hair but black women are accustomed to wearing [white people’s hair]. Are we mimicking something? Why don’t we believe we are beautiful the way we are?”

The natural hair movement is energized but the public continues to have a negative attitude towards this look.

She adds that the public believes people with natural hair are stingy and poor while most salons look at them as a burden because they cannot sell certain products to them. Salons make it so expensive to get a service, she says. In sourcing this article, women wearing natural hair harvested from other heads declined to talk on record for fear of the stigma.

Even Birungi expresses concerns about being possibly judged for selling her hair. “I know people will judge me after reading this...,” she says.

Her hairdresser Atwine is no exception. His staunch religious family was ready to disown him for growing dreadlocks despite earning off the same business. Now to impress his mother, he keeps a bald head, to the confusion of his clients, but maintains a big beard to bond well with them. Kweberaho was denied a job opportunity.

“A relative connected me for this first job interview but the panel told me to first cut off my natural dreadlocks. I had invested Shs 200,000 to lock my hair but I didn’t get the job,” she recalls. “I gave up on the job but my family was another issue. They were bitter with my dreads but have since accepted me. My hair is clean, neat and they envy it.”

Unlike treated hair that requires frequent salon visits; natural dreadlocks come with some relaxation. Atwine advises that twisting natural hair too tight and too frequently can thin it and weaken the base of one’s lock.

No matter one’s work environs, the hair should be washed at least twice a month with warm water. Kweberaho last washed her hair from a salon two years ago – everything is done at home, save for re-twisting. She saves between Shs 30,000 and Shs 50,000 normally charged on washing and drying such long locks.

For a quick sell of your locks, Atwine says they should be free from hair food products and jelly. Such products cause dandruff and attract dust. He recommends dedicated hair sprays that come with less oil and are good for natural dreads in addition to having a healthier scent and keeping your locks shiny.