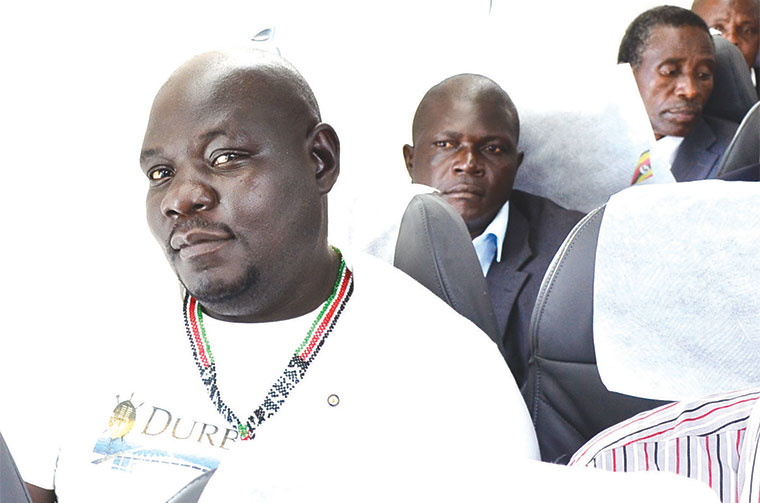 Edward ‘Dismas’ Kiwanuka (L) on the flight to Mombasa

This was the airline’s sixth destination, before adding Kilimanjaro a week later. Quick Talk was pleasantly surprised to be seated next to Kiwanuka, famous for his hilarious MTN ads where he goes by the name Dismas. After the pleasantries:

Everyone calls you Dismas; is that your name?

Edward Kiwanuka is my name, I am 41 years old.

Tell me about your background.

Where do I even start? I have a very rich background. I come from Masaka, from a family of nine – eight girls and one boy. My mother and father are both retired teachers.

I [stayed] in Kenya; my parents had gone to teach there in the 1980s when we had war in Uganda. We came back to Uganda in 1987 and settled in Masaka – Gayaza, just 2km from the centre.

That is where I started studying my P3 in 1987 in Kijjabwemi primary school. From there I joined Kimaanya Blessed Sacrament School, then on to Masaka Academy, before coming to Kampala.

My father was willing to pay my fees for A-level and university, but I didn’t want that. I was too focused; I wanted to be a mechanic. So, I went to Spear Motors training school.

From there I worked with One Engineering, also inside the Spear Motors complex. Then I went to Dar es Salaam for further studies in Diesel Fuel Injection. I specialised in a component of the diesel engine called an injector pump. Be it a generator, truck…anything that uses diesel needs that pump and that is my specialty.

How did you end up in advertising then?

As I was pursuing my courses and started working; Nakawa [where Spear Motors is based] and Kyadondo rugby grounds were not very far. I used to go to Kyadondo and picked interest in rugby.

They would support their teams but in a different way. Rugby fans are people who went to good schools – the high-end schools – so, me being from Masaka, rugby was new to me.

When I started supporting rugby, I found them [morale-boosting] in English. So, I started singing in Luganda, Lusoga and other local languages. Because, we would go to Nairobi and when we’d sing in English, Kenyans would sing in Kiswahili…they made us feel out of place.

I would blend that local singing with the vuvuzela. I was so enthusiastic about my club, and that is how Nile Special spotted me. They started sponsoring me at different events.  I never looked back. I did an advert for Milkman, and that is when MTN saw me and they said they needed someone who is naturally funny, but not an actor.

Basically rugby took you to MTN...

Yes, and I am not regretting the deal with MTN. I cannot disclose how much they gave me, but at least they gave me mileage.

Why of all names did you choose Dismas?

It was the content director. He writes the scripts and the name is Dismas. I just execute the script.

And the beautiful lady in the data advert at a bus stop. Did you know her before then?

No, I only met her that morning; we were introduced and started shooting.

That advert offended some feminists, meanwhile…

To be honest, I cannot do something to offend people. Just leave it at that. [A group of feminists cried foul and wanted MTN to change the advert because it was promoting sexual harassment.]

Well, are you married?

Yes I am married. I have been with my wife for the last 14 years, but we officially married in 2011. I have three children. [A Muganda man who ‘counts his children’, at last! Sigh!]

Dismas, sorry Edward, would you state that you are faithful to your wife?

[Laughs:] I am faithful…I am so faithful to my wife! [He laughs again, as the pilot announces the flight’s arrival in Mombasa, interrupting the interview for a while].

Do you have a deal with Uganda Airlines?

No, but as an influencer, I was invited to come and have an experience with Uganda Airlines and then clear the myths that have been circulating about the airline.

[After about 110 minutes in the air, Uganda Airlines Bombardier CRJ900 touches down at Moi International Airport, Mombasa – by the way, Kenya is doing enviously well in the number of international airports they have, compared to our lone Entebbe!

Quick Talk loses sight of Dismas – sorry, Edward – in humid Mombasa as the formalities kick off.]