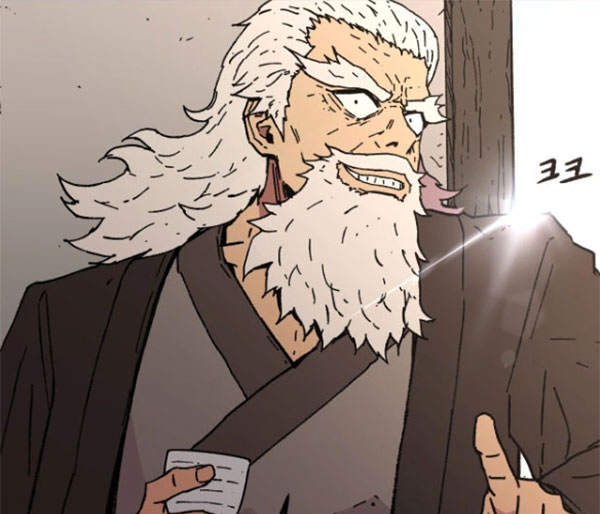 I don’t have the highest opinion of Manhwa (Korean comics), which is why it has been ages since I read one.

The art is unrivaled, but the stories are always so flimsy. So naturally, my encounter with Peerless Dad was completely accidental. I was fascinated by this one image of a strong, bare-chested man lying on his back, seemingly sound asleep, his limbs tied to the posts of a bed with thick rope.

On a website littered with wide-eyed heroes in flamboyant outfits and crouched in combat poses, here was this man, ropes holding him fast to his bed, tiny babies sleeping peacefully on his chest. I simply needed to know more.

The fact that Noh Cyungchan, the author, was also responsible for Red Storm did not even occur to me. The story, as it turns out, isn’t your typical fantasy Manhwa. Noh Gajang, the protagonist, is an ordinary man, a martial artist but also quite ordinary.

He knows his limits. He understands his insignificance in the unyieldingly violent world of Murim. And once he secures his position as a low-level guard at a Murim Clan Office, Noh has no illusions about his career prospects.

He also doesn’t care. The world around him is bracing for an apocalyptic conflict between the great powers of Murim but Noh has more important responsibilities. His wife gave birth to triplets and then died. Noh, talentless as he is, will do everything in his power to afford his children every opportunity the world has to offer.

If that means taking on financially lucrative assignments that keep pitting him against impossible enemies, so be it. This Manhwa is amazing. I can say that much about the first 60 or so chapters. The first few stories are so well-paced, not as verbose as you would expect despite all the character development and depth they provide.

True to its name, this Manhwa is concerned with the life of a man determined to become the world’s greatest father. If that sounds dull to some of you, don’t worry. Peerless Dad is categorized as ‘Fantasy/Martial Arts’. If all you want is action, this Manhwa has you covered. ‘Murim’, if you did not know, stands for ‘Martial Arts World’.

And yet, I would argue that the story is actually at its best when it is concerned with Noh’s fatherly duties. I emphasized the first 60 chapters because they, in turn, emphasize Noh’s family drama. The protagonist is such a likable fool. He’s also really poor, so you can’t help but cheer him on even when desperation drives him to make the worst decisions.

And his children are adorable. But in the more recent chapters, the author has decided to broaden the scope, highlighting the larger Murim world and, honestly, I’m bored.

It’s a shame because the story was so entertaining. If you care, Peerless Dad has a direct connection to Red Storm. Some of you will probably appreciate these latest chapters for that reason alone.