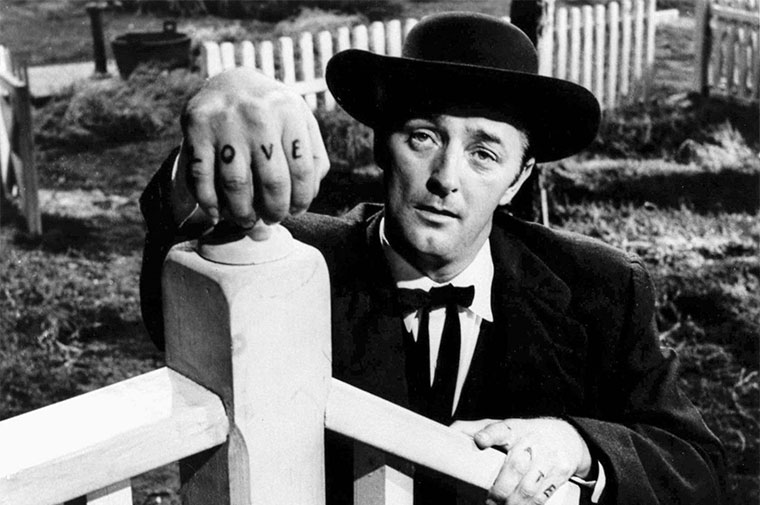 Driving his car, Harry Powell looks to the sky and says, “Lord I’m tired. Sometimes I wonder if You really understand me. Not that You mind the killings; Your book is full of killings. But that there are things You do hate Lord. Perfume-smelling things, lacy things, and things with curly hair.”

As I started to understand the language of cinema, I stopped perceiving movies as basic ‘good guy vs. bad guy’ stories. I now know that it is a case of the antagonist and protagonist’s lives intersecting to spark a great adventure. I always identify with the antagonist.

The more I like the antagonist, the more I love the movie. There is something to be said about a villain who you love and loathe in equal measure. These are the bad guys who make your stomach churn, your lip curl, and your blood boil.

If you forced me to pick one among all the vile human characters I have encountered in my cinema history, I would probably point you towards Reverend Harry Powell from The Night Of The Hunter.

The Night Of The Hunter is a 1955 live-action adaptation of a 1953 novel of the same name by Davis Grubb. It also draws from the real-life story of Harry Powell who was hanged in 1932 for the murder of two widows and three children in West Virginia.

In the 1930s, Harry Powell is a self-appointed reverend who travels along the Ohio River murdering women after marrying them for their money and justifying it as doing God’s work. He is eventually arrested for driving a stolen car and imprisoned in the same cell as Ben Harper who murdered two men in a $10,000 bank robbery.

Harper lets slip of the incident in the presence of Powell, but does not reveal where the money is hidden. After Harper’s execution, the newly-released Powell heads to Harper’s hometown, earns the trust of the town’s folk while wooing Harper’s widow, Willa.

He makes Willa the focus of his efforts, believing that she must know where the money is hidden. He terrorizes and tortures while also convincing the delusional widow that she is a sinner and he is helping her atone for her sins in the eyes of God.

When he overhears Harper’s son tell his sister he knows where the money is, Powell concocts an elaborate plan to murder Willa before turning his attention to the Harper siblings. The amounts of child abuse Powell dishes out makes your stomach churn, your lip curl, and your blood boil. To top it off, he performs all these atrocities with a smug sense of righteousness and a certain level of likability that keeps your eyes glued to the screen.

No matter how much I hated him, I could not look away. I was not that shocked to learn that The Night Of The Hunter was voted the second most influential movie of all time, behind Citizen Kane.