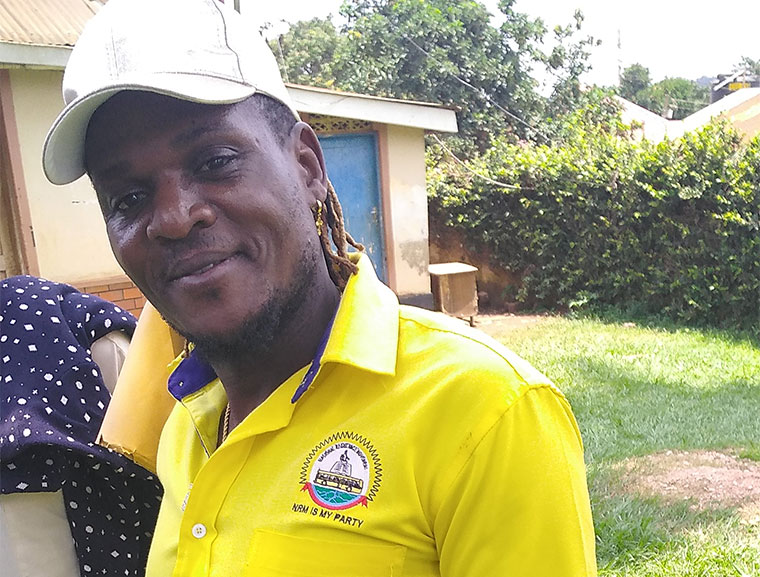 Michael Mugwanya, commonly known as King Michael, is a local musician. A few years ago he was a household name with his Muko Muko, but fast-forward, not many people remember him as a musician apart from his beef with Full Figure and his connections with Brian White. Quick Talk caught up with him at Calendar Prestige hotel in Makindye.

That ka-yellow shirt! Ragga Dee has like 10; how many do you have? [Michael is wearing a yellow shirt and blue distressed jeans, with his trademark dreadlocks; the shirt has the inscription ‘NRM is My Party’]

I have many. By the way, I bought them. These are not donations as you journalists may think.

I see. Now, where have you been?

I have been around. I had given music a two-year break but now I’m back and I will soon be on top of this game.

I have been compiling an album and it’s almost done. It has 17 songs from different studios; the title of the album is Wiggy Wagger. I have done two videos and still shooting some. I have songs like The Big Party and collabos with musicians like Jose Chameleone.

Good for you… Your concert last month flopped. Mbu. What went wrong?

[Laughs and more assertively:] The show was 50-50. I can say I was surprised by the turnout because I had been off the scene for two years!

My music was almost forgotten but still people came to see what I had in store… I hope next year I will have more people. It is unfortunate it coincided with the coming of an international artiste [that was the same day as the D Major concert in Lugogo.]

You invited NRM big shots but they did not turn up…

That’s true, but I’m not happy with that. Tulina okwebereramu [we should support one another]. They should have come to support me the way they do to others!

I have supported NRM for 18 years. If I organize a concert, they should be able to support me and even [sponsor adverts].

[Throwing hands in the air:] Right now I need some financial support. I have many debts from my last show. [Quick Talk hopes Plot 10 Kyadondo road copies…]

So, who did you invite?

[Counting off his fingers:] I talked to Mike Mukula and Ruth Nankabirwa, among others, but none turned up. I even put a yellow table for the NRM guys, but they did not turn up!

We need to help each other for the good of the party and musicians. I know the letters reached them.

Let them not wait until my feet are nailed together to rush to come and help me; the time is now. [He is referring to Hajji Abdu Kiyimba’s nephew, who was last week assaulted in Kyengera and his assailants nailed his palms together with his yellow NRM beret].

Why didn’t you use Bebe Cool’s studio? [With support from President Museveni, Bebe Cool runs a studio that any NRM-leaning musician can use to record their songs.]

I do my things my own way; so, nobody tells me where to record and how to do my music.

OK, let’s slow down; those tattoos [on the arms] where else can I find one on your body?

Only on my arms. [He shows Quick Talk one of an anchor] This one makes me strong.

What happened to you and Bryan White?

I was an endorsement at his charity group The Podium. When my two-year contract ended, we parted ways.

I now concentrate on my music. I sacrificed my music career for The Podium project. By the way, I went there to look for money, which I have got.

I had money, but it wasn’t enough and the industry needed a lot of money; so, I had to go to The Podium to get money to push me for five years.

Let’s talk family! Are you an irresponsible father? [One of his songs suggests so.]

[Laughs] That was just a song! But my family is good. My wife is called Rhona Ndagire. I have four children, but Rhona has two.

And when did you last take Rhona out?

She doesn’t like partying and going out, but Ndagire likes the salon; pedicures, manicures…things like that, and I also provide.

But you cook for her?

About six months ago, I cooked mashed potatoes. This is the easiest thing to cook.

Did I miss the wedding?

[Laughs] It is coming; but you journalists are always talking about our marriages. We don’t see your wives, but you are always on our necks; yiii, mwebereremu.

How many pairs of shoes do you own?

I can’t count; I love shoes and I think I have countless pairs and I still shop.

Eh! And your wardrobe?

I have many suits [Quick Talk points out that he has never seen Michael in a suit.] They are many, but I don’t wear them often.

If you were to change one thing…

You love your party! And if you were not doing music?

I would be a pastor telling my followers that it is right to belong to NRM. [You NRM guys…you really should have supported this man’s concert. Eh!]

If you were a president for a day…

…One day? I would chase away foreign investors and give opportunity to Ugandans. I would also give tools of trade to musicians.

You have met Museveni; why didn’t you tell him that?

He promises and his promises take long … he promised me a house and a studio but I have not received anything; probably there is someone standing in the way! I know he will fulfill.

King Michael was born in 1981 to the late Charles Katumba and Betty Kasule of Najjanankumbi, Entebbe road.