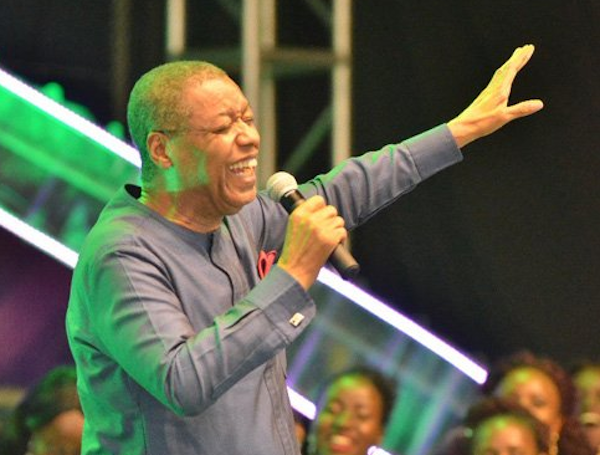 Fun, tears of joy, praise and worship were the prevailing mood on September 1 at Zoe Fellowship in Lugogo, where legendary American worship leader and pastor Ron Kenoly was performing.

A few minutes past 10 pm, Kenoly took over from the event lead organizer, Prophet Elvis Mbonye, and ministered in songs including Sing Out.

In a stimulating string of continuity, the internationally acclaimed 70-year-old artiste asked the crowd to sing along with him, saying that whatever problems they were facing could not overpower God.

Kenoly’s used scripture and testimony to punctuate his songs, launching into his soothing I see The Lord, as the congregation harmonised.

Kenoly testified God’s ability to solve seemingly impossible situations, saying he and his wife welcomed their first child after a long period of childlessness.

“I am not divorced, I am married to the same wife for more than 40 years and we have three beautiful children,” he said.

He took the sharply dressed congregation on a journey with All Honor, Ancient of Days, Anointing Fall on Me, Mourning into Dancing, For the Lord is Good, Be Glorified, Jesus is Alive, Worship the Lord, Hallowed Be Your Name, and Lift Him Up, among others.

The crowd loved him. There were sing-alongs and screams of joy.

It was a complete transition from the energetic performance put on by opening acts that included Edwin Ruyonga, Rachel Kay and the Zoe Ministries choir.

Democratic Party president Nobert Mao, the minister of Works and Transport Monica Azuba Ntege, and the Kyabazinga of Busoga William Kadhumbula Gabula Nadiope IV, were all in attendance.

By the time Kenoly ended his performance a minute to midnight, fans wanted an encore.