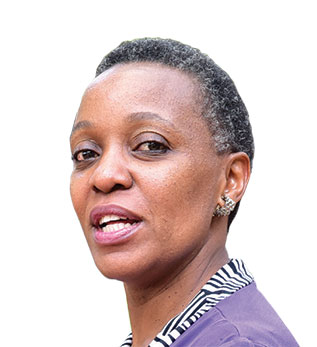 Veteran actress/producer/director Irene Kulabako talked to Quick Talk about her career in a lively conversation at her Ggaba-Bbunga production house. Kulabako, who most recently starred as Mrs Kimbale in Queen of Katwe, is wearing a purple top and blank pants for the interview, her almost completely grey hair worn in a simple haircut.

Man, you are greying and not bothered by hair dye? Is that a feminist or political statement?

[She spots that famous ‘Janet cut’]

Wisdom! [She has an infectious loud laugh] At this stage, with life experiences, I must be wise and that’s what I tell my children and family members.

I’m approaching my 50s and maama… There are those in the 60s without grey hair [Really? They possibly just have a good relationship with their dye]… maybe grey hair at this age is a sign of wisdom. I’m wise!

I can’t argue on that! Where have you been?

I have been around, people were used to seeing me on TV, acting, but now I direct dramas, TV series, documentaries and a lot of other social and development-related films and plays. This is an opportunity to give young people [chance] to showcase their talent. My passion has always been being behind the scenes… directing.

Is there something you’re working on?

Yes! It will be coming out next year; we will have a new drama series. We are working on the scripts, getting the actors and also fundraising to get the project running.

What will the public be seeing?

Life and challenges in Uganda; leaders, office …. It’s going to be a love story… it will be talking about dynamics in offices, politics, intrigue and also you and my life after office; how life after work affects work.

What could the title be?

The title keeps shifting, but we will inform the public when the right time comes.

From actress to TV personality; why the change?

I last acted in the movie Queen of Katwe, but I have not been approached …. If an opportunity came, I would love to act. I tried acting and directing, but it was too much; I settled for directing.

You act in English. What happened to your Luganda version?

[Kulabako has never acted in Luganda, despite speaking the language fluently.]

There are certain things that God gives you and some He keeps to Himself. I’m a disaster at acting in Luganda. I learnt Luganda later in life [her entire primary education was in Kenya] I learnt to speak English before I knew how to write. I learnt it on TV.

Wedira ki? (Which clan do you belong to?)

Neddira mamba (I’m from the mamba clan). You think I’m not a Muganda? [laughs heartily.]

Hehe. I had to check! You have done many projects; which ones stand out?

I don’t think I can weigh one against the other. One builds upon another’s skills.

I like working on projects that give me a challenge, not solutions. There was a film we did called Stone Cold, which involved children dying in a quarry. We had to create special effects such as rain, accidents… this was quite challenging!

This demand for local content by the Uganda Communications Commission; can it be achieved?

It is possible and it can be achieved 100 per cent. I’m on the side of producers; I have worked for TV for long and I strongly believe it is possible. UCC could not have come up with a policy that was not thoroughly researched. I started with UTV (now UBC) and it was 75 per cent local content; that’s what I used to see… the industry would die if there was no uptake of local content.

People are right on quality but producers can up their game. We realized there is poor quality and people now know poor quality will not sell.

By the way, is acting what you always wanted to do?

Yeah! I started from primary school; leading songs, imitating teachers. I was fun [Kulabako is still a very bubbly person].

Your standards as an actress were high…kudos! You carried yourself with esteem and dressed well; what changed with today’s actors?

I work with some of them but they are not taking time in acting. Actors don’t research. Look at how they dress… when you talk to them, you realize they don’t read much… they only read the [scripts]. Some rush and don’t take time to grow; they don’t challenge themselves and don’t give you anything new.

How is your marriage [she has been married for years to Joseph Kakembo]?

[She looks at Quick Talk in a ‘whaaat?’ way, then laughs] Interesting. It’s exciting. Marriage is what you make it and want it to be; the truth is that the two of you must figure it out.

How many children do you have?

Hmmmm it’s a choice. Funa abaana bosobola okulabirira (have children you can take care of). I’m never too busy for my family; God first, then my family.

Good philosophy. Let’s talk about your wardrobe. What takes the biggest portion?

My clothes; formal, wedding clothes, office, but majority are trousers. I feel more comfortable in trousers. I prefer dressing casually and I don’t wear make- up regularly.

And how many pairs of shoes?

I don’t know. Not because they are that many… most of them are open sandals and I have few for weddings and meetings.

Okay, if you were to change something about yourself, what would that be?

I don’t think I would change anything. I love music; maybe I would try singing. Acting and dancing I do, but I failed to sing [laughs.]

The grey hair! No dye, no wig? I am pleasantly surprised.

I like being myself. I think sometimes one need to be themselves. Dying is a personal choice, so long as they are happy.

At your age, women are buried into something: career, family, God or witchcraft; where do you fall?

[Laughs hard and loud] I was going to say all, but I remembered witchcraft. Five years ago I fell sick and that was a turning point. Priorities changed. One morning I was fine, the next day I was on my deathbed. I thought I was dying but when I overcame it, priorities changed. I realized I had to give more time to family and God.

The most important thing is family and that’s the extended family. I have never gone into witchcraft.

If you were a president for a day, what would you change?

Oh! I would enforce the local content law… I would make sure it is enforced. It is selfish, but I would do it. [Minimum broadcasting standards by Uganda Communications Commission, require broadcasters to air at least 70 per cent local content in terms of culture and language diversity.]

Both your parents are doctors. Yet you chose acting.

I knew you had to ask that. Yes, they are medical doctors, but I’m a love doctor.