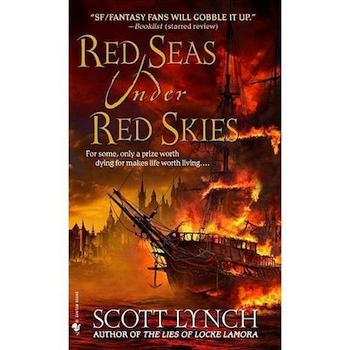 Locke Lamora and his friend Jean met their match in the Grey King. They came out victorious but lost every coin they had ever stolen, every friend they had ever known and even their secret identities as the Gentleman Bastards.

So they fled to Tal Verrar, hoping to start over. It did not take them long to set their sights on the Sinspire, the wealthiest and most dangerous gambling house in the world. Locke and Jean only had eyes for Requin, Sinspire’s merciless master.

Everyone said Requin’s safe was impenetrable. But none knew what Locke and Jean had done in Camorr. And they wanted to prove once more that the Gentleman Bastards were unstoppable.

I could spend hours railing against Red Seas Under Red Skies, the sequel to The Lies of Locke Lamora, but I won’t. I want you to first understand a few important things. Scott Lynch, the author, is a great writer. There is an appealing style to his words. The descriptions are crisp and clear, and the interplay between his characters is vivid.

You can practically hear the clever interactions as your eyes trace Lynch’s words on the page. And to be fair, the plot that Lynch presents in this novel is clever. Red Seas Under Red Skies is basically Ocean’s 11 situated in a medieval pseudo-Spanish setting.

All the components of the heist are well-constructed. You understand the enemy and why he is so formidable, and it is fun following Locke and Jean as they concoct their lies and identities.

But enough of the niceties. I hated this book. No, it wasn’t a terrible book – it had its redeeming qualities. But after about 200 pages, everything falls apart when the author decides to take us out to sea.

Forget that he completely abandoned the heist, a plot he had spent so much time developing. Forget that he continued to make Locke the most insufferable protagonist I have ever met.

Requin, Locke’s target in this novel, is not a villain. Yes, he’s merciless but the gambling business demands it. He does nothing to earn Locke’s determination to take his prized possessions, and yet Lynch actually expected me to cheer for Locke in his attempt to steal from Requin. I couldn’t.

Locke is a horrible human. He deserves every bad thing that comes to him. But again, this isn’t about Locke. This is about the pirate nonsense that constitutes the largest chunk of this novel. Red Seas Under Red Skies is what happens when authors become self-indulgent.

Put simply, the second half of this novel delves into pirate life in Tal Verrar and its surroundings, and Lynch goes to great lengths to describe life at sea; the anatomy of pirate ships, pirate lingo, the lifestyle they pursue and so on.

This goes on for hundreds of pages. At some point, the novel is like an in-depth guide to piracy, and that kills the story. I don’t remember the last time I was this mind-numbingly bored.

+4 #1 paulgggg 2019-09-02 15:12
Hahaha, Requin is not a villain. Did you even read the book? He is the head of the criminal underworld, collects people's hands before showing them the cobblestones.

Oh and by the end of the book he's as good as the new dictator of tal verrar. I suggest you read the book it's all in there u must have skipped
some pages
Report to administrator