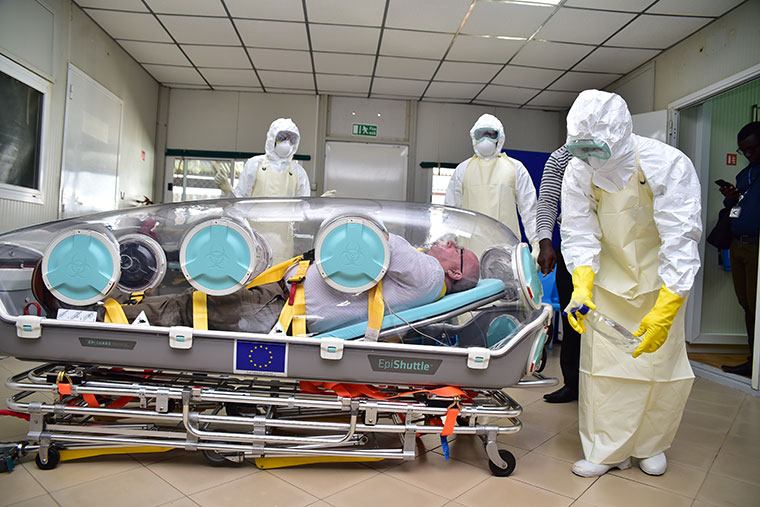 Medical personnel run trials of the Epi-Shuttle at Entebbe

Massive deaths from Ebola and other infectious diseases are set to be controlled by the new Epi-Shuttle, an ambulance stretcher donated to Uganda, that allows medical personnel to attend and safely transport a patient without exposing themselves to disease.

NICHOLAS BAMULANZEKI was on hand to watch the successful drills in Entebbe. What often starts as a single person suffering from high fever and severe internal bleeding spreads from person to person and into time becomes an epidemic, killing dozens before attaining global attention.

This is how the Ebola outbreak, an often fatal disease, starts before killing people in large numbers. In 2014, a Norwegian woman got infected with Ebola while in Sierra Leone but efforts to place her in a safe isolated place turned to be tedious. The biggest sticking point arose with transporting her to where she could get the best medical care.

It took days for medics to transport her back to Norway, where physicians from Oslo University Hospital administered to her the last remaining dose of ZMapp to treat her. It was a stitch in time that saved her life.

However, most of the people who contract the disease die and as recent as last month, several people in nearby DR Congo died of Ebola. In fact, this contagious disease is mainly traced around the Uganda-DR Congo border.

Since that incident of the Norwegian patient, scientists and physicians at the Oslo University Hospital embarked on a mission to create a manageable mechanism to handle the epidemic. So, there was need for a safe bio-containment process of moving patients from one area to the airport and off to Europe.

Early this year, the Norwegians came up with the Epi-Shuttle, a bubble shelter that acts as a medical isolation and transportation system. It is a complex stretcher, which, according to experts, costs about $30,000 [about Shs 110m] to make.

There are only six in the world and last month, Norway rolled them out to the world by donating two of them to DR Congo, the worst-hit country.  Two more are in Dubai and one remains at the headquarters of the World Health Organisation (WHO) in Geneva.

The sole remaining Epi-Shuttle made its way to Uganda a few weeks ago and between August 10 and August 13, it was put on trial in at Imperial Botanical beach in Entebbe. These four days involved specialised drills conducted by a team from WHO, United Nations, Joint Medical Stores (UNJMS), UNDP, European Union and the Oslo University Hospital, who trained about 20 Ugandan medical personnel from Bwera and Naguru hospitals, the UPDF medical wins and Fort Portal hospital.

The hope is that in future when Ebola breaks out in any part of Uganda, this Epi-Shuttle will be used to safely transport patients to safe areas to receive specialised treatment without endangering the lives of the medical personnel.

This, according to Dr Carl Robert Christiansen, a paramedic from Oslo University hospital and overall coordinator of the drills, could be the best possible solution to overcome the epidermic.

“This was a successful infection prevention and control exercise,” he told The Observer. “The Epi-Shuttle is basically an ambulance stretcher to transport patients but at the same time you can biologically isolate the patient, meaning that there is a barrier between the patient and the outside world.”

Dr Christiansen adds that the Epi-Shuttle is not limited to just Ebola but may also be used to tackle other infectious diseases.

“Though the main focus is on Ebola, it is meant for all high-threat pathogens like chicken pox, Marburg and can also be used in operations of chemical warfare. So, Uganda will be able to transport highly-infectious patients without putting any risk to the outside world or medical team giving treatment to the patient. The key issue here is safety by not putting anyone at risk of contamination.”

Dr Christiansen says choosing Uganda for the Epi-Shuttle was based on its track record with managing Ebola outbreaks in the region. The decision was also reached after the consultation with WHO, EU and Norwegian government, which donated the Epi-Shuttle.

“We are hoping that should Ebola strike Uganda again in future, the Epi-Shuttle will be used for medical evacuation of patients in this region,” he said. 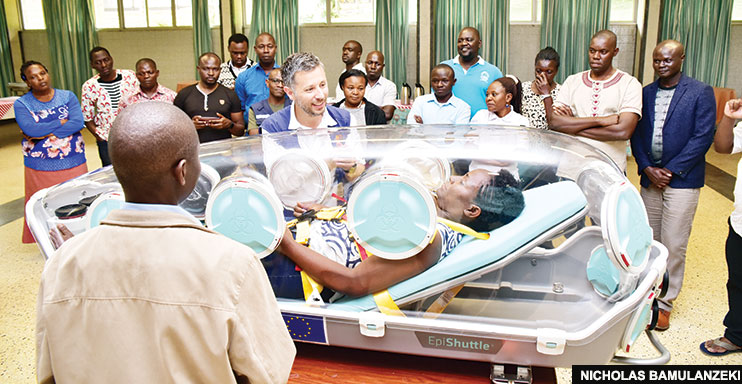 Dr Christiansen was also impressed with the Ugandan team and is in no doubt the country will not suffer high rates of infectious disease fatalities.

“I found out that the Ugandan team has many highly-competent people with diverse skillsets but highly focused on infectious and the problems around their medical treatment. It was also a learning experience for me, especially in the team-building process to create a conveyor belt process.”

A closer look at the shuttle reveals many details. For instance, it was a considerable amount of supplies that can be used simultaneously. This is completely new technology that allows the patient maximum comfort and allows clinical staff to accompany the patient on top of treating the patient inside the bubble.

It also gives the patient a degree of flexibility to be at an angle of comfort. On the Epi-Shuttle are several glove spots where the carers can put stuff that the patient needs like water or even a phone or anything that can help the patient from inside.

Dr Simon Bagumaho, a WHO medical officer emphasised that the shuttle will not be used for any emergency.

“I know there is a lot of excitement but this is purposely meant for frontline workers to epidemic response,” he said. “It is meant to be able to move patients from deep field to the best infectious disease hospitals around or a specialised place for isolated treatment of patients.”

He added that the Epi-Shuttle is reusable and is insured with Cigna insurance and WHO.

“It can be used again after 24 hours after decontamination. When it comes to evacuating a patient abroad, there is an arrangement with Phoenix Air can to take the patient to USA or Europe,” he said.

Dr Christiansen said there are plans to make more Epi-Shuttles in future but it is still a complex process that requires attention to detail due to the sensitivity of the work.

“There is not even the slightest room for error with the Epi-Shuttle because it can lead to many fatalities if an infection like Ebola escapes into the atmosphere,” he said. “However, there is realisation that the need for the shuttles is likely to increase; so, we would have to consider making more shuttles.”