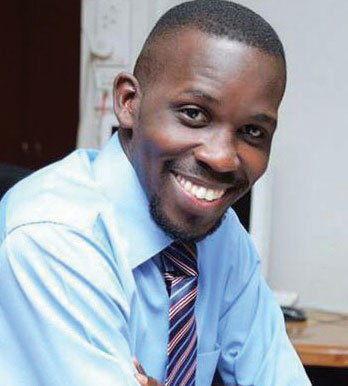 Joel Ssenyonyi is a former NTV news anchor, who quit the job after five years to join the People Power movement as their spokesman.

Quick Talk found Ssenyonyi in Kamwokya after a meeting.

So, what was the meeting about?

Ooh this one? We normally have so many with politicians, different people, media… you found me in a meeting with Mr Kyagulanyi (Bobi Wine). The day is filled with meetings; we find it important to polish up a couple of things.

So, who is Ssenyonyi?

Joel Ssenyonyi is a 32-year-old Ugandan who has worked in the media for over 13 years where I began in 2006 at UBC as a news anchor. I started when l was 19 in my S6 vacation. Recently I thought of making my contributions in another way for the goodness of our country.

From business reporter to politics?

I have always had an eye for politics.

I hear your family is staunchly NRM…

Which family is that? [Yours, apparently] There are those who, for example, think Reverend John Ssenyonyi of UCU is my father, but we are not related at all. We just share a name and also come from the same place in Nakasongola.

Yes, most don’t believe it, but that’s it.

Isn’t your mum scared of losing her first born in all this?

Of course like any parent, they get concerned, but my family including my mother, is very supportive because I am an adult and know what I am doing. They pray for me and always look out for me.

So, do you have any other team supporting you apart from your family?

My friends too are supportive; my church Watoto recently started training for the church members that are involved in active politics and those who want to stand. That ongoing training is very important to us as believers. For people that have been involved in my life, this doesn’t come as a surprise.

People have been asking me to stand in various places – some in Nakasongola where l come from, Kampala Central, Kawempe North – but honestly I have not made up my mind yet, but I will soon.

So, how far with your law course?

I’m doing my internship. [The interview is paused as Joel makes a phone call]

I heard you talking about guys dating women instead of doing what took them, on the phone; are you dating currently?

Hahaha... what did you hear?

I heard it all; so, are you dating?

Eeehh [smiling] dating is relating, you mean like having a relationship with a friend? Because I have so many of them.

Okay. Do you have a girlfriend?

[Laughs] I have many friends who are girls.

Huh! Are you in courtship?

[Smiles again] What is courtship?

Oh my! Do you have a lover, or tolina waaka [as your boss would sing]?

Hey, hey, sirina waaka? [shaking his head] Who has told you that I haven’t dated before? [Well, a small bird told Quick Talk Joel is ‘waiting until marriage’].

I hear you are a virgin…

How do you do that with all the beauties around you?

It is not a rare thing for starters; there are many virgin men out there like myself, but they are not in the media like I am. However, it’s a discipline one cultivates. I for example, told myself years ago I will only have sex with my wife. I am not married yet, but when I marry, I will do it.

That doesn’t mean it’s easy; there are many temptations and more come in when you are in the limelight, but you take a stand and decide like I did that I will have sex when I marry, and only with my wife.

God helps me because I am human, because if He does not help me, [raises his voice] I am in trouble, oh my goodness!

What is wife material?

Ahhh… a woman who loves the Lord, someone who is a friend. I want to marry someone who is my friend because when you fight with a friend, it’s different because you know at the end of it all you are still buddies.

I would also love a person who loves people because I deal with people.

If you had to choose between Miss Brains or Miss Beauty?

[Quickly:] Both. Why not? There are many women who have both, and that’s the kind I will have. I don’t necessarily want a politician like me or a person who understands politics, although if it comes that way, well and good.

Do you crush on the fine girls?

Well... [Shaking his head] sometimes I see God’s creations that look good, but l don’t get eaten up. I have seen so many beautiful ladies over the years, but I can’t see something and be like ayahhh!!! I just appreciate God’s creation and move on.

How many children do you want to have?

When I marry, it would be good to have a discussion with my wife, but I guess three is a fair number and I hope to be a Ssalongo (father to twins). It can hopefully be triplets…aah…nekiggwera awo [and it ends there].

Would you wish your children to conduct themselves the way you have?

Are you kidding me! I have enjoyed my life to the fullest and I have not even started yet. But the Bible says train up a child in the way of God such that when they grow up, they don’t depart from it. I would like my children to grow up with discipline, but that doesn’t mean they shouldn’t enjoy life.

I was too stubborn but very active, I was too inquisitive; whenever I went to town with my mother, I would ask about everything. In senior one we had our clique; we were stubborn but also very serious with school. We were always among the top ten. We would make noise in class but were also very focused.

Is there anything you can’t live without?

Metrosexual, gadgets guy, sportsman; which guy are you?

A bit of all, but metrosexual because I get a haircut twice a week. I even want to run right now to the salon [touching his head and looking at his watch], I should have gone yesterday but I was busy.

But the head looks fine still...

Ahhh… just a touch-up to keep it organised. I pay a bit of attention to what I wear, and for people that come to my house, it is a bit organised.

I do, but I am so busy so there are people that come and clean at a fee; an old lady that normally comes with the son and they wash clothes, clean up and so on. Not economical.

Because if you had someone you call your own around…

Eh maama… but marrying a lady does not mean that you have married a house girl [Touché!]

I’m impressed by your stance. These days women work too; so, you will find both yourselves tired in the evening. So, you need an extra pair of hands like a maid.

[Quick Talk lets Joel go for that haircut after a very entertaining chat].